Snow Queen? A CGI film? If you got to see the film cover, it had a tagline at the bottom that states “A Magical Adventure in a FROZEN Land!”

It also states that it is “From the Legendary Hans Christian Andersen, Author of The Little Mermaid.”

I haven’t reviewed a cheap knock off Disney movie yet, unless you count Chop Kick Panda, but Dreamworks isn’t Disney. But this one clearly has to be right? It capitalizes the word Frozen in its ad, and also makes a true but misleading claim about where the story comes from.

Eh. Maybe I can wait a bit.

For those of you who actually know the original Snow Queen story, this one basically seems to follow that exact same plot. Down to a letter. Nothing new about this one, just an animated tale of a famous story. So I guess, its like any book to film adaption. Since I don’t know the Snow Queen story, it is basically a new plot for me.

Basically, mirrors be crazy. This woman got so mad, she became a Snow Queen (Cindy Robinson) and tried to put the world into an endless winter. She also wants to destroy all art, for some reason. She really hates this glass maker dude, who has mirrors that reflect the soul. So she kills them. Whoa.

Well, he had children too, so the threat to her rule isn’t gone. Boy, Kai (Marianne Miller) and girl, Gerda (Jessica Straus) become orphans and don’t even remember each other. Eventually, the Snow Queen realizes that they are a threat, and sends a troll named Orm (Doug Erholtz) who has the power to turn into a black weasel only, to kidnap the boy so she can presumably kill him too.

Gerda, just realizing she has a brother, gets rightly pissed off, and journeys across the land, with the troll and her own weasel, to try and save him.

On the way they run into land pirates, crazy plant ladies, and just bitter harsh cold. 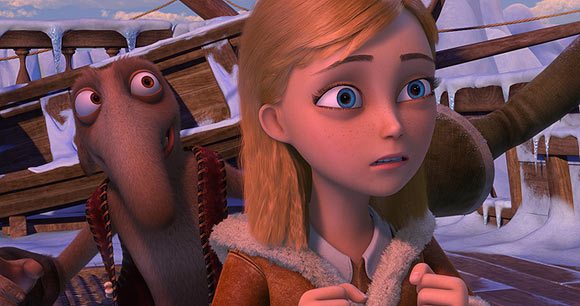 I am now going to imagine that as the face of every troll on the internet.

Alright, turns out I was wrong. This movie is NOT a cheap Disney knock off. Besides the fact that it is a movie of the actual story, it also was made by Wizart Animation. Who are they? A new CGI film company out of Russia (making this film foreign), and this is their first release. It came out last year and was in development for awhile, so the Frozen thing is basically a coincidence. Obviously not their advertising of it, they are still trying to latch on to its fame, but the idea wasn’t a copy cat. Heck, they also are already working on a sequel.

Unfortunately, the animation was the worst part of the movie. Something seemed off about it the whole time, it is pretty obvious it isn’t using state of the art / new technology to bring us this movie. Probably pretty old technology, graphics wise. Reminded me of a video game.

I actually enjoyed the story line and some of the visuals in the film though. By the end, I was getting a bit tired of it, sure, but the early parts of the movie kept interest for awhile. The crazy plant lady came out of no where, but looked really cool as it went down.

Nothing I will say will convince you to watch this film, and honestly, there is probably no reason to. But if you are forced to watch a newish animated film, there are a lot worse you could pick.