Ever since Rubber came out, we have all been thinking the same thing. When is the next “horror” film involving a normally non sentient object coming to life going to come out and blow us all away?

Rubber was weird. Rubber was ground breaking. Rubber had some existential questions that were never going to get answered, and it lead to a lot of confusion.

But what about Pants? People usually like pants, and people usually like rubbers (hehhh). Some people really hate pants. Can we have pants go on a killing spree and hurting people? That is what some Canadians asked themselves I guess, most likely really late one night, and that is now why Slaxx is in our lives and wants to party. But not at a pantsless party. They would hate that discrimination. 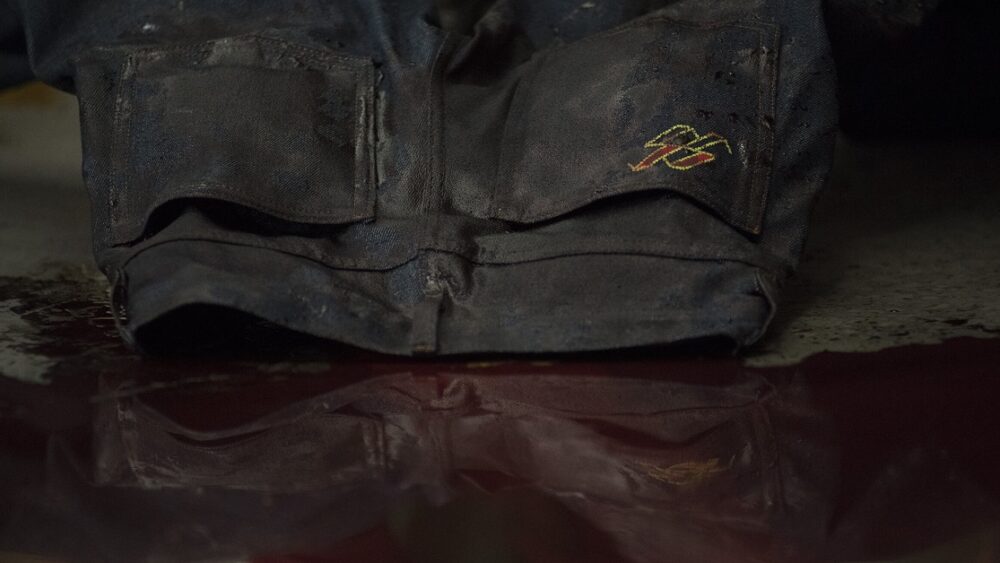 Is it absorbent? Can it soak up blood stains and not show?

Libby McClean (Romane Denis), who definitely has a name like that, is a bright eyed, bushy tailed young lady who is ready to make her mark on the world! How? Well, she just got a job at the ~~coolest~~ trendy fashion store ever. It is the best. Everyone likes it, and they have great sales and cutting designs and they do good for the world too. They really care about life and helping others and, well, fashion.

She gets to work on a very important night for them, because they are about to do a new product launch! This is something really special, a one size fits all pair of jeans. One that more perfectly forms to fit the wearer and learns their shape quickly. Its all in the fibers, or something.

And sure enough, once the door is locked, and someone wears the product early, they find themself quietly offed. And then the pants moves around to strike again.

There is a lot riding on this night for the store and its stakeholders. But maybe this is a pair of pants with a conscious? Maybe it is trying to right some wrong? Maybe this is about how the fashion industry is ruining the lives of people around the world? Who knows!

I’m gonna fight ’em all,
A nine pants army couldn’t hold me back.

And yet, here I am, extremely disappointed. It was a comedy horror, but the comedy elements were just forgotten about it. I guess it was light hearted a bit. Was that the comedy? Was it because of pants killing them it was just hoping that was hilarious enough? Was it supposed to be the level of extreme that some people felt about pants, or the influencer’s presence? Was it because the pants danced to Indian music? I don’t know, I just know I never laughed and thus the disappointment.

The message is fine. It raises some good points about the fashion industry and exploitation and how corporations try to seem woke but often lie about what they do in real life. Just hide and deflect and promise to change while changing to a different harder to detect bad method. You know.

But honestly the message really didn’t deliver by the end either. Not even the message of extreme commercialism and the need for something new. I thought the ending was pretty poor. Even the explanation for the pants was relatively poor, but it was better than I figured it would be going in. I literally thought it was supposed to be demonic, so that is a plus.

Slaxx didn’t deliver anything to me that it seemed to promise. It wasn’t funny or scary, it was just weird, but not in a good way. And with this conclusion, I can say, I still am not a fan of pants at all.