Skip to content
HomeUncategorizedSky Captain and the World of Tomorrow

Hyping up these things is getting hard. But mostly because the next few are pretty meh, until I hit 1500.

What? Yes, what I am saying is welcome to my 1300th review, bitches. Time for a Milestone Review.

I think I have the next few figured out too. I am continuing with my theme of mid-2000s movies that I heard were terrible, never saw before, and want to give them a chance.

I remember seeing trailers for Sky Captain and the World of Tomorrow. Even my 10-12 year ago self thought the film looked too CGI and weird. But now it is a decade later. Maybe it was one of those films ahead of its time, like Speed Racer?

Or, maybe it is just terribad and perfect for the mid 2000’s. 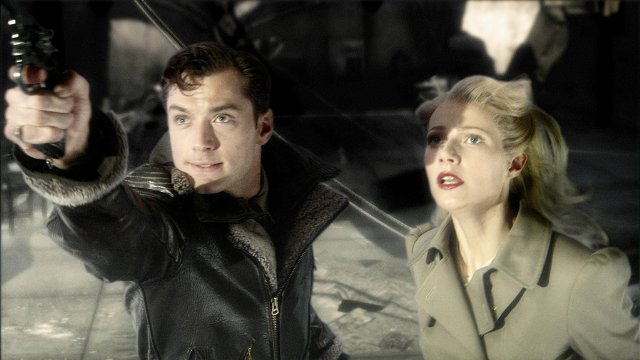 Alternative history. And not just a history where I watched this movie 11 years ago. I’m talkin’ 1930’s. I don’t know the exact differences, but technology is a lot better in this timeline. We got Zeppelins. We got scientists. We got shenanigans.

Specifically, some famous scientists are disappearing and and no one knows why. Also not a lot of people care. So there is that. Some dude disappears at the start of the film even! 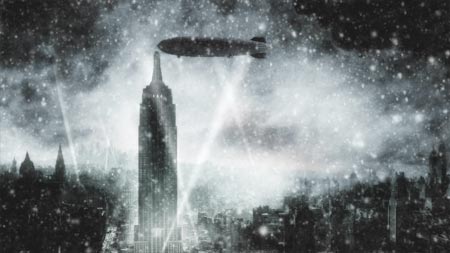 It’s amazing they could land (perch? float next to?) so well in that weather (snow storm? smog gas? volcano explosion?).

Wait, one person might care! Polly Perkins (Gwyneth Paltrow) who is playing another character with the initials PP. She is a journalist and she just so happens to be looking into the missing scientists! Crazy! She is the one who cares.

She gets a secret message to meet up for information on who the next scientist to go missing will be. After heading out, she is surprised to find Dr. Walter Jennings (Trevor Baxter)! Some Dr. Totenkopf is getting all of the scientists, and Walter thinks he is next because he is the last of the group who worked on a secret project. SUDDENLY! GIANT ROBOTS ATTACK THE CITY. 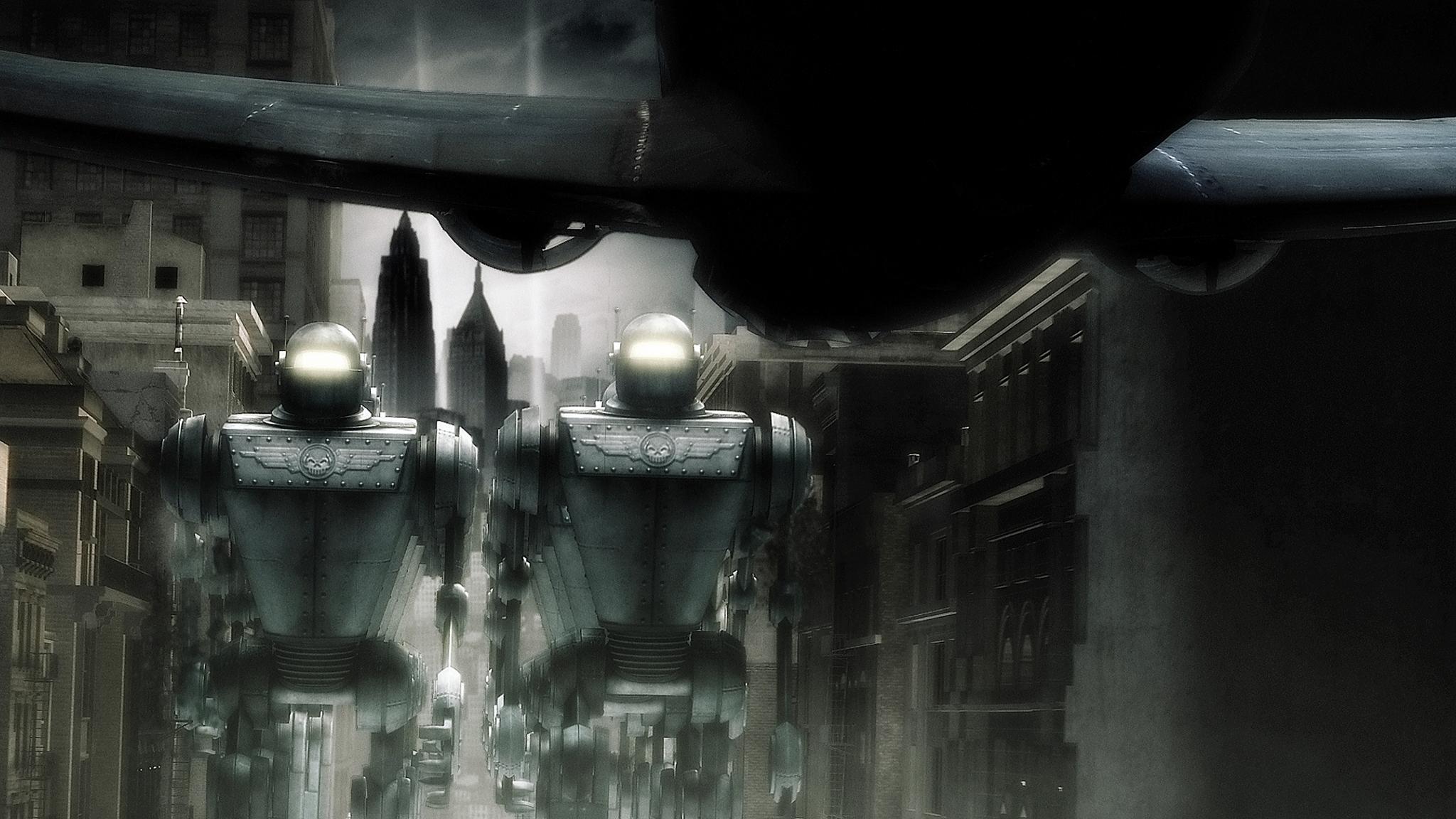 Marching two by two, just like Moses said they would.

The robots seem to be indestructible. I don’t think they are technically attacking, they are more just walking the streets and looking like an army. The police collectively shrug and realize they can’t win, so they call on “Sky Captain,” a dude who owns his own private air force in New York called the Flying Legion. The Sky Captain is just Joe Sullivan (Jude Law). He is able to take out one of the robots using a bomb and making it fall down. I guess that is good enough for them.

The rest of the robots GTFO of town, back to outer space or who knows what. Joe saves Polly and takes the broken robot back to his base. Turns out Joe and Polly have a past together. They used to date, but Joe blames Polly for interfering too much and almost getting him killed. But she has information, so she can tag a long for now. 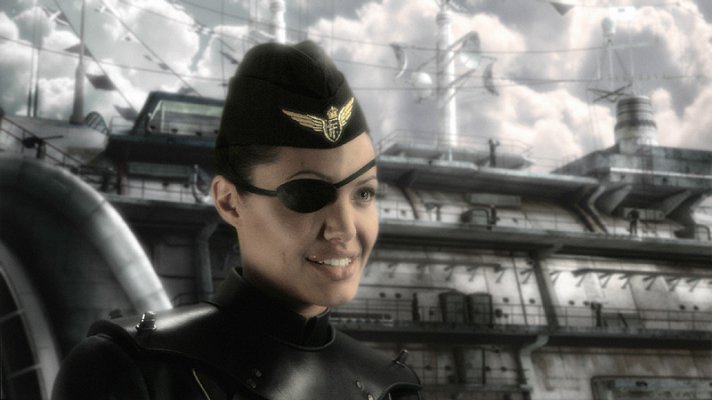 If you came here for this like everyone else, then I have some disappointing news.

So, Jennings is almost dead. Damn. Too late. But before he croaks, he gives Polly two vials. Very secret these vials. They are apparently what Dr. Totenkopf is after. Joe don’t know ’bout the vials either, how sneaky. So that sucks, scientist is dead. Oh well, YOLO, back to the base, they find out science guy has found out secret information!

Oh no, the base is also now under attack, but by drone robots! But that means the scientist might not be able to tell us the news he found out! Yep, he gets taken during the defense. Oh noes!

Turns out he found out the origin of the robot control signal, so they know where to go to stop them. And it is on Earth! And hey, before he was taken he left them a map. Pretty sweet. So they head down to Tibet and the Himalayas! 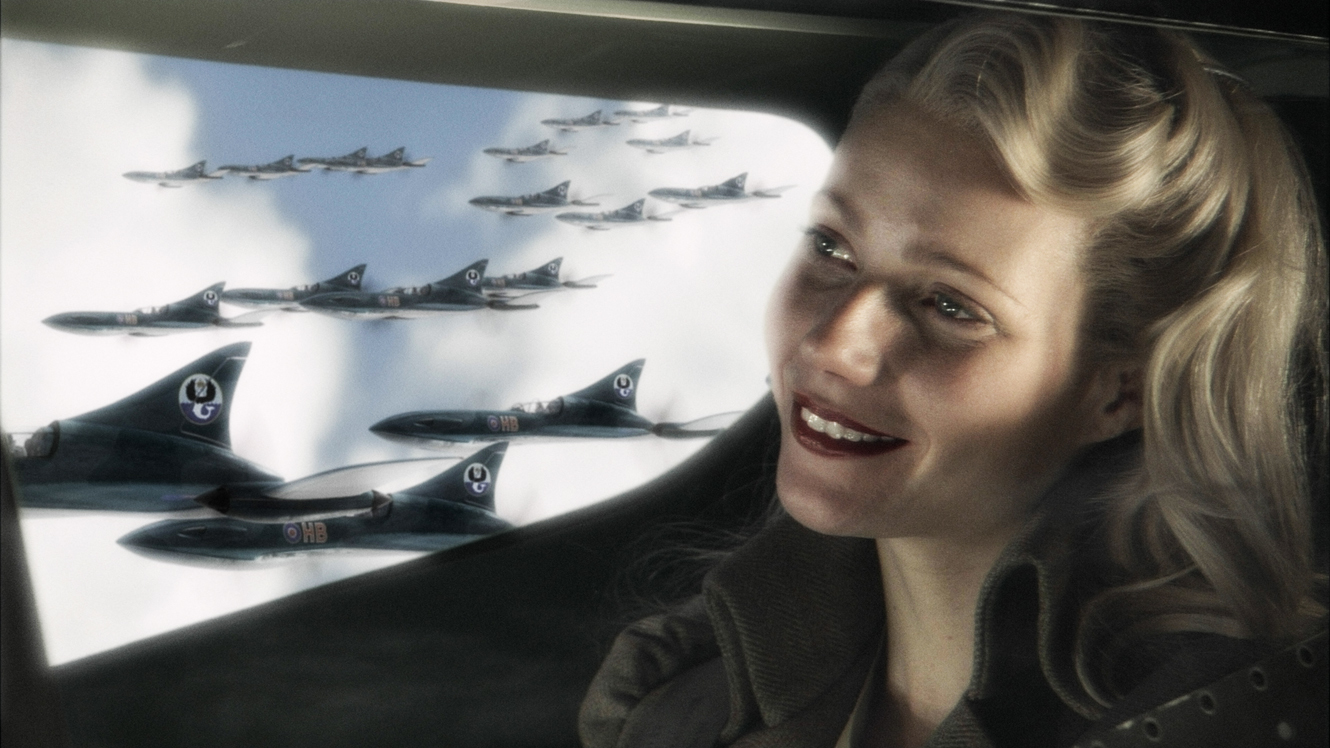 What a relaxing plane ride!

Over in the mountains, Joe meets up with his old friend Kaji (Omid Djalili) and they all laugh and have good times. They get double crossed by some peeps, and almost blow up! Next thing they know, they are in Shangri-La. The evil doctor used monks to mine uranium. K. But the doctor is in another castle, so they have to go find him again.

And nowwwwwwww we finally get to meet Commander Franky Cook (Angelina Jolie), who commands her own Royal Navy flying force thing. They help Joe find the secret island of Dr. Totenkopf. Using submarine boats, they break in and find it inhabited with weird dinosaur like creatures. Shit, they also find robots hoarding animals into capsules. Two by two, a whole lot of different species.

Oh shit, they are going to Noah the Earth! 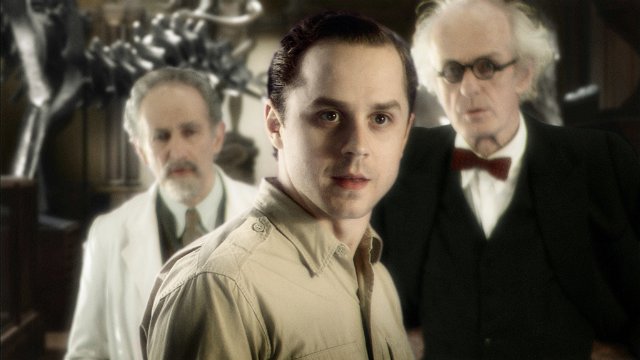 Did you guys notice me say Moses earlier?

Looks like the evil Dr. wants to reset the world. He is loading all the animals into a rocket. The rocket will blast off, blow up a lot of the world, then eventually return and repopulate. The World Of Tomorrow. In case you are wondering about the vials, as you should be, they actually contain the “perfect human” DNA. A new Adam and Eve.

So does that mean the doctor wants to kill himself? Not at all. He died twenty years ago. OHHHH SNAP.

That’s right. But the robots he made have been continuing with the plan, doing shenanigans, killing people, and all that jazz. Fucking robots. 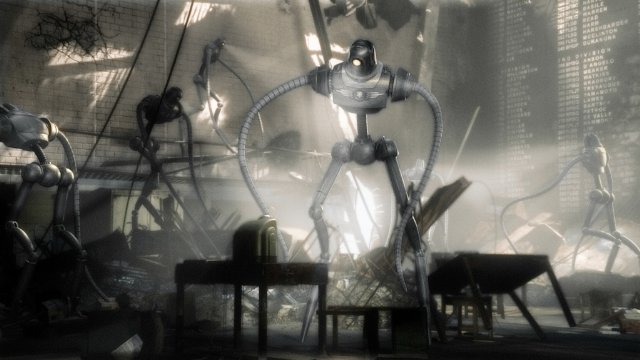 Look at them. Always fucking shit up.

Needless to say, our heroes get stuck on the rocket going up into outer space. Full of animals, angry robots, and dead scientists. Oh no!

So Joe figures, hey, he is a captain of the SKIES. He should save everyone and blow up the rocket alone on the ship. Well, Polly doesn’t listen. Again. They free all the animals and also fuck up the ship. Thankfully, there is just one escape pod left.

And do they reach it? Do they? 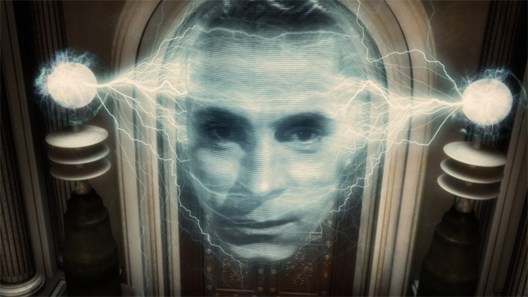 Not if Zordon’s son has anything to say about it.

Mannnnnn. I can’t believe this movie got so many great reviews.

SCatWoT was one of the first movies ever to use CGI like this. To give us an old timey, futuristic, retro feel. Everything was intentionally done with a specific style in mind. And that style could have not felt more boring to me.

Fuck. This movie dragged on. First of all, it was only rated PG. So the action was only PG levels of exciting. This probably a false complaint.

The real issue is they were going for this super old feel. Maybe specifically a 60s/70s sci-fi b-movie feel. But it was incredibly dull the entire time. I just wanted it to end. Paltrow was down right terrible in this movie. I don’t know if it was her or the director, but there was close to zero emotion the entire film.

Angelina Jolie is obviously barely in this movie, despite most of the advertisements featuring her and her eye patch. I really assumed she was the sky captain.

BUT IT WAS JUST SO SLOW. Which obviously is my main complaint. The entire movie just felt brown and grey, very unexciting colors. I was hoping with that much CGI it would be a bit flashier and exciting, especially on Blu-Ray. But no. Slow. Dreadfully boring. And fuck, this is one of the worst movies I have had to review for a milestone review.

Which is the issue here. I found it hard to be funny, because I had to type out the whole plot outline, and found it a struggle just to remember what in the fuck happened.

I dunno if anyone ever watched this movie. But re-watch it. If you liked it, let me know why. If you still like it and can ignore nostalgia, I just. Just help me out here.