Studies have shown that reviews that feature “Lake” in the title end up being better than expected when writing said review.

Of course, my only review before this was the movie Flakes, which was, I admit, better than I imagined it would be. It was quirky, off beat.

Shimmer Lake, it has plenty of quirky actors in it, but I am not sure how off beat it will end up being. I did go in with low expectations, despite the Lake theory, and as you can see, hey, it was better than I imagined. 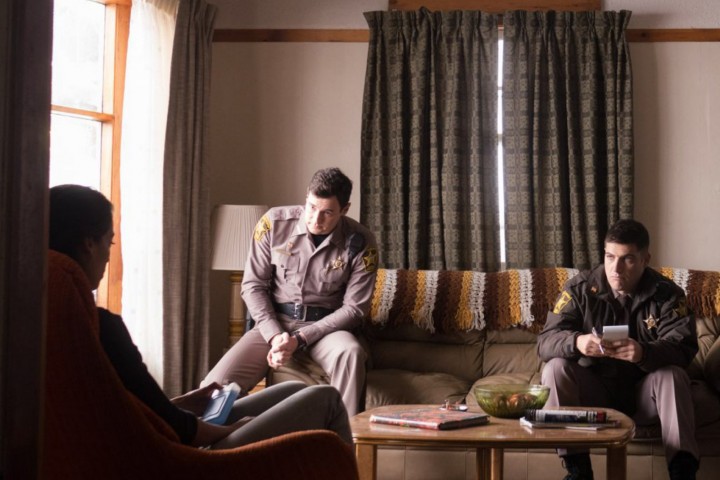 There was less sexual tension in this movie than I imagined as well. Look at that gap between police officers!

Shimmer Lake is also a story told in reverse. Similar to Memento, sure, but it is on a day by day basis. We start our story on Friday, and we see how the entirety of Friday plays out, then we see Thursday, all the way to Tuesday.

Because you see, on Tuesday, there was a bank robbery. And this is a small town, Shimmer Lake, so everybody knows everybody, and heck, a lot of them are related. Like or Sheriff Zeke (Benjamin Walker), whose brother, Andy (Rainn Wilson), a lawyer, just helped rob a bank on Tuesday. Andy worked with two other locals (Wyatt Russell, Mark Rendall) robbed a bank when it had a well known surplus, and Zeke was shot in the theft.

And now they are still about the town, Zeke is sure of it.

We just have to figure out how all the players are involved, which of course is revealed slowly while telling us backwards. We also have a judge (John Michael Higgins), a couple of FBI helpers (Rob Corddry, Ron Livingston), the deputy (Adam Pally), and the wife of a robber (Stephanie Sigman), and somehow one or more of them are involved.

And don’t worry, the lake is not the answer to the mystery.

Blueprints and alcohol are the best items to help with a bank robbery.

About three fourths of the way into this movie, I wondered why it was being told in reverse. It didn’t seem to be adding really anything extra to the story. It seemed to be Memento-ing because people liked Memento.

But of course by the end it all became a bit more clear. And yes, Shimmer Lake is a film that will be better the second go around. I don’t know if I will ever really watch it a second time, but I would like to see what clues give it all away and make this story tick.

It was a bit hard to label this movie, because there are a lot of actors who are mostly in comedy films filling out the roster, and I think that adds a strange aesthetic to the whole film. I am calling it a Dark Comedy in that regard, because it is normally comic actors acting serious, in events that are larger than life.

Shimmer Lake isn’t a film that is reinventing the wheel or adding something entirely new to the industry. But it does try to stand out and, as I implied earlier, ends up being a better ride than expected.