Get out of the way, motherfuckers. We got a GEOLOGY MOVIE to talk about. YEAHHH.

Sure, as a professional (in the case that I make fat stacks of cash), geo-scientists, I could use these movies to bemoan the lack of good science in film and to talk about everything that they got wrong. But in reality, Geologists don’t give a fuck and love the shitty geoscience movies. (Honestly, this could be true for most scientists, but I am not them so I don’t know). We haven’t had a decent CGI science fest in awhile though, mostly stuck with crappy intentionally bad movies which aren’t as fun.

BUT EARTHQUAKES ARE CLEARLY MUCH COOLER. So in San Andreas we should get shit breaking apart, people freaking out, presumably parts of California drifting off to sea. I can only hope. This is a geo-nightmare! One I am fully ready to embrace.

And if you came in here expecting a GTA movie, then get the fuck out of here right now.

We don’t have time for any more wise cracks.

In California, if your life is in danger, there is only one man you want to save your life. Ray (Dwayne Johnson) and his helicopter crew met and flew together in Afghanistan and now work for the LA Fire Department and rescue people everywhere all the time like the polished rocks they are.

But not everything is smooth in his life. No, cracks are forming in his personal life. His wife, Emma (Carla Gugino) wants a divorce. Their lives haven’t been the same since they lost a daughter in a drowning accident. At least they still have one more, their family bubble not completely eroded, in Blake (Alexandra Daddario). Emma is about to move in with Daniel (Ioan Gruffudd) who has a much more solid foundation. A famous architecht, rich.

But fuck all that. Earthquakes. The team at CalTech, lead by of course seismologist Dr. Lawrence (Paul Giamatti) and Dr. Kim Park (Will Yun Lee) have been testing out a hypothesis that will allow them to predict earthquakes. Thankfully in Nevada there has been a series of miniquakes to hopefully test their theory out and hey, it works! Just in time, or not just in time, because it looks like all of their recent work stress is about to be tested when the earth’s stress gets released. All along the San Anreas fault. Through small towns, close to LA and right smack dab through San Francisco .

Also featuring a few British folks from up the river. Namely, Hugo Johnstone-Burt as an engineer looking for a job, Art Parkinson his younger brother, and KYLIE MINOGUE as a small role that totally wouldn’t normally be noted but it is Kylie Minogue people. 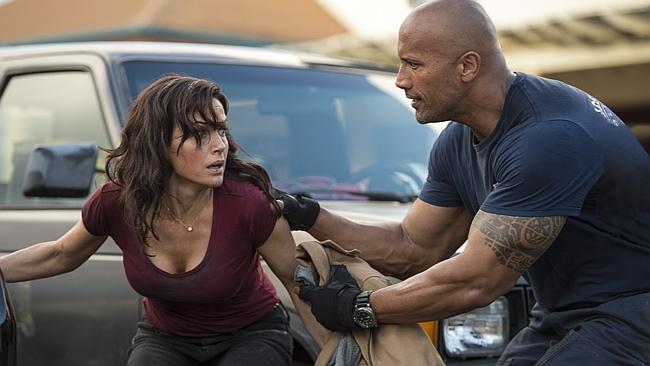 Hide! Kylie doesn’t like it when you call her roles small!

It has been awhile since there has been an earthquake movie released. The last two I can remember are Aftershock and Aftershock. And when I compare all three, I would put this a step below Aftershock, but one step above Aftershock.

That’s right. I liked a disaster movie. And I will only briefly talk about the science.

From my knowledge, the whole magnetic pulse to predict earthquakes thing is a solid hypothesis running around the community and relatively new. So that is fine. I think they made up a big fault that doesn’t exist as part of the main San Andreas fault having it go through Nevada, but honestly, I don’t know. But my biggest complaint science wise is the Tsunami. Part of the climax involves a tsunami post all the big earthquakes hitting the city. Buuuuuut, that seems silly. Do giant ass earthquakes cause giant ass Tsunamis? Sure! But not at the same place the earthquake hit. See, the giant displacement event would cause the water to shift away from the epicenter, not towards. A giant ass tsunami would totally head towards Asia/Australia, but it didn’t make sense for it to hit San Francisco.

Back to the earthquakes! I cried. I legit cried near the end of this movie. Because overall, this is a story about a man trying to save his family. A man who tries to save everyone but couldn’t save his daughter those years ago. A man who is a rock in real life, facing a force that literally breaks rocks.

I was surprised at the amount of action this movie provided. They went high with their Earhtquake and aftershock count and had the damage affect at least 3 cities separately, plus tsunami, so there was tons of near death (and death?!) scenarios. Shit, the body count on this movie is so incredibly high. Millions and millions of people die thanks to tall buildings falling over and streets ripping apart. It’d be a bloodbath if it was just rated R and we could show all the bodies in the flood.

There was also disappointment when douche looking Ioan Gruffudd ended up being exactly that, a douche. I was really hoping he would be a good guy, despite being the “new rich man” in their lives, and make it a bit more complicated of a love dynamic. But alas, if it looks like a douche…

San Andreas has everything I’d want in a disaster movie. Some extremely ridiculous scenes of survival. Some crazy deaths. Trillions of dollars of damage done to infrastructure. Ample cleavage because you have to have that in movies about geology for pun reasons. Not completely terrible CGI. Some actual factual science. Some extreme cringe worthy dialogue (including the most obvious ending dialogue to end the movie. Much cliche). And of course, last but not least, Paul Giamatti’s face representing my literal profession.

Buy it now from Amazon now on Blu-Ray or DVD.