Yes. Rubber. The movie about a killer a tire. But is it about something way more than that?

I think so, and maybe this review will surprise you? 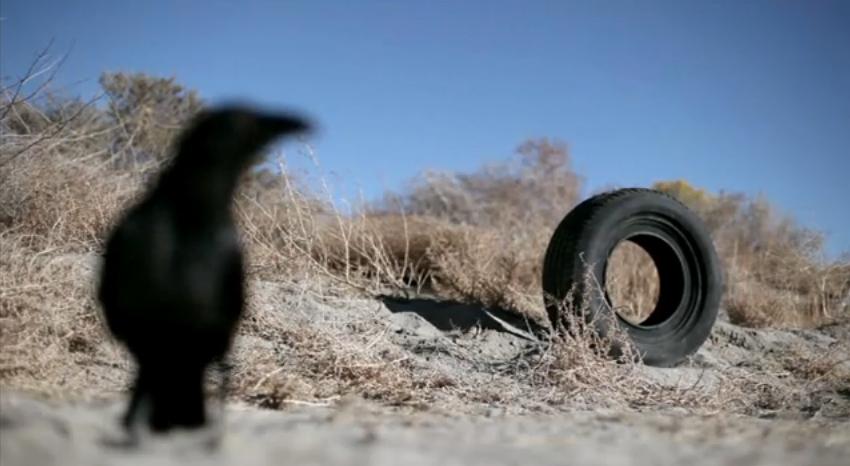 Don’t worry. The bird is about to explode, but it is a fake bird.

The beginning will scare away most people. A car is driving down a dirt road, hitting chairs. A cop (Stephen Spinella) gets out of the trunk, and has a nice monologue about “no reason“. Link is to that quote if you want to read it. He is addressing the audience in all of this, making it clear this movie is weird, and also a tribute to “no reason”.

Camera backs away, and hey look, a group of people he was talking about. Yes, just a group of people, standing in the desert. They are also told they are about to watch a movie, and then stand around with their binoculars, looking for the movie. Eventually a tire gets out of the ground, and rolls around on its own. He crushes some cans along the way, but one can he doesn’t. He just sits in front of it. And bam. It explodes.

A tire becoming both able to move and discovering psychic powers? Amazing! He rolls around a bunch more, and kills a rabbit, and a bird, and eventually finds himself on the road and discovering humans.

This film should sound completely nonsensical, because it is. The audience watching the movie is often shown talking about the events, and play an active role in the movie. The tire seems to fall in love with a girl, Roxane Mesquida, and checks into the hotel. At this point it has been two days and the audience is all starving and bored. Jack Plotnick, the “Accountant” finally gives them food, but it is poisoned.

The cop, now thinking the entire audience is dead tries to end the movie and tells all the other characters to go home. But there is one member left, a guy in a wheel chair, Wings Hauser. So reluctantly, the movie continues, despite the cop just wanting to go home. While also trying to kill off the lone watcher left, so that the movie will also end that way. 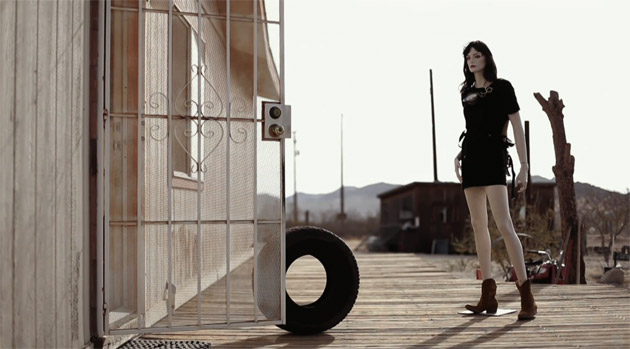 They even try to trick the tire with a decoy woman. Full of dynamite.

Are you confused yet? Of course you are. What the hell is this absurd/nonsensical sounding movie?

When I watched it, I felt like it was two stories in one. The obvious story about the tired with psychic powers, killing people. But I felt the story with the audience to be that much more important. Although you can assume the movie has no reason to it, given the (obviously sarcastic) monologue, and thus just a bunch of random events, or you can assume it means something greater.

I didn’t feel I was reaching too hard when I figure that the audience represents the damn audience. Most of them making comments that audience members probably are also thinking at home. By killing them off by 1, that is presumably just everyone giving up on the movie but one guy. If everyone gave up, the movie would be over because no need for an ending if no one watched it. (Tree in woods?) But because there is of course people like wheelchair guy, and me, it goes on, and the ending gets more bizarre and nonsensical.

I could go on. But I feel like the movie is a direct attack on the crap Hollywood has been producing, and getting rid of more creative ideas. The credits scenes are a clear indication of that. Kind of like a warning to Hollywood, that if they keep releasing all the same crap, B movies might take over?

There is so much more you can take away from this movie, but that might make me sound like a crazy person. Because it could also just be a “no reason” movie, and taking Scythian from it is not their intent. I can say that most people who watch this probably wont like it, or stop early.

I sound super snobbish just saying shit like that. I enjoyed it, and liked how different it was. Made me think, in very weird terms, which I loved as well. But hey, give it a chance? You probably won’t like it. But might!