Revenge of the Bridesmaids is another movie I thought I would ever watch. I noticed it before, but usually just in disdain. Mostly because it seemed to come out when Bridesmaids came to Theaters, to try and build off that Success. A live action example of Chop-Kick Panda, if you will. But damn it, someone requested a review, and a review there will be! 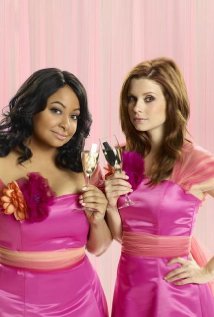 Raven and JoAnna Garcia are friends! They also have two other friends, Chyrssie Whitehead and Virginia Williams. The last one there is rich and wonderful. Lives in a mansion! All of the friends used to play as they went to school or something. She was spoiled though, because she was rich, so she might have been ruder. Raven and JoAnna left that town and moved to NYC to become a writer and an actress. But they come back, and surprise, spoiled brat is getting married!

They hate her now, and surely they would just decline and not go. But the groom? The groom is their other friends former long term lover! Whats up with that?! So they want to get to the bottom of it. Eventually they decide (like action movies?) they need to infiltrate the area, become bridesmaids, and try to ruin the wedding. For their real friend. Shenanigans!

So, while watching this movie I got suspicious. Something else was not right with it. The camera work was dreadful, reminded me of day time soap opera during parts of it. Clearly a rushed thing sure. But something else bugged me. Once I noticed there was weird transitions involving fading out and a new scene? I figured it out. This is a damn made for TV movie, ABC family or something. Arggggh! And it shows. I mean, made for TV movies don’t have to be bad. Lifetime and ABC Family just give them a bad name. Other networks had made decent ones, but this is not one.

I thought the acting was pretty bad, as was all of the “schemes”. Type of stuff that is only done in bad sitcoms, or, well yeah, made for tv movies. Damn it again.

The morals of the movie aren’t the best either. The guy in question seems like kind of a douche, and is a bad guy for the two girls to be chasing after. Similarly, the daughter wasn’t too bad. She was spoiled, and thus kind of bossy. The movie made it clear that it was probably thanks to her mom, played by Beth Broderick, that she is the way she is. But punished for her upbringing she is anyways. It then ended with a “happy ending” where somehow it worked out well for the not rich three girls. Oh joy. 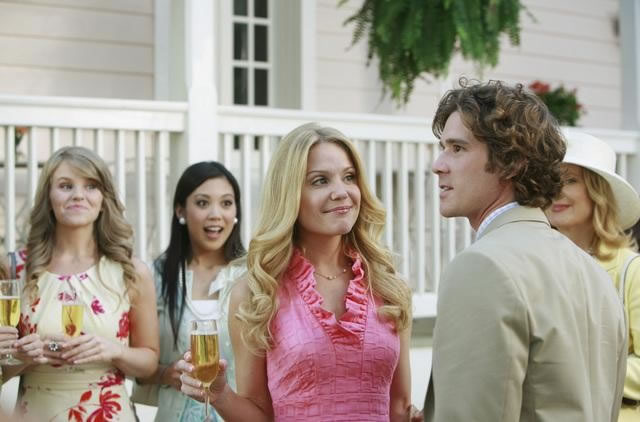 Unfortunately I wasn’t able to find this picture on Google by just searching “Douches”.
1 out of 4.
Tags:1 out of 4, Beth Broderick, Chryssie Whitehead, Comedy, JoAnna Garcia, Raven-Symone, Revenge Of The Bridesmaids, TV movie, Virginia Williams