Results, aka one of he many films I would have never known to exist if not for the Spirit Awards.

Except unlike a lot of Spirit Award films, I was actually a bit excited to watch this one. I knew the main members of the cast! Hooray for familiarity! New things scare me.

It was also filmed in Austin, Texas, which I learned. This boring intro brought to you by the vast expanse of Texas, nothingness.

This is basically the only picture that exists for this film.

Power 4 Life is your average small gym in a large city. They have a staff of energetic fitness people, teaching classes and being all personal and trainer-y. It is run by Trevor (Guy Pearce), who is Australian or New Zealander. He has big dreams of one day expanding the business and having a bigger studio.

His best physical trainer is Kat (Cobie Smulders), who always gets those results and is only a bitch to low-lifes who don’t pay. Because she needs more money and needs more clients. Also sometimes Kat and Trevor have sex.

Trevor is reluctant to give Kat a new client, a weird rich dude named Danny (Kevin Corrigan), because he is…well weird. He just throws his money away, going through some shit, so he wants to look better.

Sure enough, he gets weird about it all, and Kat doesn’t really help the case, but he falls in love with her. Strangely enough, this issue only takes us really early through the film. It goes a lot of places, but it is all tied to the strange relationship between Trevor and Kat.

Also Giovanni Ribisi is a lawyer in this movie. Woo lawyers. 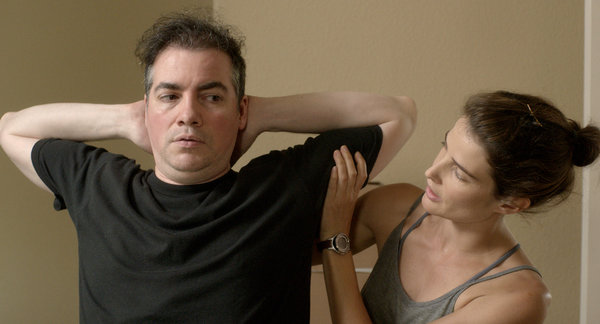 The first time anyone has ever written “Woo lawyers” I bet.

Results is like a true indie movie. Sure it has some stars, but it like three genres. Not a full comedy. Not a full drama. Not a full romance. And it is hard to describe without saying everything that happens.

Unfortunately, the movie goes at a slower pace than most people would expect. There are some great scenes that I love. A great dinner scene. Some twists. Some weird shit. But the time in between them is not to be desired.

The film isn’t even overly long. A respectable 1:45, but I can imagine it getting to the point that much quicker. If it was an easy film to watch, it wouldn’t be an indie I guess.

Pearce was good in this movie, although it could have just been me getting lost in his accent and enthusiasm. Smulders didn’t deliver on the emotional scale, she seemed to be pretty stoic outside of one scene. Corrigan has never looked worse, appearance wise, but I guess that was the point.

An okay romance, a shitty drama, and an okay comedy.