Wooo. Here is something I have been putting off for awhile. Repo! The Genetic Opera.

I like musicals. And well, this is still something different. But I figured I was going to watch Repo Men soon (maybe), so why not watch this also soon. I knew this wasn’t a normal movie, probably something made with the intention of being a “cult classic” right off the bat. But damn it, Giles is in it, so I had to watch it. 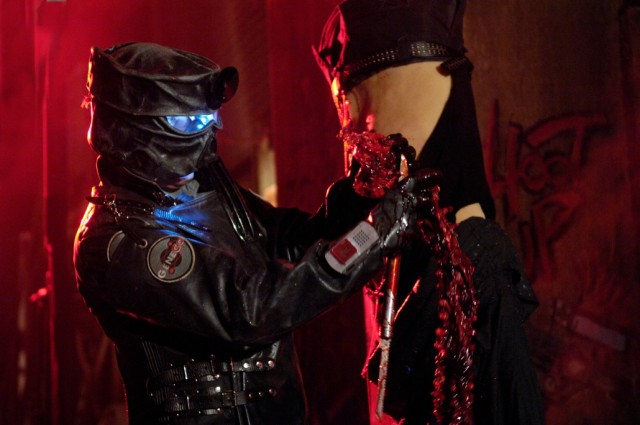 In this futuristic world (2050s) Organ Donation is now being treated like a car loan. Great offers, most people can get a heart when they need it, no money down. But they have to pay their bills. If they don’t keep up with payments? Well, their organs will get repossessed back.

Also lots of plastic surgery too.

Head of the company GeneCo. is Rotti Largo (Paul Sorvino) but he is dying soon. He has three children, Pavi (Nivek Ogre) who wears a different face on his face, Luigi (Bill Moseley) who has anger problems, and Amber (Paris Hilton) who is addicted to surgeries and the painkillers involved. Anyways, bad and evil family, and he doesn’t trust his kids. They do shady contracts with their organs too.

The Repo Man (Anthony Head) is forced into killing others and taking their organs for GeneCo, because he is being blackmailed by Rotti Largo. The killing and organ stealing is also legal. The Repo Man thinks he killed his wife before child birth, trying to cure a disease for her, but he was set up by GeneCo.

Because of all of this, and his shame, he has trapped his daughter in his house for her whole life, making her think she had the same disease and that she could die if she goes outside. Shilo (Alexa Vega) goes outside anyways, causing a lot of problems. Rotti Largo was only mad because he was dating her mom before she left him for the Repo Man. Operas are dramatic.

There is also Blind Meg (Sarah Brightman) who is no longer Blind, thanks to GeneCo! She is a singer, and thinks that she can retire and it just be okay. There is another character called The Gravedigger (Terrance Zdunich), who I felt was pretty much a narrator like character.

But yes. Main plt? Rotti Largo is still pissed, and wants to get more revenge before he dies. 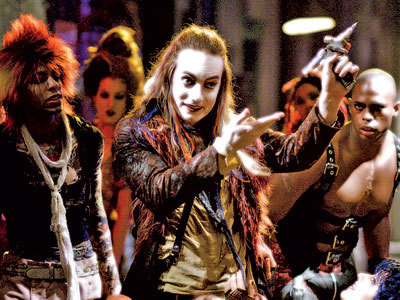 And the gravedigger is also a pill pusher.

So, this was definitely a weird movie.

As it is more of an opera than a musical, a lot more singing happens instead of just normal talking. Singing transitions between actual songs. None of the songs I can really even think of how to sing. Very…well, weird.

It is also not the finest display of singing talent. It had its moments, but a lot of it was just talk/singing.

This was another movie where I wasn’t sure what I thought about it after I watched it. Was it just okay while being super weird, or did the super weirdness make me like it a lot? Definitely didn’t hate it. I loved the little things they did to create their world, and the comic book back story telling of certain events.

It felt weird to be over “so soon” at the end though. Felt like a TV show worth of potential plot, and its obviously just a one shot movie. I also liked the ending, or at least what was left available for the viewer.

Ahhh, fuck it. Originality gives it the higher rating.