OoohhhhhhOooohhHhOOHHHHH. (That is ghost noises).

A retelling of the classic Red Riding Hood tale. For some reason the advertises of this movie made sure everyone knew that the people who did this movie also did Twilight. Clearly setting itself up for a not so serious movie.

The story stars Amanda Seyfried, who can be great and sing, but neither of these things really happen in this movie. She lives in a village where it always is winter and near a dark forest (I assume). They used to be attacked by a werewolf, but it stopped when she was a kid. She fell in love with a woodcutter, but he is lame and an orphan. FLASHFORWARD TO NOW. She is being forced to marry some other cute boy, who is prestigious or something.

I will say that I could not tell the two guys apart. This lead to some confusing moments for me.

He kills her older sister. Eventually they call in Gary Oldman to come and kill the wolf! Even though Saul from Battlestar Galactica (oh how he has fallen) thinks he killed it already.

Blah blah. Witchhunt in the village. People thinking its everyone else. Eventually it is revealed. It is dealt with. And then a different dumb ending.

Alright first of all, the entire village just seemed fake. Even if they were in the woods for real, everything just seemed like shitty CGI to me, even her damn hood. In terms of guessing who the wolf is, I had about two guesses. One was right. Hooray. But I didn’t care. I also found it ridiculous that after the reveal, the wolf was still killed (spoiler?). Like, don’t be a bitch Amanda.

ESPECIALLY if you compare that ending with what happened right after it. That makes it even more stupid.

I wasn’t even interested in the movie for that long. Gary Oldman’s character was even annoying. He mentioned like, four or five times that he had to kill his own wife because she would be a werewolf. That was about all he said. Where I come from, killing your wife isn’t celebrated or a reason to get to do what you want. 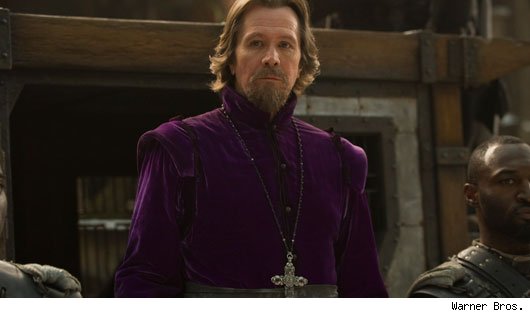 “Give me that sandwich sir. I killed my wife.”

But rawrrr. This movie wasn’t good. I haven’t given a 0 in awhile, because that means I am mad I wasted my time with the movie in addition to it being pretty bad. Oh well. This fits my bill.