Ruth Baden Ginsberg is not the first woman to serve on the U.S. Supreme Court. No, that was Sandra Day O’Connor, appointed by Ronald Reagan. But RBG, as the hip kids are calling her, has been one of the most influencial voices on that court, speaking for women and minority rights for decades.

Ginsberg has always been a tiny little lady, growing up in pre World War II America. She went to college at a time when girls were not expected to go to college. They were supposed to get married, have babies, and stay at home.

She was one of the first women in the Harvard Law school classes, and supported wonderfully by her husband, Albert, who was also in Law School and a year ahead of her. She faced many challenges along the way. Professors and deans thinking that women didn’t belong, even if they could handle the coursework. She even had to leave to switch to Colombia because her husband finished his degree and got a job in NYC.

And it turns out that just getting through law school, on its own a big challenge, while facing sexual discrimination, taking care of a kid, and dealing with cancer issues, wasn’t even the hardest parts of her life. 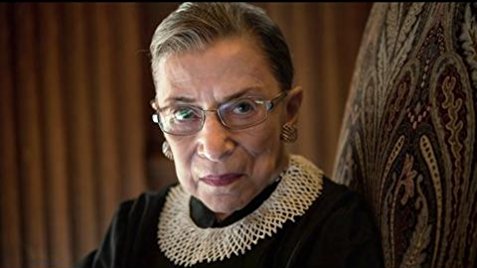 You see, getting a nice law degree doesn’t mean you get a nice law job. Firms didn’t want to hire her, because she was a woman, even with high recommendations from current workers and from her schools. They would say they just didn’t hire women and move on. Men’s only clubs.

She basically had to found her own organization, after getting various jobs through colleges and lectures, with other women, in order to get their voices out. Their goal was to get cases that dealt with sexual discrimination. Their goal was to help take over these cases from local areas and take them all the way to the Supreme Court.

You see, Ginsberg was a thinker. She knew first hand that women were second class citizens, and she needed a Supreme Court ruling or two in order to help ensure equal rights in the work place and other places for the women. And if that wasn’t good enough, she would go to them again, and again, and again.

And I guess if that wasn’t good enough, she’d just have to join the Supreme Court herself and do her best to make sure that someone was a voice of progressive reason and equal rights on that bench, damn it.

This documentary is full of footage, old and new, of Ginsberg kicking ass throughout her career. We even get to see a young Joe Biden leading her confirmation hearing in 1993 to the Supreme Court. We get to see new footage and interviews with the woman herself, her friends and coworkers growing up, and from her children and grand children. It is a wonderful view of the life and times of a great Supreme Court justice. It is full of stories and anecdotes that just give a complete look at her life (As of now) and feels so honest.

In fact, I want one of these type of documentaries for other Supreme Court justices. I am sure some of them are just as interesting as her. Maybe not, maybe some are just regular average people who did the right things and are a place holder. Hell if I know.

This is what the movie Marshall should have been like. Marshall was of course not a documentary, but really just told a story of one case that made a white guy equally important as Marshall, and didn’t go into his later life successes. We need a legit documentary on this scale of his triumphs and life, so people can get a better picture of him as well.

What we really need though, is tons of ladies to see this documentary and get inspired to wreck enough legal havoc to get this country truly free and equal on all levels.

4 out of 4.
Tags:4 out of 4, Biography, Documentary, Gloria Steinem, RBG, Ruth Bader Ginsburg