2017 was a great year for horror. It exceeded my generally low expectations for the genre. It exceeded in a way that is inverse to the way that animation was a disappointment.

So I was a bit suspect of finding another good horror film after all the rest. But Raw looked really good despite knowing very little about it. I knew it would make me uncomfortable, it would have gore, and has shit ton of blood.

Heck, I didn’t even know it was a French film until it started and I got blasted with subtitles. Adding the foreign element is what made me realize early on that maybe it could also be great, because I knew America must have reached its peak.

There hasn’t been this much blood in a film since Army of Darkness. Which is arguably British.

Justine (Garance Marillier) comes from a very uppity family who expect good things out of her. She just got accepted into veternarian school and is excited about making the world a better place for animals. Her older sister, Alexia (Ella Rumpf) has already been there for a year and will help her get situated. Oh, and her entire family is vegetarian, they have been her whole life, and that is obviously relevant to the plot.

Now in France, I am led to believe that getting into a specialized school like this one is sort of like getting into a fraternity in America. They have hazing for the new recruits and a rush week, but it isn’t really optional since it is just everyone in the school. They have to submit, or else. As part of the submission, they get dumped with animal blood before important photos and are also forced to eat raw rabbit kidneys as part of their initiation.

So Justine doesn’t want to do that, she has NEVER eaten meat, and she doesn’t want to start now. She tries to get her sister’s help, but the sister denies their vegetarian upbringing and eats a kidney, so Justine has to as well. This does not go well, as she immediately feels sick. Hell, she ends up getting some sort of food allergy symptoms as well from it. No good.

And yet, his opens up something in Justine. She starts to crave meat, but made a big deal about being a vegetarian as well. So her gay roommate (Rabah Nait Oufella) tries to help her sneak this new obsession without others noticing. But it isn’t enough. Justine is constantly hungry, constantly looking for more and more. And you know where this obsession is leading. 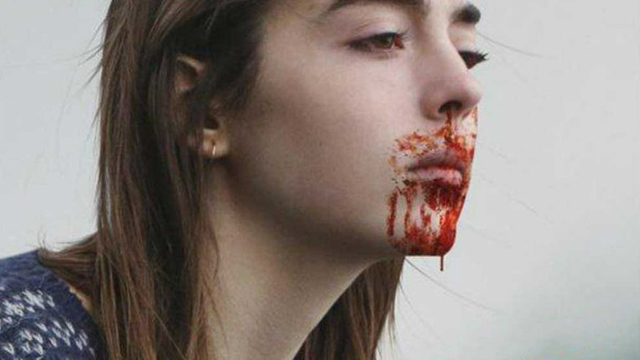 But seriously. I didn’t even know Raw was French when I went to see it. I have heard it hyped for a half a year and just assumed another indie horror film that gets rave reviews. It is good to see another country coming up strong with new ideas.

Raw has a some gross scenes and they just happen sometimes so unexpectedly it will take you by surprise. It doesn’t shy away from sexuality and hazing, normal college experiences, it just adds some extra human elements. Again, please understand I am referring to the eating of humans.

Raw is gross, it is creepy, it is well made, and yes, it is raw.