I think that was the reasoning behind this entire movie. It is a tagline that I don’t think anyone ended up using though. Come on guys, it was right in front of you.

Nick Cage has been in a lot of movies, always. He is the type of guy who never says no, going for the intense indie numbers like Joe, and for the straight to DVD shitty action movies like…well, a lot more of his recent stuff.

So why did I watch Rage? Well, I needed to watch a movie and wanted something about 90 minutes. One of the first random ones I saw on Netflix at all. Knew nothing about it outside of my fictional tag line, so I was ready to be surprised either way. 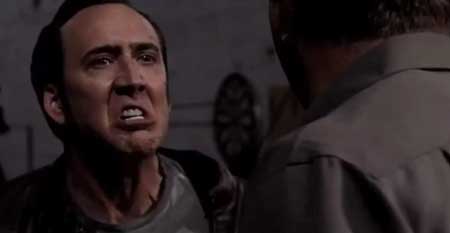 The good news is we still get some intense new CageFaces.

This story is about Paul Maguire (Cage), an honest business man who cares about an honest days of work. He earned an empire starting a construction business in Alabama and is pretty successful now. Good job! But of course he had mob help. He used to be in the mob with his buddies Danny (Michael McGrady) and Kane (Max Ryan). They got a lot of cash from the Russians, thanks to some thievery, and he used it to help finance his business a few years later.

Well, on a night out, a couple of thugs break into his house. His daughter Caitlin (Aubrey Peeples) is taken (not like the movie), and her two friends (Jack Falahee, Max Fowler) were beat up and left behind to tell the tale. Shit. Look’s like Paul’s past has caught up with him. Now he has to figure out if the Russians finally figured out what he did or not, before his daughter pays the price!

Just kidding, they later find his daughter dead. Too late. No, this is not a rescue mission like Taken. This is a revenge flick.

So Cage is mad, and he won’t let anything stop him from getting revenge. Not his wife (Rachel Nichols), not his former boss (Peter Stormare), not the Russian mob boss (Pasha D. Lychnikoff), and not even Danny “Getting Too Old For This Shit 27 years ago” Glover. 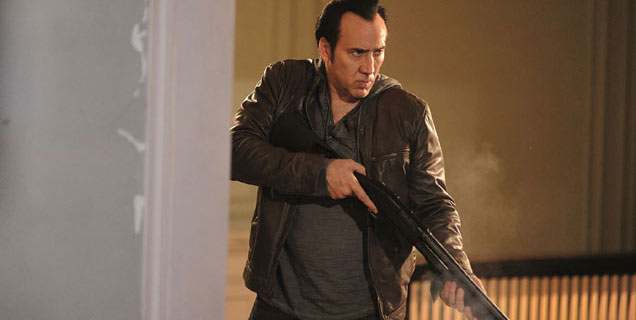 His face just looks like an angry plastic mask the entire film.

Ah, see. This isn’t just an action shoot em up revenge movie. There is a some drama/thriller stuff too. And twists and turns! And mob warfare.

And it is still incredibly boring. The plot twists I couldn’t see coming, mostly because they were pretty fucking stupid. Strong words, strong opinions. All true.

Man, was this movie stupid. I couldn’t believe how much of a waste of time this 90 minutes felt to me. It offered nothing new and had some shitty action. It also had some shitty backstory plots.

So why not a 0? Because of one dang scene. Cage was yelling at a friend and being all intense about things. I felt real emotion from Cage during this one scene and thought it would have taken a lot of takes to get that sort of intensity. That one scene saved this boring as fuck movie.