I had to watch this movie. I just did. Punisher: War Zone is the only movie since 1995 to be based off of a Marvel character that I haven’t seen yet.

I really didn’t know much about this movie. I just knew that they changed the main actor from the last Punisher movie, which I actually liked on its own. That and no one gave a damn about this sequel. Oh well, just have to see what happens. 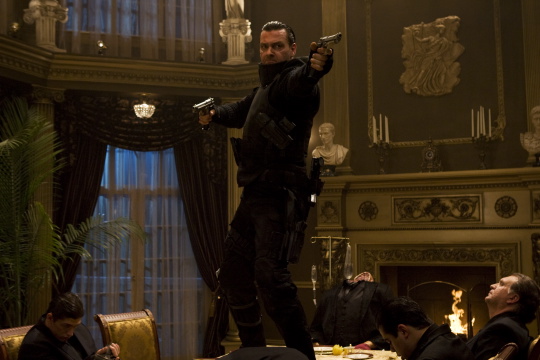 Hey look, he killed some people.

No more back story for The Punisher (Ray Stevenson), we all know his deal. His assistant is Microchip (Wayne Knight) and good at tech shit.

He takes out a bunch of mob people, but some escape! A detective, Martin Soap (Dash Mihok) lets him know where, a recycling plant! Shit happens, people die, and Billy (Dominic West) falls into a glass bottle shredder thing to presumable die. Well he doesn’t. His face gets fucked up, lots of stitches. Makes it look like a puzzle piece, so that means he is now Jigsaw and a villain.

During this stuff, the Punisher ends up killing an undercover agent, not that he knew there was one there or anything. Makes the cops pissed off at him, and the guys former partner Paul (Colin Salmon) is set to bring the Punisher in. Also, Jigsaw frees his brother, Loony Bin Jim (Doug Hutchinson), a deranged cannibal, to help stop the Punisher.

Punisher is upset, killing an innocent man of course. So he tries to make it up with the guys now widowed wife (Julie Benz) and daughter, and wants to retire. But cant, because Jigsaw will just mess with the family until he does something about it.

Then some revenge happens, terrorism, difficult choices, etc. And that is about it.

Jigsaw. Not to be confused with the villain in the Saw movies.

I have to admit, my expectations for the movie weren’t the highest going in to it, but the movie didn’t do much at all to try and convince me other wise. The plot was weak, and I didn’t care for any of the acting. Any of it!

And this is Ray Stevenson! Kicked all sorts of ass in Kill The Irishman. Did nothing for me at all.

It felt like the movie took me 2.5 hours to watch (and is around 100 minutes only) in terms of holding my interest. Just a film that only had violence and that is all. Is that all there is to the Punisher? I hope not.