Honestly, when I first saw the trailer for Prisoners, I wasn’t really impressed. It didn’t look like it was going to offer anything new. Sure, a torture scene. But despite the high star count, it just looked like it would be a lot of people yelling at each other, and then eventually somehow a crime gets solved.

Yeah. I was wrong. It is wonderful and unique. Fuck trailers, seriously. 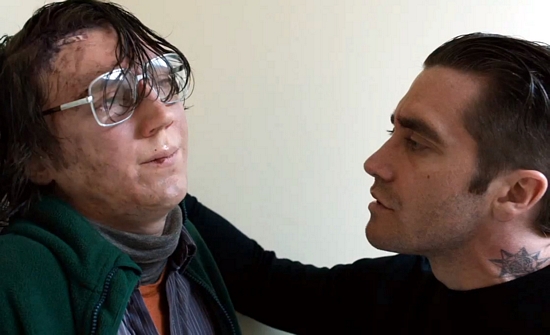 He probably deserves everything that happens to him. He wears GLASSES, the nerd.

Ah, Thanksgiving. A time for eating food and watching the Lions lose a football game. A whole week of buying electronics cheaply on Amazon.

Well, the Dover family (Hugh Jackman, Maria Bello) and their two kids have decided to eat at their neighbors house down the street. The Birches (Terrence Howard, Viola Davis) also have two kids, of similar ages to the other kids.

Well, due to some confusion, the two youngest daughters are able to go back to the Dover home on their own…and then not seen again hours later. Shit. Fuck. Missing kids. That is never good. In fact, they think the kids were abducted. They were seen playing around an RV earlier, and the brother is pretty sure someone was inside. But when they find the RV later, the driver is Alex (Paul Dano), an IQ of a ten year old with no physical evidence of the kids in his vehicle.

Well, Detective Loki (Jake Gyllenhaal) is on the case, and he has never left a case unsolved. He just doesn’t have a lot to work with, with Alex being clean, and his mother (Melissa Leo) explaining his circumstances. No, there is a lot more at work than what we know. It just takes piecing a lot of different puzzle pieces together.

But time is of the essence, and when your daughter’s life is at stake, what would you be willing to do to save her? 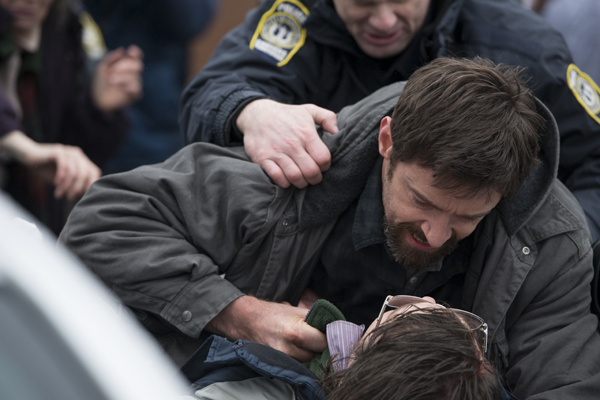 “Hey you should just show pictures of people being rough with Paul Dano.” Okay!

Well, here is something I realized. Unfortunately, it is only for the male stars. I really love these guys. For three of the four male stars, their last movie on my website was given a 4/4. The only one who doesn’t match this criteria is Hugh Jackman, because I had to sit through The Wolverine and Movie 43, but he still had Les Miserables right before that. My last movie for Jake was End of Watch, for Howard it was The Butler and Dead Man Down, and Paul Dano it was Ruby Sparks.

Looks like these men get another highly rated movie to their resumes. No offense to the ladies, but they have been in a lot more crap recently. Oh well.

So yeah, this movie was incredible. I thought it would be a joke from the trailer, honestly. It looked overly melodramatic. When I found out it was 2.5 hours long, I groaned. How could they fill it with 2.5 hours of content?

Apparently it was really easy, because the time flew by and I was captivated the entire time. They don’t waste time either. The girls get kidnapped within the first ten minutes of the film. The torture scene alluded to in the trailer happens within the first hour as well. Yet somehow, there is more to it than those few events.

The director does NOT hold your hand throughout the film. There are some plot lines you have to figure out on your own, through flashes of story and connecting the dots. It is a great film to go with others just to make sure you can figure out all of the looser ends. The ending itself is a bit controversial. I will admit initially I was kind of pissed off, but it has grown on me, and now I like it a lot.

The acting is fantastic in this film. Hugh Jackman and Jake Gyllenhaal carry it on their backs with exceptional performances, but even though Terrence Howard had a smaller role, he worked it well. One scene in particular, the fists and hammer torture scene just was so powerful, it will stay with you for some time. Howard was in the background of that scene, but his face says it all. Paul Dano also was pretty great in a role where he wasn’t given a lot to work with dialogue wise.

The women were for sure underused, so I am just not sure if the writer knew what to do with them. Viola Davis had one pretty intense scene, but then wasn’t really talked about much. Maria Bello’s character was pathetic and on drugs, so she wasn’t given much to work with either.

Oh well. Go see Prisoners. Probably the best movie to come out this month for sure.