First off, no, I still haven’t seen Primer. Stop asking me. I will get to it eventually. My mind is ready for a mind fucking this early in 2015.

Time travel. A fun subject and one that is ridiculously hard to get right. Again, I am not saying I understand time travel and know how it should be. No. I just hate seeing a time travel movie that features it, then has inconsistencies within its own version of time travel, making it a bit confusing. The last movie to do that was Project Almanac. So close.

So, fingers crossed. Because now I am going to tackle Predestination, which hit theaters earlier this year. I didn’t hear a lot about it when it came out, but recently it has been gathering steam. And I really want to see a good time travel movie that isn’t Primer. So, extreme fingers crossed.

What’s this? A woman? In a movie about time travel! How surprisingly rare! But they only showed us Ethan!

Here’s the issue. The Fizzle Bomber. That dude is the issue. He is an American terrorist living in the United States. He is hard to catch. He makes bombs. He blows the bombs up. People get hurt and he has been hard to catch.

In fact, he blew up maybe ten blocks in NYC. Yeah.

So we should stop him, before he blows up NYC. With time travel! And thus, the Temporal Bureau is born! These Temporal Agents travel through time, in a limited range, to prevent major disasters and make our timelines a better place. There are many issues and problems of course. Things might change a little bit.

They have been slowly getting closer and closer to the Fizzle Bomber too. Each time jump they get closer to finding his identity and hopefully stopping NYC from getting wrecked. This should be the final time jump they need for their best agent (Ethan Hawke), disguised as a barkeep. But first, everything has to be perfect… 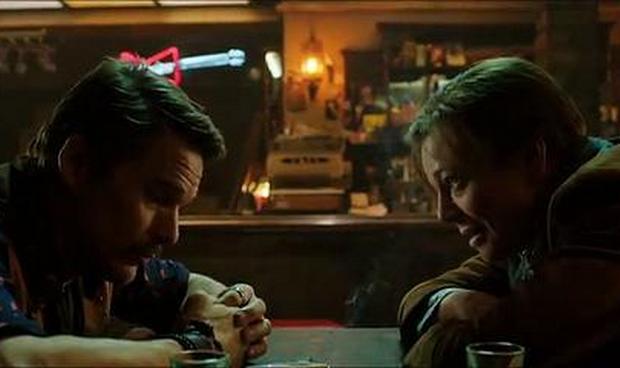 The second time traveling movie I have seen to mostly take place in a bar. Coincidence? Or alcohol?

Looking at my astrological charts, we are due for a great Ethan Hawke movie again, and, yes, this indeed gets to be the one! Hooray! Don’t let Sarah Snook confuse you either. She was in the not so great Jessabelle recently, and is much much better in this movie.

By nature of it being a mystery and a bit of a thriller, Predestination obviously has some twists and turns. Some you can see a mile away, some that blew my mind. I loved it. And I loved even more than this wasn’t an action cop movie. It was a straight up Sci-Fi Drama with some mystery aspects about time travel. Excellent.

And from what I can tell, it covered up all of the loose ends. Literally everything. It was super careful about what it said and did in every scene, and the level of attention that went into it is impressive.

On another note, Hawke wasn’t that great in it. Not bad, not great, just decent or expected. He was the lead though and his character didn’t have to do a lot to excel. Snook is the one with all the acting and development and she does a fantastic job.

And well, its a movie that is a mystery. Stop asking for more details and just watch the dang thing.