Alright, let’s pretend for an instant that I can give this movie any fair chance. You know it, I know it, I really can’t. I gave the Planes the most zero of zeroes I could give it. It was a strange review, in which I just went over all the scummy ways this movie was released, turned from straight to DVD bullshit to a cash cow thanks to advertisements.

But I digress. After I saw the movie, I realized it was still a 0 and deserved my scorn.

Now we have the sequel. Planes: Fire & Rescue. This should have less bullshit qualities, technically. The third film hasn’t been officially announced, but let’s assume next year too since they can churn these out pretty quickly.

Unfortunately, no other animated movies appear to be coming out soon, so this one will make decent box office as well. Hell, two weeks before it came out it probably already broke even with toys alone. 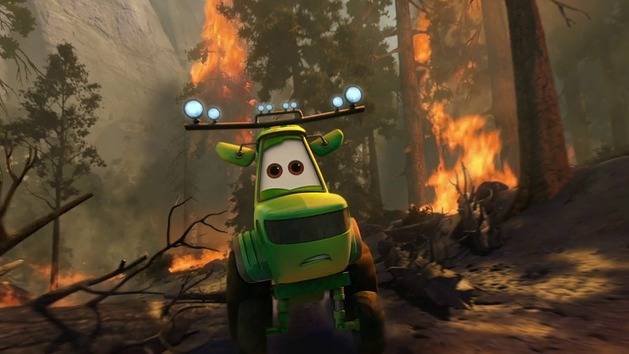 The sequel with mostly new characters instead of the old ones for obvious reasons.

Set sometime after the events of the first POS, Dusty Crophopper (Dane Cook) is now a big star. He is winning more races, people like him, and everything is going well. But during a routine manuver, something goes wrong! His gearbox is worn down, and he has to keep the vague torque dial below the red zone or else his engine will stop and he will die. [Note. I think they said his torque could go up to 140, but the dial showed 65. The “doctor” said 80% was his max, which was definitely not “112 Torque”.]

What does that mean? That means Dusty can’t race. His dreams that he spent forever getting in the last movie, literally changing out almost every plane part (including a gear box I bet), to do it, are now ruined. So he sulks off like a little bitch, and a fire happens due to his shitty gear box. This is almost a disaster, but it is solved. Too bad the fire inspector deems the fire truck as inept and old, so they shut down their run way. This is bad news when their corn fest (?) is in one week and expecting a big turn out thanks to Dusty.

So Dusty does what he has to do, I guess. He goes to get certified as a fire fighter. This causes him to go to totally not Yellowstone park, to train under Blade Ranger (Ed Harris) and his crew. A girl plane Lil’ Dipper (Julie Bowen), who as the only real female character in the movie is a stalker to Dusty, an older helicopter Windlifter (Wes Studi), who is an incredibly racist caricature of a Naive American, and a bunch of tiny Honka looking bulldozers meant to sell toys.

Anyways, days of training and other bullshit happen. The “plot” comes from the fact that some luxury car (John Michael Higgins) opened up a new lodge in the area and is a dick. Nothing he does makes a lot of sense, but he is our cheap villain/not a villain character. After several days of bullshit training, like a week, CAN DUSTY SAVE THE DAY WHEN FIRE HAPPENS?

I think that is the four ways I’d break down this analysis.

“But it’s just a kids movie!” I don’t know how much I have talked about that before, but that is one of the dummbest things anyone can say. Saying it is just a kids movie, or just a summer flick, is literally like being that kid on the playground who said his made up fighter character had a magical invisible cape that would reflect spells last minute. Bitch, everyone knows that is lie, and does not protect you. Just like a movie being geared towards kids. How can we even say that anymore when we have had dozens of nice “kids” movies that everyone can enjoy and get things out of over the last decade? It literally should have killed that excuse, yet somehow it goes on.

It is the reason we get low budget, cheap CGI, rushed crap, just to sell toys. If you forgot, Planes was last minute pulled from straight-to-DVD status and given a new guy to do the main voice and that was it. This was being made before that even happened. Cheap. Shit. Saying just a kids movies just lets them keep producing this filth.

This movie only creates more problems with the world building of this cars/planes universe crap that they are building. We already knew it was Earth. Sure. This is definitely set in America, with references to California and other states. It is very awkward. They, however, amplified the cars aspect of it all with all the animals being cars as well. In particular, John Deere equipment roamed the forests. What? The fuck?

But that isn’t it. I have talked before how it is all odd that 1) clearly they are made entities and cannot breed out more cars/planes, or 2) are made by other preexisting cars/planes in a factory or something. But the faulty gear box amps it up. The driving factor of the plot. Why not replace it like everything else? Because of course, that gear box is out of production and there is literally nothing they can do. The mechanics can’t fix it because it is complicated and needs factory precision.

So in their world, they have cars/planes making cars/planes parts somehow, and they can stop them knowing full well they are potentially killing hundreds/thousands who rely on that part? That is pretty damn fucked up.

Why do they even need a few people to put out forest fires? I can’t imagine forests having a huge need in a planet without humans. They should just let the mother burn.

Re: rushed project/CGI. There were many fire scenes. All of them were terribly ugly.

In terms of continuity, it is the simple basics they just didn’t care about. Early on we find out that the corn festival is in one week. He then spends almost a whole week in the fire training camp. Then? Then after events, he is knocked out for five days. After that? Yay time for the corn festival. How many fucking days are in a week again?

These minor things add up, showing that the people who wrote it were just pulling shit out of a hat and animating it. Coherence is for suckers. Didn’t Dusty have a girlfriend? She wasn’t in this movie at all.

Bullshit. So much bullshit. The film starts off saying it is dedicating the movie to all the firefighters out there. Aka the people who aren’t in the movie at all, and instead all of the emphasis is placed on their equipment not the men who drive the vehicles. At one point, Dusty worries about going into a cave because they might suffocate. Shit, planes need oxygen now?

The characters are all stereotypes. Including the terrible Windlifter. The plot is taken from 80s action movies without any of the fear. The only issue is his gear box, of which he keeps a secret despite it clearly affecting him quite often. Once it does get brought up, he is told to just get over it. Then he gets over it. Moral? You might have a failing heart, but fuck it, just ignore it.

I watched this movie in a packed theater. The only times the audience laughed in a big unit was during the two fart jokes. Everything else? A few giggles, but mostly silence.

Just think. A third movie is definitely happening. Maybe in the third one, Dusty will get bored of racing and decide he wants to be a frog next?