A lot of hopefuls out there were hoping that Passengers would be our next great Sci-Fi film. There seems to be one every year. Last year we had The Martian, year before that was Interstellar, and before that was Gravity. We’ve consistantly had one amazing one a year that blew the rest behind.

Passengers was certainly the most advertised coming out this year, including a sweet near Christmas release. But it was too slow.

Not only did we have Arrival already this year, which clearly took the title, but we also had Midnight Special, which I think needs to be on its own pedestal as well. That’s right. Two groundbreaking, well done, science fiction films this year. And neither one of them is named Passengers. “But we are the only one to actually be set in space! Come on, space suits!”

There is a big ship out there, named Avalon, and it is going to Homestead II. And Earth like planet that they are going to start building colonies on, because Earth is super damn crowded. The trip takes 120 years, so everyone aboard the ship is in a hibernation sleep. Five months before they get there, the crew will wake up, and four months before they get there, the 5,000 passengers will wake up. There they can start to mingle, party, hang out, start thinking of ideas, before they land. Good times.

Until it goes through an asteroid field 30 years into the trip, hitting a few big things. And one of the pods stops working, waking up the passenger inside. Jim Preston (Chris Pratt), engineer/mechanic guy, finds himself alone on a giant space station. He has computers to talk to, and a robot bartender named Arthur (Michael Sheen), but that is it. He cannot go back to sleep in the pod, and there is still 90 years left on the voyage. That’s right. He will die on that ship, old and alone, with no one to help hi.

Jim lasts a whole year almost before thinking about killing himself. But then he sees a girl in a pod, Aurora Lane (Jennifer Lawrence). He falls in love with her, learns everything about her in her profile, and she gives him a reason to go on with his life. And then he does something else. He wakes her up. Sure, he basically condemns her to die also on this ship, but now he has a buddy who will hopefully love him back! Hooray!

Also, problems on the ship still keep happening, Laurence Fisburne is eventually in it, and action, adventure, explosions. 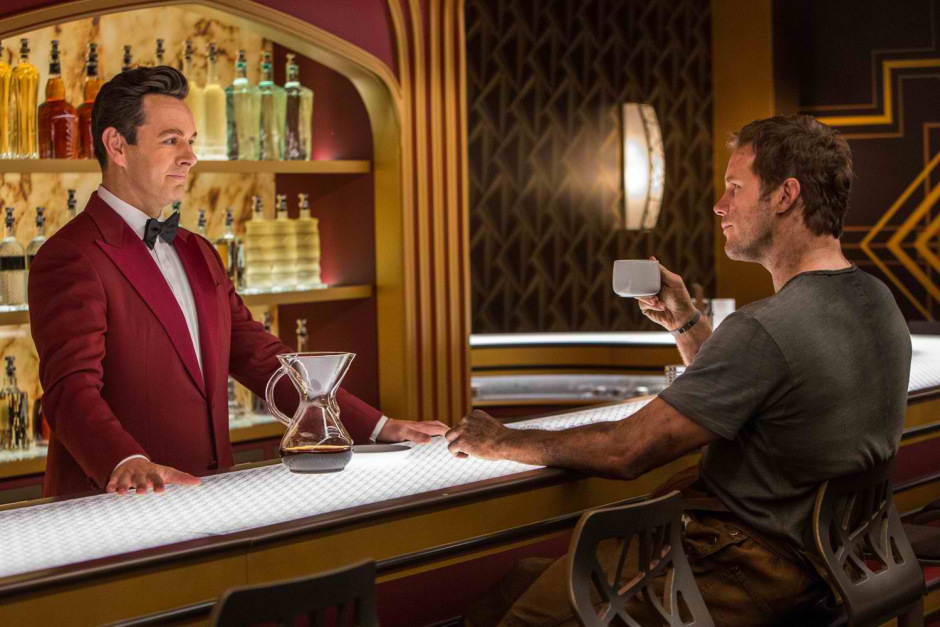 The finest drink in the entire galaxy.

I think inside of Passengers is an extremely solid film. It could have been a more serious drama, really deal with the ethics of his decision and how it will affect them for the rest of their lives. But Passengers didn’t want to keep it really serious. It wanted to be more romantic and more…action-y.

And the last act really does kill it. If it had none of the explosions, the deftly engineering skills, the potential of self sacrifice, the crying and screaming, it could have been a better film. It instead went a more Summer Blockbuster route and gave us a weaker story. The problem with the more action scenes is that they seemingly came out of nowhere. Oh yes, there were hints, but it jumped from a 2 or 3 to an 11 out of nowhere, just because the plot demanded it. The build up was bizarre, especially because the cause was something that started over two years ago.

You know what though? That still didn’t kill it for me. The ending after all of the action could have still had some really beautiful moments. They even hinted at it. (POTENTIAL SPOILERS). But instead of seeing any of these great growing old scenes, we are instead just transported to when the crew wakes up five months before landing, to see all the changes done to the ship, with a Lawrence voice over explaining it to them. And it just falls so flat.

So the rating here is partially for potential. Pratt and Lawrence aren’t bad, they aren’t just given enough to really work with. There are times when the emotions run real (After the reveal of what Pratt did), but they don’t fully go where they should to make it a very emotionally investing film.

Passengers could have been a crazy third amazing Sci-Fi film of the year, but instead, it just wanted that blockbuster money.