I readily admit that I am a coward, but I also claim that I am willing to watch anything. This often leads me to situations where I scare myself for the entertainment of others. Like Paranormal Activity 4! I never really wanted to see these movies, but last Monday I marathoned the first 3 just to catch up, and strangely enough did not find them scary. I attribute that fact to my multitasking nature, and that I may have missed a lot more of the subtle scares in the build up.

In order to get the full experience, I realized I needed to see the movie with other people. A nice midnight release. Once I got there, I also picked my seat so that I would have groups of women on all sides. I figured hey, if women scream more at movies, I might scream too! If I increase my own fear, I can probably talk about the movie a bit better. 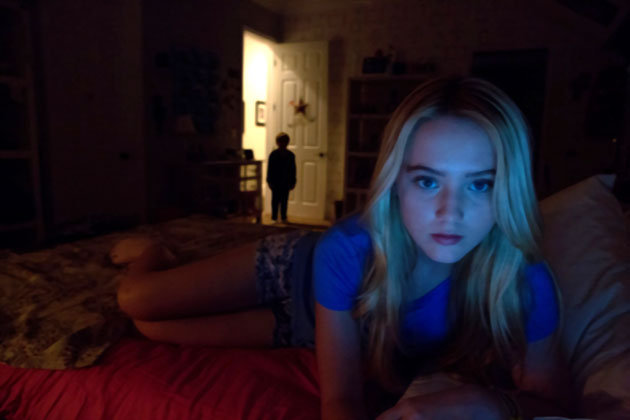 Paranormal Activity 4 takes place about five years after the events of PA1/PA2. Katie had stolen her sister’s kid, Hunter, killing everyone in her path, and disappeared never to be seen again! But now, we are in Nevada, with a completely new family.

Alex (Kathryn Newton) is your typical teenage girl, but lives kind of in a big wealthy house. Mac notebooks everywhere! She actually has married parents (Stephen Dunham, Alexondra Lee), but they fight a lot and might get divorced. You know, if they survive. She also has a younger brother, Wyatt (Aiden Lovekamp) who is pretty normal.

You know who isn’t normal? That kid across the street, “Robbie” (Brady Allen), who lives pretty much alone because his mom Katie (Katie Featherston) is away a lot. But when she gets injured in an accident, the family agrees to watch over “Robbie” for a few days while she is in the hospital. Just like every other movie in the series, weird stuff starts to happen in their house as soon as “Robbie” is staying over. Alex’s good friend Ben (Matt Shively) notices that “Robbie” is being weird while they Skype, so they agree to set up mac book pros around the house to record their activity and make sure he is on the up and up.

Definitely not a ploy by Ben to have access to Alex any time of the day. Perverted teenagers are not a thing.

Hopefully “Robbie” doesn’t befriend Wyatt too much. It would be weird if there was two scary young boys running around. 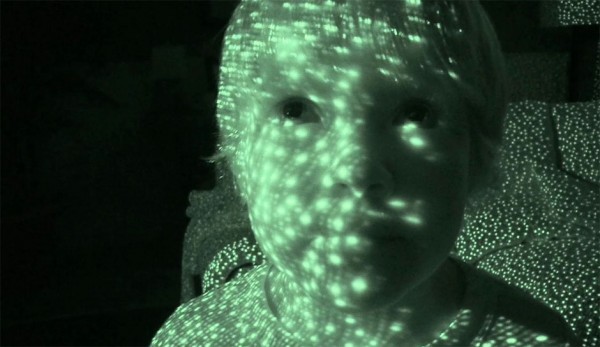 Paranormal Activity 4 turned out to be a pretty different beast than the previous three films. The technology used is ramped up, the replace a lot of the subtle scares with more noise based rumbles and shadowy figures, and the main character is a teenage girl instead of the adults. Some would say that replacing a lot of the subtle scares is almost a dumbing down of the film series, no longer rewarding the observant viewer, and yeah, I would agree with it.

But I am more upset that the main character, who has all this physical proof on her computer, has a great inability to show her parents and get some sort of solution in the works. Most notably would be the “car/garage” scene. It is almost as if they decided after setting up all the computers to never actually check them again for evidence, which is bonkers.

I also have a problem with this movie in that it doesn’t really answer any questions into the mythos of this world. The plot involving Wyatt and Robbie doesn’t actually make any sense, nor do the actions of Katie. Instead, we are left with another tragic ending, but practically no plot development, which to me only feels like a waste of time.