I can’t say I ever saw the first Never Back Down movie, but I bet it sucked. I am not even sure if there is any related characters in this movie to the first. The sequel is actually directed by Michael Jai White, who is badass, and plays a great MMA fighter who has had cop trouble so instead sticks to training individuals in a secret dojo. Through different means, we have four main fighters who end up coming to train under White in order to compete in a large underground tournament, The Beatdown. 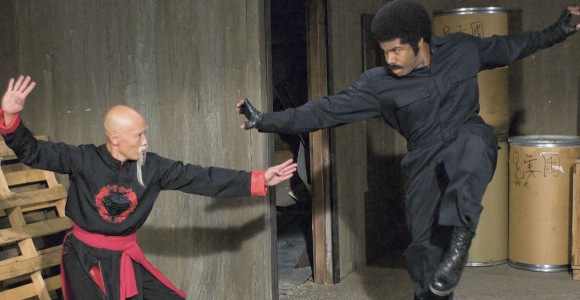 I bet Black Dynamite could win that tournament without even touching the ground.

Winner gets 10k, just needs 16 different fighters doing MMA. Some of these people in this movie are actual MMA fighters, I just couldn’t tell you who. Probably that big ass dude. Spoiler? The four people who train under MJW get to be the final four. One of the four ended up being a crazy asshat though, who also tries to get the cops to “break down” Michael Jai White. So the other 3 have to make sure he doesn’t win, but without being all, Karate Kid low kicking cheap. That is about it. Everyone has different reasons for fighting, but you can kinda guess who will win and what will happen. Acting isn’t the best, but I can at least say the film entertained me.

The ending is of course the tournament, which has the largest concentration of fights in it, but don’t worry, there are earlier fights as well. This movie also features a montage. This is supposed to be MJW’s first attempt at direction, which would would explain why everything his character does is just the most badass thing a person can do. Similarly, he may have just based it off of his own life.

This is not the montage in the movie. In case you didn’t know…

Tags:2 out of 4, Action, Michael Jai White, Never Back Down 2: The Beatdown