Over four years ago, I reviewed a film on a whim. I had to drive almost an hour to get to the theater (which meant something pre-Houston days), for the only screen time it was showing. Something like 12:30 pm on a Saturday. A very limited release, I guess you could say.

That movie was My Little Pony: Equestria Girls. It was my first foray into the subject. Oh, I heard about it before on the internet, and heard about bronies, but I never thought about watching the show before. I just went to see the movie because, damn it, I watch everything, so why not that as well? I went in blind. I didn’t have any background on the show.

Now sure, after it I watched a few episodes and thought it was okay. Nothing I would binge watch, but something I could watch occasionally. And now, years later, I have seen tons of episodes over seasons. I understand the characters now. I have made art with the characters. But I am still not up to some obsessed level with the show, because I haven’t seen most of it. Just parts of episodes here and there. The kids have seen a lot more than me.

But I feel qualified (As fuck!) to review My Little Pony: The Movie. New art style, same ponies, music, and fun. I was excited for this. I took my whole family to this. My youngest daughter, who is two? This is now her first movie ever seen in a movie theater.

I was excited and ready to go. 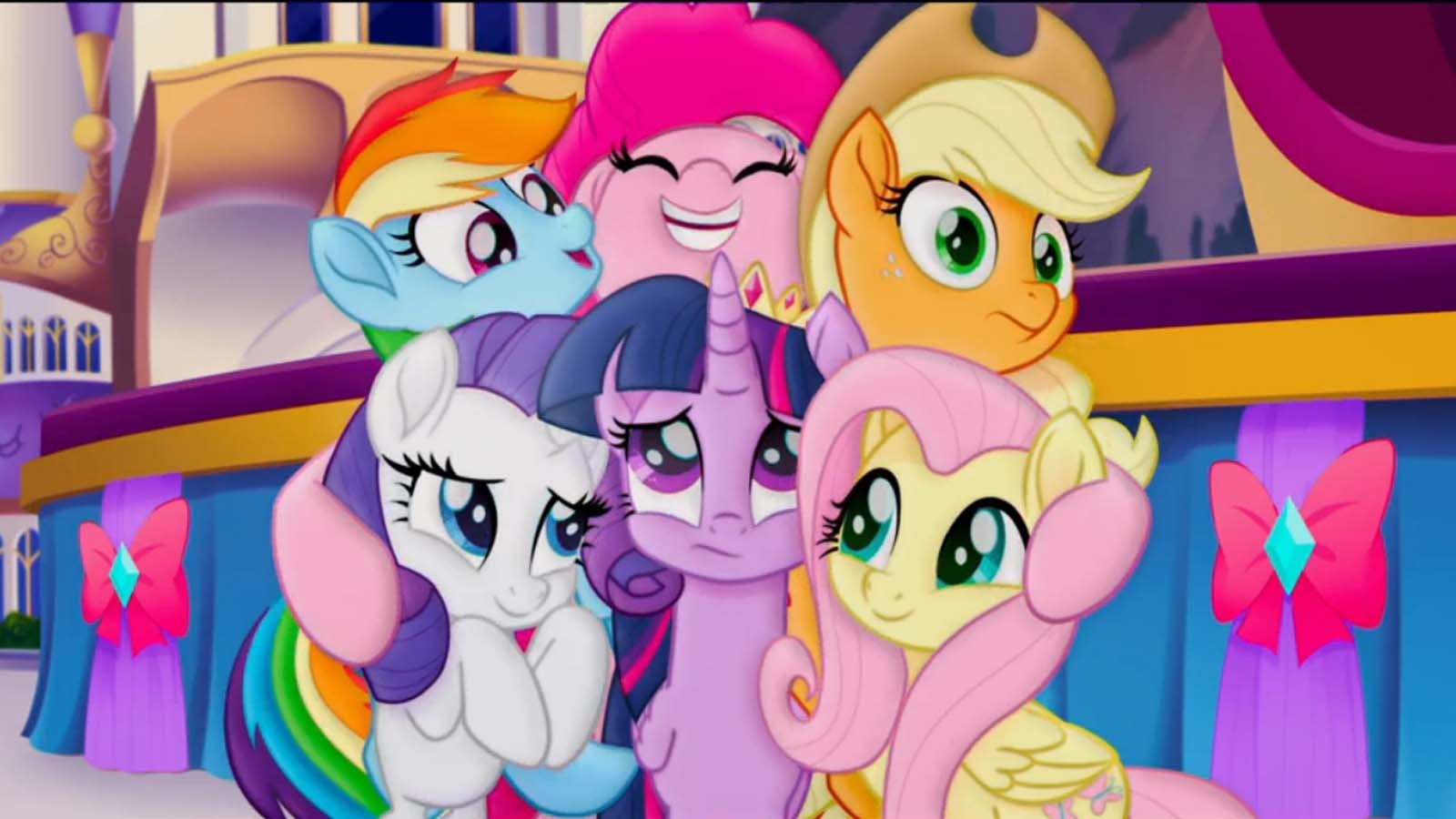 I just really wanted to find out if Friendship was still magic.

The story starts us off with Twilight Sparkle (Tara Strong) and Spike (Cathy Weseluck), properly freaking out because there is about to be a Friendship Festival, with all the kingdoms and princess and even goddamn derpy all excited. They need to highlight friendship, so that everyone can be so fucking magical. For whatever reason, the highlight of the festival is a pony, Songbird Serenade (Sia) singing. She feels stressed, but it is okay, because she has her FRIENDS to help her. They got this. Rarity (Tabitha St. German), Applejack, Rainbow Dash (Ashleigh Ball), Fluttershy and Pinkie Pie (Andrea Libman).

Well, turns out friendship can’t do everything, all the time, right away. Because a few storm clouds start to gather, even though Twilight asked for good weather. Maybe she didn’t friend enough of the people?! Inside the storm clouds are some sweet airships, apparently led by Commander Tempest Shadow (Emily Blunt)! With a name like that, of course she is fucking evil. She is a unicorn, with a broken horn. The saddest. With a head minion Grubber (Michael Pena), they work for The Storm King (Liev Shreiber), and Tempest goes and freezes 3 of the princesses! I don’t even have to tell you which one is able to escape.

The last words they heard were to find the Queen of the Hippos. Huh. Okay. Well, if that is the way to save everyone, then that is what they will do. And on the way, they will find a singing cat (Taye Diggs), some bird sky pirates led (Zoe Saldana), some water horse thing (Kristin Chenoweth) and her mom (Uzo Aduba). 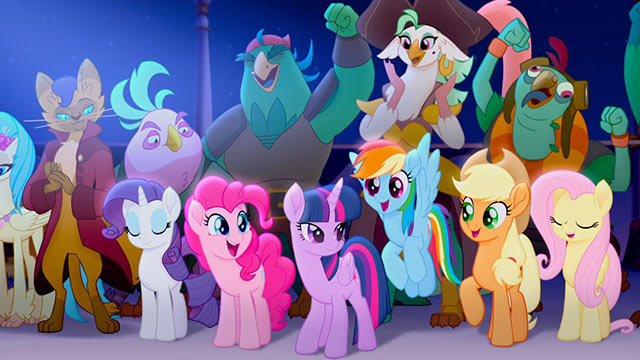 Guys. I think friendship is back on the table.

Like the subtitle suggests, this certainly is a whole movie. 100 minutes long, big adventure, tons of fun, a beautiful heart, that is faithful and strong with…um, kindness. That last bit will only make sense to some of you.

They have about five or six songs, the best one from Rainbow dash about being awesome. A couple of decent ones, and a few forgettable, including Sia’s songs. Which on that note, Sia is my first real dislike of the film. Oh cool, they made a pony that looks like…Sia as a horse. Why couldn’t they have just made a singing pony by Sia be a pony? Kind of just feels shoe horned.

The story and plot is actually pretty good while also still being easy to follow. It isn’t entirely original, but it does some good things. The biggest problem with the story comes from Twilight Sparkle, our main character. The writers just totally seem to disregard her. She acts totally out of character from my point of view. Why? to advance the plot. And that sort of thing can really anger someone.

In a movie one can easily argue about how a character would act. But with 7 seasons behind us, it is easy to figure out what Twilight would do. They could have set it up better to better explain her actions, but she comes across as stupid, shallow, and certainly not the PRINCESS. OF. FRIENDSHIP.

My other biggest gripe? A totally huge disparity when it comes to pony importance. Of course Twilight is the most important, sure. But not too far after her is Pinkie Pie in terms of lines, jokes, and plot advancement. Then not far after, Rainbow Dash. But after that? Much further down, very far down, come our other three ponies. They basically exist as extremely minor characters with an occasional joke or reference. It was odd. Balance the main characters before you add an equal number of characters for celebrity sake.

Fans of the show should still enjoy it, minus the straight up murder of Twlight’s actions. I’m sure I will end up watching it again.