I guess I should make one thing clear right off the back. At the time of watching My Little Pony: Equestria Girls, I have never seen anything related to the TV Series before. So I am going into this movie completely blind, knowing full well there will be jokes and references I don’t get.

Now, I have since gone back to watch the TV show for a few episodes. You know, for “research.” I am not saying I am a “Brony” but the show has merits on its own.

It also has strange colored women. But if it worked in Doug, it can work here, damn it.

The story begins with Princess Twilight Sparkle (Tara Strong) heading to the Crystal Empire for the Princess Summit. All of her friends are invited too: Rarity (Tabitha St. Germain), Applejack and Rainbow Dash (Ashleigh Ball), Fluttershy and Pinkie Pie (Andrea Libman), and her dragon companion Spike (Cathy Weseluck). It is a pretty big deal and will be a pretty big party!

Twilight Sparkle still feels weird wearing her magical crown though, not used to the power and responsibility that comes with it. However, in the middle of the night, a thief breaks into her room and replaces her magical crown with a replica! Oh no! Sunset Shimmer (Rebecca Shoichet), a bitter former student of the Queen, has stolen the crown (an Element of Harmony) and put it through a magical portal to a strange new world.

Twilight Sparkle is going to have to go chase after Sunset Shimmer to retrieve the crown, before the portal closes in three days, and she must go alone. When she goes, she is transformed into a strange new life form: a teenage girl in high school! Sunset Shimmer rules the school with an iron fist (hoof?), too. The school is  also made up of people who have very similar personalities to her pony friends back home, but they are all enemies here!

Can Twilight Sparkle restore the friendship that used to exist in this school? Can she get retrieve the crown before the portal closes, trapping her in the human world for a long time? Will the fact that “Friendship is Magic” come up at all in this movie? 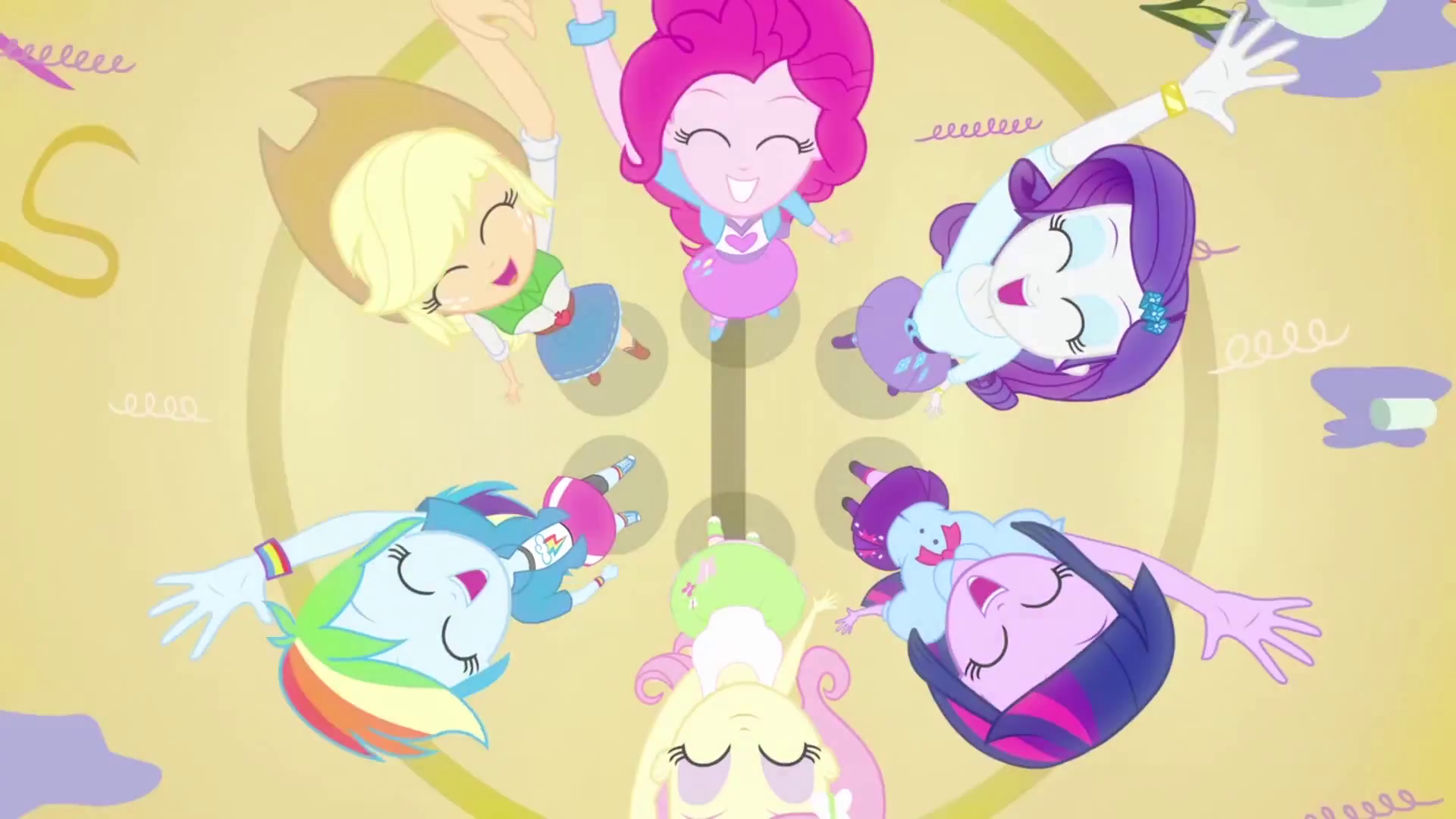 Audience wise, I was surprised that college and middle aged people actually outnumbered teenage and younger girls. Go figure, the “Brony” crowd is real and showing up in theaters, increasing ticket sales. In fact, they were a rather rambunctious group, constantly cheering and clapping at small cameos and tiny jokes. It actually made the experience better.

My Little Pony: Equestria Girls is only 70 minutes long and it is made up almost entirely of high school prom based cliches. But I still found myself laughing out loud several times throughout. There are at least four original songs as well, of course about friendship and working together, basically the cheesiest things ever. Yet they still entertain. They reminded me of this famous song from the first season of “The Powerpuff Girls.”

Unfortunately, this movie was probably just made to sell dolls and figurines. The rumors are that they will create a second show, one set in the human world with the girls if this one does well, creating even more merchandising for kids. Yes, every movie is made for profit, but no one likes an over saturation of one product.

The movie offers a great message for kids, especially with how they dealt with Sunset Shimmer. Often times, in kids movies, the villain will be completely one dimensional and just pure evil. This film at least breaks the mold from that.

My Little Pony: Equestria Girls can be watched if you haven’t seen the TV series, you just won’t get a lot of the smaller references thrown in. You just have to be able to find it in theaters, most only having one show time a week. It is good for families, and not incredibly boring, just probably an extreme cash grab. Still a better movie than The Croods. Brony up!