I didn’t think I would be able to see Mud until it was released on Blu-Ray later in the year. After all, Iowa isn’t necessarily the epicenter of the film community, so even a bigger “Indie” release like Mud would probably never get to our small town lifestyle. But here I stand corrected and I only had to wait three weeks after its release!

Hopefully this is a nice change for the indie/arts movies in the area. I’d rather get them 3 weeks late than never at all! Even though the Mud Trailer only seems about small town living and befriending a criminal on the run, it still looks awesome. 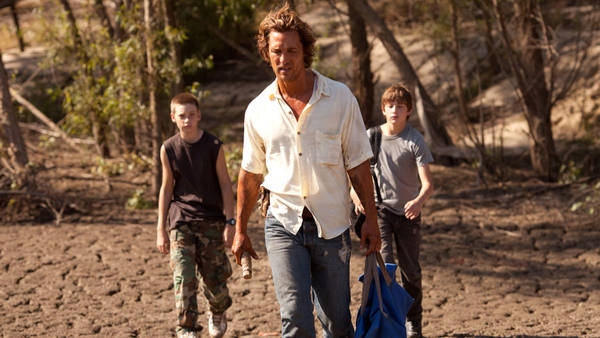 My current guess for crime is pedophilia.
Arkansas is generally a quiet state that you never see in the news about…well, anything at all. Ellis (Tye Sheridan) is a 14 year old boy who lives a relatively normal life on the Mississippi River. His family lives in a house boat, he gets an allowance from his dad for helping deliver fish to neighbors, he goes to school, but mostly he just likes to adventure and play outside. With the help of his friend Neckbone (Jacob Lofland, first film/TV role ever), they find the strangest thing: a boat stuck in a tree on a small island.

Finders keepers, so they are happy to have a new boat/tree house. But then they find out they were not the first ones there. They find a stranger with crosses in his shoes, a gun, and a request. Help bring him food and eventually restore the boat, he will give them his gun. He is there waiting for a girl, Juniper (Reese Witherspoon), and cannot leave to find her because he is wanted by the law for a mistake.

He also wants to go by the name Mud (Matthew McConaughey). Strange name, kind of dirty, but who am I to judge?

Mud will have to rely on two kids going through their own personal problems to help him escape down the Mississippi, hopefully with the love of his life. Also staring Sam Shepard as a mysterious neighbor on the river.

I can’t tell if they are worried, scared, or bored. I will continue to assume pedo.
McConaughey, McConaughey, McConaughey. Holy crap, McConaughey. Maybe it is just his voice, which gives him an unfair advantage, but I am in awe of his performance. He outshines any other role he has been in (yes, this includes Magic Mike), but he also does it with such ease, it appears that talent just oozes out of his body.

Mud itself is a pretty slow moving film, which fits perfectly given its setting. It uses scenic swamp imagery to really drive its ideas home, and helps us realize that no one, especially our heroes, are perfect. I classify this film as a Drama Romance, but it wouldn’t be like any Romance film you have seen before. The ending is unpredictable, the characters and finale are realistic.

Although I liked where all the characters ended up and how their plot lines finished, I didn’t like the entire ending. The ending included a shootout, which was a stark change of pace from the rest of the film. It seemed like a few minute where realism flew out of the window, with results that are really out of place.

Despite how fantastic his acting was, I doubt McConaughey will receive a nod from the Oscars. Sure, it is only May and I haven’t seen any other big contenders this year yet, I just doubt that his character played a big enough role to be recognized as one of the absolute greats.