Joss Whedon is a sly bastard.

While working on post production for The Avengers in 2012, he had to take a vacation via his contract. What did he do on his vacation? He fucking filmed this movie, Much Ado About Nothing, in twelve days. TWELVE! A WHOLE MOVIE! In secret!

Who makes a film in secret? That guy does.

For those of you who don’t know, Much Ado About Nothing was also a film in 1993, but it had stars like Denzel Washington, Keanu Reeves, and Robert Sean Leonard (when he was known as that guy from Dead Poet’s Society, not Wilson FROM House M.D.).

That version wasn’t bad in any real way. It was super Shakespeare. It was done well, and everyone did good. Yes, even that guy. 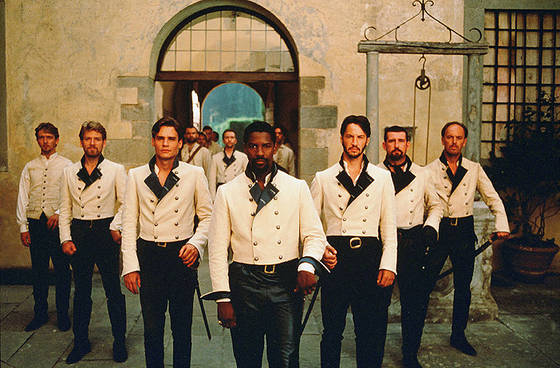 Basically the best actors the world had to offer us in 1993.

Ah love. Love is grand. And sometimes leads to marriage. That is the goal of one Don Pedro (Reed Diamond)! He has fallen madly in love with Hero (Jillian Morgese) and has vowed to win her hand in marriage, but he needs some help from his friends.

Oh wait. That goes on as planned pretty easily (minus some second act shenanigans and mix ups). That is because they are not the main characters of the play/movie! No! It is Benedick (Alexis Denisof), friend of Don Pedro, and Beatrice (Amy Acker), friend of Hero! Both are known for their wit and their disdain for love and fairy tale endings. Nonsense all of it! Well, weddings take some time to plan, so Don Pedro, his friend Claudio (Fran Kranz) and the others get a bit bored with the wait and decide to play a game. They will make Beatrice and Benedick fall in love with each other!

Well, yes, other things happen in the progress. But who cares. We got people being tricked into love! Who cares about the rest? Sean Maher plays the mean spirited Don John, Clark Gregg plays Leonato, Hero’s dad, and Nathan Fillion plays Dogberry, the constable.

Oh yeah, it is filmed differently too.

So, why did Joss Whedon choose to make this secret movie? I have a theory. I think he just really likes this story, and damn it, he wanted to do a modern Shakespeare movie. Simple as that. This is one of the clearest definitions of a pet project I have ever seen. He made his first black and white movie, a movie with a script he didn’t write (technically. He wrote a screen play…but you know. Not really), it has a lot of his actor friends, and it was done in secret. I seriously still can’t believe that.

Now, the question I ask is…did this movie need to get remade already? There are a lot of Shakespeare plays, and many that don’t have plays. We are about to get our fiftieth film adaption of Romeo and Juliet (roughly). The answer is no, it didn’t have to get made, but no movie has to get made.

For me to really enjoy this, I would hope that this film offered something new. Well, new wise, it is filmed in black and white, and in a modern setting. There is also one subtle big difference, alluding to the past of Beatrice and Benedick, that I am pretty sure has never been done before. But honestly, it doesn’t feel like enough. Modernizing this really didn’t mean much when it is just a big house party, really. Unlike Coriolanus, which was definitely changed for a modern way, and Romeo + Juliet, which was beyond weird.

The acting was decent. It was a bit weird seeing all these people we know from other things doing Shakespeare, but that is to be expected.

I just don’t think this was different enough or unique enough to be considered really great.