I had planned to watch this before the latest health development from Mr. Hockey / Gordie Howe. Thankfully he didn’t have another stroke, but man, I have to face it that one of the greatest players is going to die soon. That is very sad, but at least I was old enough to really know about how awesome he was and that he is such a big face in the Red Wings scene over the last few decades.

I also thought this movie was a documentary, but uhh, clearly I was wrong. Even worse it is a TV movie. Even worse is that it is a Hallmark made for TV movie. Even worse, I thought until like, 4 minutes into the movie that it was still a documentary. That was an embarrassingly long time before realizing it was something else. Either way, I will write it like a documentary review either way given its status and give you just one picture. With that, Mr Hockey: The Gordie Howe Story is not a complete life bio, but instead takes place after his first retirement from the Red Wings.

Now Howe (Michael Shanks) is working a desk job as a VP for the Wings and kind of bored. He thinks he can still play, but he has been retired a couple of years. Also, the NHL is in huge disputes with the WHA, another league who is offering higher salaries to steal the better players, despite not being a storied league. They also can draft players younger than the NHL.

So when the Houston Aeros decide to pick Howe’s sons, (Dylan Playfair, Andrew Herr) with their first and later round picks, unexpectantly, the Howe’s move from Detroit to Houston, and Gordie wants to play on a team with his sons. Give it another shot, despite the implications and turning away from the NHL. 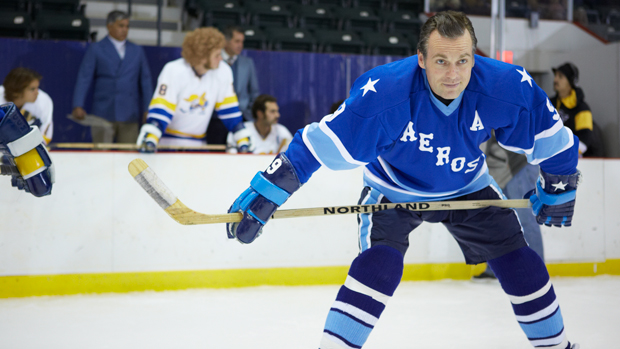 And now the fucking Aeros are the Iowa Wild. So Sad.

At this point, Howe was 44, so it was already impressive. Especially since he played for another six years or so, until he was 50, and until the WHA and NHL ended up merging, allowing him to play in an All-Star Game in Detroit before finally hanging up the laces. Also with Kathleen Robertson as Mrs. Hockey and they did a good job of showcasing how important she was. Also Lochlyn Munro as Bobby Hull, which makes me laugh a lot.

As it is a Hallmark movie, yes, this is basically a cheesy inspirational story. And given the number of random ass baseball, football, and basketball players who get better quality films, it is a bit disappointing that a top 5 all time famous Hockey player gets this treatment, but it is still better than nothing.

It did a nice job of explaining his decision and showcasing his relationship with his family. I did love a scene where Mrs. Hockey was explaining the rules to neighbors in their backyard to get more people to go to the games, because honestly, the 1970s in Texas was certainly like that.

But as it is a Hallmark movie, it doesn’t go into any great detail or showcase the game in an exciting way. So as a sports movie, you won’t get your jollies off by watching.

All I really know is Gordie Howe kicks ass, played hockey forever, and will be missed when he is gone. Maybe we have to wait til after his death to get a better movie in his honor. Until then, this one is just okay.