Normally I do my movie prep right before I see a movie, not months. But hey, turns out I never watched Monsters Inc., and some other variant of the movie is coming out this summer. But it was in 3D!…Which kind of makes this a new release…which means I can review it. Kind of like how I did a review for Cars, despite having no good reason for that one.

THREE DIMENSIONS THOUGH. WHY NOT. 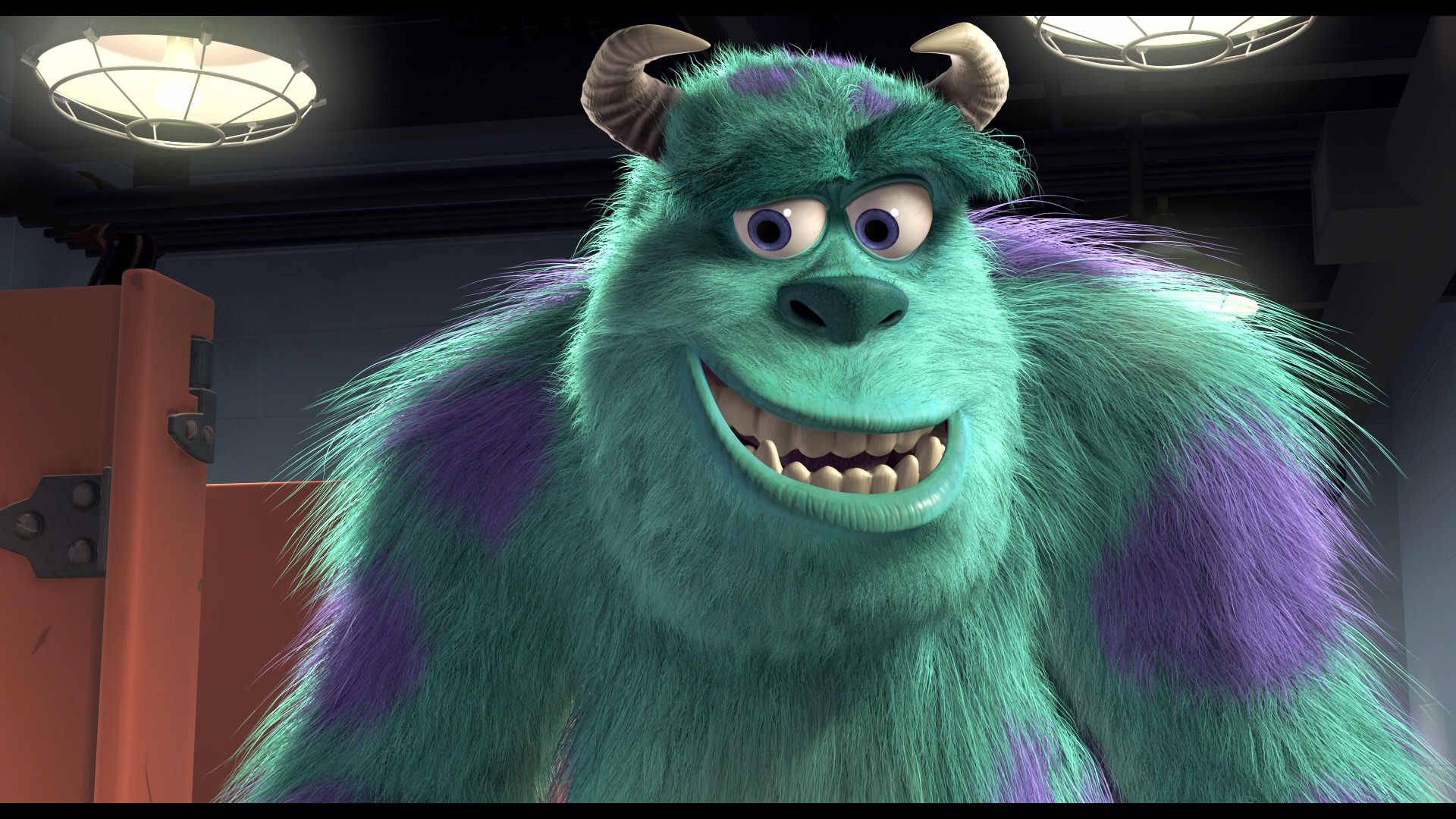 Imagine this face popping out at you.

Monsters Inc. is the dark and twisted tale, of transdimensional travel and the energy crisis. Thanks to the onslaught of violent video games, tv shows, and the moral fabric of society falling, kids have become emotionless zombies that can no longer react to fear as a stimuli. This has a big effect on the Monster society, another dimension away from the human world.

They have not only perfected transdimensional travel between the worlds, but they can go to any home in which a closet exists, and have each one labeled and organized to go wherever they want. They have also figured out how to refine the screams of children into portable energy. But as I already stated, the screams are lowering. Sure, some monsters, Sully (John Goodman) and Randall (Steve Buscemi) are approaching record breaking numbers, but it is probably due to the apathy of the other workers realizing their jobs are at risk and their world as they know it is crashing around them.

Mike (Billy Crystal), Sully’s partner is too engulfed in the race to notice the crisis, and to smitten with a receptionist Celia (Jennifer Tilly) to realize the changes.

The drive for more scares engulfs Randall and Sully, so much that they end up doing whatever they can to get ahead of the other. Randall, the lesser scarer of the two being born with a smaller frame, has to rely on his intellect to give him an edge, much like the common ancestors of our past began to make tools to fight off the mammoths. He is smart enough to realize that the human kids are not actually poisonous to touch, but that was instead a message spread around just to increase work performance in these tough times. If you are scared of them, you will be more willing to try and scare them as much as possible.

Randall actually invents a machine to extract and force screams from not only children, but any source, monsters, whatever. Presumably beta testing is over, and now he has one test subject less, a girl who is named Boo. Boo is immune to fear in the traditional sense, referring to monsters as kitties. If his machine can work on her, it can work on anyone, and Monstropolis can continue to be prosperous.

But Sully, for whatever reason, is afraid of change. He made his record, and he doesn’t believe in that new form of science. Maybe because he hasn’t tested it himself. Either way, despite not knowing the full story, he decides to do everything in his power to get Boo back to her room, because that will protect her somehow.

It isn’t until he discovers and alternative form of energy from the children, through laughter, does he begin to accept change. It is stronger than the average scream, but is it easier to get laughs through the same manual labor process versus machine work? Does he really only care about the laugh method because he found it out first? Or maybe he is going around his boss, Mr. Waternoose (James Coburn), just to take over his job by the end?

Is Monsters Inc. really a story about how unions are a good thing, and that innovation through technological advancements leads to loss of jobs, in order to be more efficient? 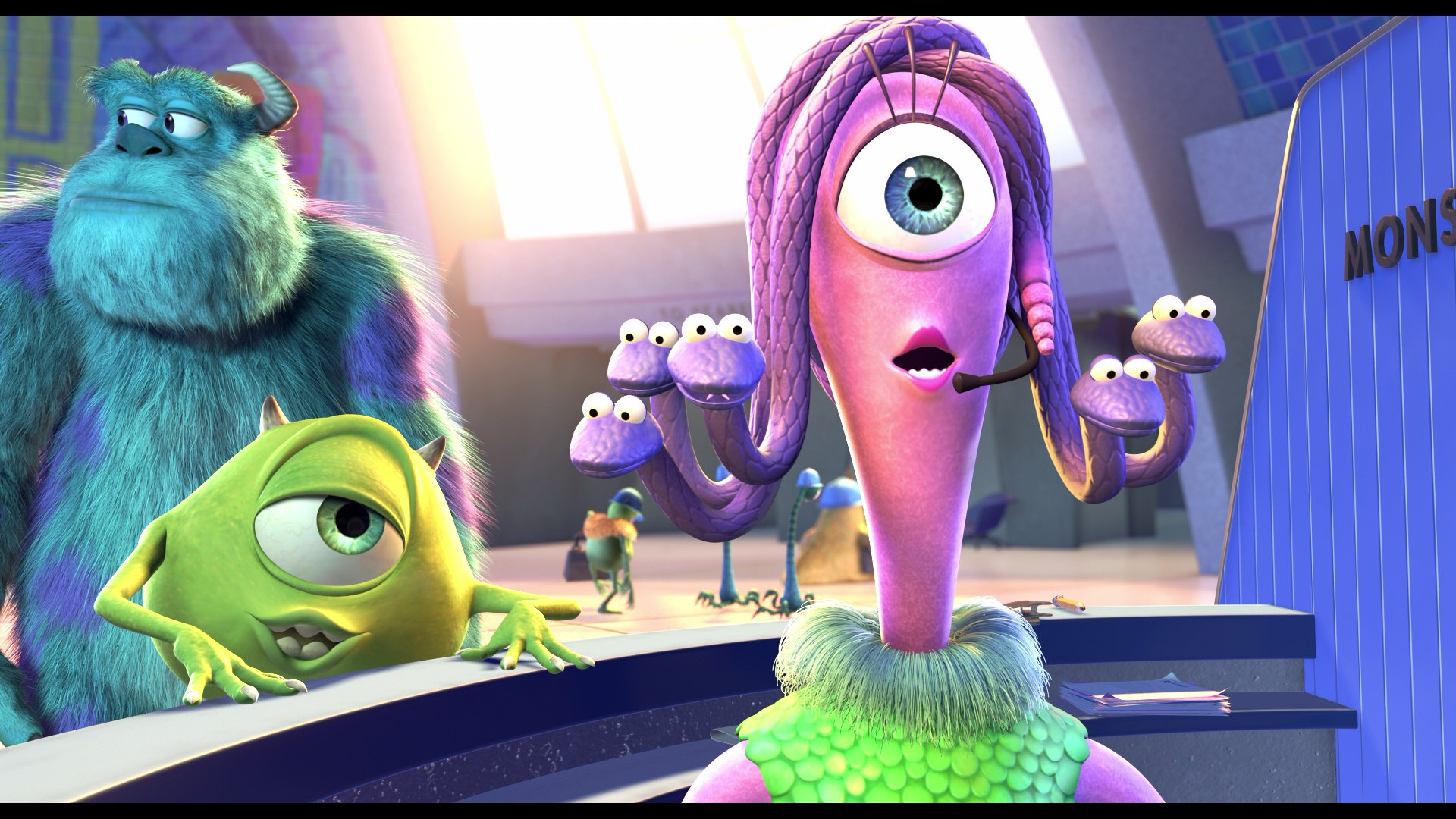 For whatever reason, she reminded me of Katy Perry.

So why not talk about Monsters University? Seems like an odd direction to take the franchise. A prequel, 10 years before Inc. This will be a movie about how all the characters we know learned about each other and developed friendships. I am expecting it to be 100% Monster, 0% Human. After all, humans will still be poisonous or whatever. I think it would have a bit more interesting have a real sequel, what that would be about, I have no idea.

I think the over all plot was a fine one, minus a lot of instances where I didn’t understand the character actions. Such as taking Boo from the Sushi shop, when they could have left here there, ran away and been done with the problem. Or the door factory chase scene.

The 3D was good and felt natural. Since the movie was made in 2D, it was just there for rounding, not having shit fly at you, which was nice. Billy Crystal made his character his bitch, like normal. The rest of the voice work was relatively okay.

Over all, I don’t see the hyper I originally heard from the movie. Way better than Cars though.