“Inspirational sports movies” has got to be one of my favorite categories of movies. They are usually long, have drama, and sports! And they hopefully make you feel good at the end. Also preferably with nice quotes during locker room moments, you can you steal their good words later when you are playing a non important Intramural game or maybe even a video game.

Jeez, I pretty much like most of the ones I have seen too. I did not like We Are Marshall, Gridiron Gang, or Miracle though (even as a huge hockey fan). Seemed like they were just copies of other things I had already seen, don’t care if they were “true stories” either.

Moneyball is another “True Story”, based on the Oakland As of 10 years ago going for a title, with little money, and a different way of evaluating players. I’d say the biggest problem with it is that it is so soon, and MLB, so even if I hate baseball, I know enough to know that the team hasn’t done squat after when this movie takes place. So very disappointing in that regard! 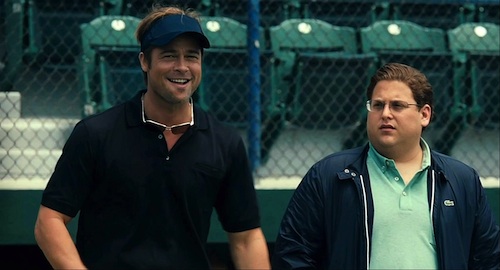 But hey! Those movies didn’t have a serious Jonah Hill.

Shit. But each one of them had an action star as the head coach. Oh, what? Philip Seymour Hoffman is the coach/manager, but Brad Pitt is the GM? Thank god.

So Pitt is the GM, and just saw his team lose in a best of 5 series after going up 2-0. Shame. They are losing their star first baseman. With no real payroll available to find one guy as a suitable replacement. Even though trades are attempted, including with the Indians. Pitt sees Jonah Hill in the corner, and thinks he is secretly calling the shots, so he finds him, talks to him, and buys him from the Indians to be his assistant GM (a huge upgrade). He is a Yale graduate in Economics, and think the best solution to replacing the first baseman is to bring in three different guys, undervalued. None of which play first base.

Chris Pratt plays the catcher, who no one wants, and has to change position. He also has a smaller role than I would have expected, but does a nice job of being “Serious”. Stephen Bishop plays David Justice, a “washed up” athlete who the Yankees cut, and therefore the As can afford.

Of course since this is based on a true story, all the trades / transactions that happened in the movie, actually happened, and it isn’t just a team of misfits, like The Replacements or Major League. But the movie is about the first attempt to try and rebuild a team through this new method of evaluation, and their quest for the world series. 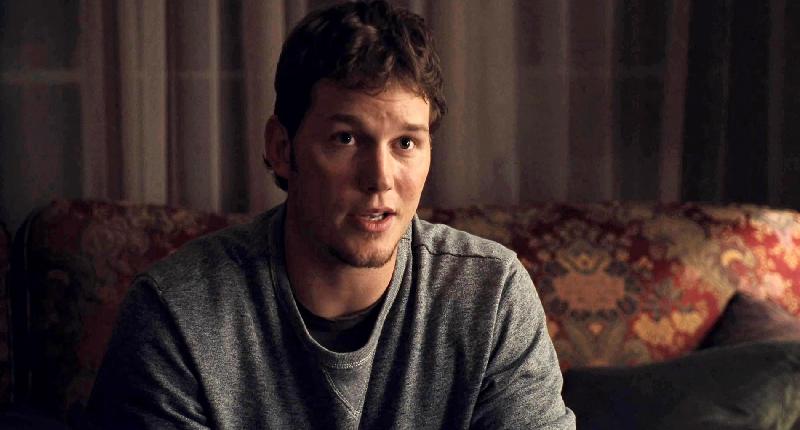 Chris Pratt’s character may be important.

Overall I thought the movie was very well down. I think people argue on whether or not Pitt acted good, or acted at all. They try to show his character to have a lot of past demons, based on his own dealings as a MLB player when he was younger. I thought he did a good job, like most of the leads. I think the manager character was probably way too stubborn in all of the talks with the GM, but hey, what do I know?

Movie is over two hours, and has a touching ending too, and I think is interesting enough. Don’t even have to understand much baseball to get it. Hitting percentage is probably the easiest thing to grasp, and one of the things talked about most.

But I might have enjoyed a fictionalized movie about this more, just to have a better outcome.