As promised, Mirror Mirror review slightly after Snow White And The Huntsman. I had to give myself time to fully digest the plot from my system. Because no one wants to see two similar movies so close together.

Unless you really really love Snow White based content, then I don’t know. 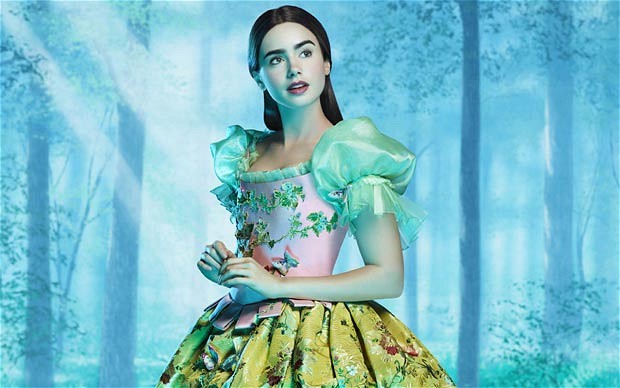 If you are that above person, check this shit out. It’s Snow White. Fuck yeah, right?

In this movie, Snow White’s (Lily Collins) mom died during child birth. Very sad. Her dad (Sean Bean) thought it would be good for her to have a mom, so he found a beautiful woman to call Queen (Julia Roberts). Many years after that, there is rumors of a Beast in the forest, to which the King goes to investigate but never returns! Ten years after that, hey look, Snow is turning 18.

She has been shut inside, the Queen making everyone thinks she is afraid of the outside, in order to make her a bad ruler, while she taxes the kingdom to poorness for rich parties. Boo. Well, the Baker Margaret (Mare Winningham) is Snow’s biggest supporter, and lets her know that shit is going bad and she wants to investigate. Well it sucks. Eventually she wanders the forest where she finds Prince Alcott (Armie Hammer) and his assistant, tied up, attacked by giants! Or at least dwarves dressed up as giants. They go to the castle and thank the girl.

Oh shit she is a Princess, they find out later, and the Prince likes her a lot. Pisses off the Queen, who demands her death, but instead, she escapes to the forest and finds the dwarves. Queen banished them from the kingdom and they are forced to live alone! And they are all midgets. Like Jordan Prentice and Ronald Lee Clark.

They agree to let her join and train her to fight and steal, and increase her wit so they can steal from the queen the taxes and return them to the city! She is even able to fend off an attack from the Prince and a group (partially under spell). Once the Queen uses more magic to have a wedding, the group steal the Prince and attempt to break the spell. But will the beast that lives in the forest come a knocking? Why does the Queen waste her precious magic on turning her assistant (Nathan Lane) into a Cockroach for a bit, instead of like, some torture. 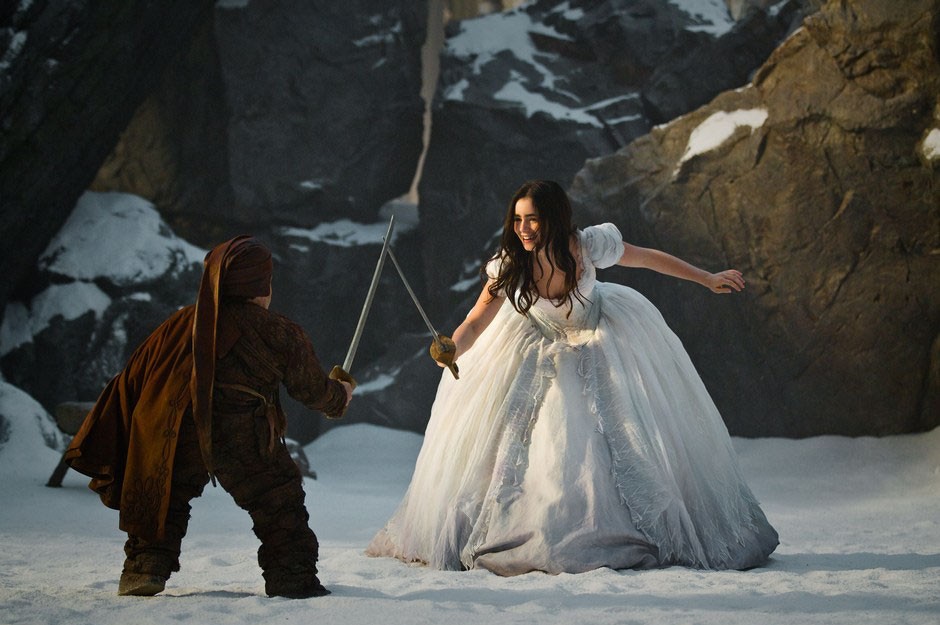 The fact that she gets trained and is more than one fight makes her arguably more of a warrior than the Snow White in that other movie.

Alright, so that the films are a bit different, Mirror Mirror ended up being the “comedy one” instead of the “Serious one” (which there has been numerous of both in the past). If I judged the latter poorly on being a bad serious movie, then I would have to judge this based on its comedic value. Well, not much was too funny. I thought Julia Roberts was pretty bad in this movie as a Queen. Charlize Theron blows her out of the water (“Just review this movie, damn it! Stop comparing!” – Reader. “Fine” – Me”).

But I felt this was an overall more complete feeling movie, with a bit better plot. Cheesy as all heck, but everyone likes Cheese. The visuals were vivid as shit, because this is done by the same guy who gave us the Immortals, which focused more on visuals than a decent and coherent story. (Alright alright, no more other movie talk). The ending also, out of no where, featured a weird Bollywood number, which I enjoyed, but uh, the lyrics/singing weren’t good.

I think overall the beginning was a bit too slow, but it picked up once Snow White was “killed” and left the castle. Dwarves were sweet, Prince was amusing, and Snow White was more bad ass in this film than the other (Hah! Still did it anyways. Neener neener). But still weak in other parts. Oh well.