Another week, another documentary nominated for awards. I love this time of the year, by the way.

Meru was nominated for a Spirit award, and it only has four letters in the name. These are fun facts you may have already known!

Meru is part of the Indian Himalayas, but it is not Everest. It doesn’t have to be tallest for it to be important. Meru is a peak that was nicknamed “Shark’s Fin” for every reason you might guess. And it was also notable for having no confirmed climbs to the top. Sure people have tried, but it is an incredibly intense peak. It involves ice climbing, rock that shifts around when you move, hundreds of feet of steep vertical stuff. You name it.

It is a rock climbers dream and nightmare at the same time. Meru is a documentary filmed by three dudes who decided they would be the first to tackle it.

Now it should be noted these aren’t just three random assholes. No, these guys are all very professional mountain climbers, some of the best in the world, and they are super serious. Some of them have wives and a family. Some of them can be pretty free spirited.

But in 2008 they decided to work together and take on Meru. 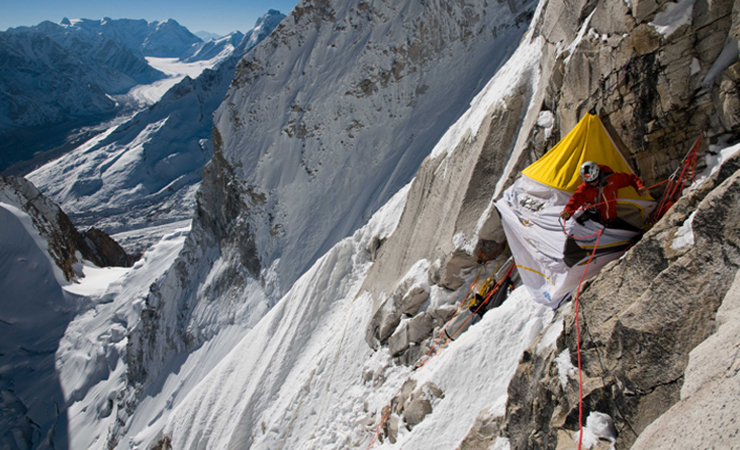 This is one of the biggest “NOPES” I could imagine after climbing a giant spider.

And they don’t make it to the peak. Shit sucks. But they recorded the attempt and it goes into the documentary. They brought their own cameras to do it all of course, because no fourth guy who isn’t a climber but good at holding cameras could even attempt to make it. After that they took a couple years to do other things, but they knew they’d try again in 2011 before it was too late.

I won’t talk more about their second attempt (and if they were the first to climb to the top). But I will talk about how the documentary goes over their own personal struggles before the second attempt.

Namely, one of them getting injured while snowboarding, with incredible head injuries, and only having about five months to recover before going back up. And another being covered by a giant avalanche and somehow getting out of it unscathed. Yeah, he is probably a super hero ala Unbreakable, I agree.

Either way, this is a good indie documentary in terms of people trying to do the unthinkable. The fact that they were able to put all their film together to piece together something remotely watchable is a testament to their drive, since none of them are professional filmmakers.

At the same time, it feels like it is just a bunch of people trying to climb a dangerous peak and glimpses into their climb. Is it impressive? Yes. But I am not a mountain enthusiast, so I still only found it slightly entertaining.