I first heard about Meet The Patels months ago, and that is because an alumnus from my High School was the director! Now, she went there 14 years before me or so, but it was still cool. We got quite a few newsletters letting us know it was going to theaters and eventually Netflix.

Despite the connection though, I won’t be biased favorable for it. If anything, I might be biased against it. Because despite our school connection and being a member of the press, they wouldn’t give me a press screening to watch the film. What a bunch of jerks.

Patel is apparently a very popular Indian last name. Our story is about Ravi Patel, who is about to turn 30 and is currently unmarried. Unmarried and Indian! At that age! Oh no! His parents were part of an arranged marriage of course, after his dad had already moved to India. His wife was the 12th match and they knew it would work. And the mom is also quite good at arranging marriages, so it looks bad that her son hasn’t even had a girlfriend in 30 years!

But…but Ravi has had a girlfriend. He was dating a white ginger chick for two whole years without his family knowing about it. But he had an “Indian” problem and some commitment issues, so they ended it right before the documentary. The “Indian” problem is that he has always pictured himself marrying an Indian woman and knows it is what his family wants.

So he goes to his parents and agrees for them to work on arranging a marriage for him. 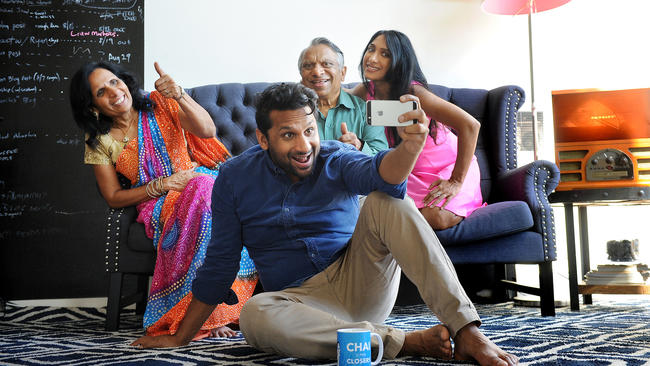 A photo of them taking a photo! Madness.

Now, arranged marriages aren’t like they used to be. The parents had to print out a bio sheet on their son and send it all around the country to friends and family, all of which passed it on. At the same time, the parents began to receive information on ladies across America. They sort through the ladies and give him women they think he will enjoy. He just has to go on a date with the woman and they decide on their own if they want to date any more in the future. If not, the parents keep trying and keep hooking them up with company.

And Ravi’s sister, Geeta, is there the whole time to document and film the whole thing. Weddings, Indian dating sites, and speed dating at Patel reunions. No it’s no weird. Basically everyone is a Patel, and most Patel’s just marry other Patel’s from different parts of India.

As a documentary, this story is about Ravi, but he isn’t really an interesting character. What makes the documentary interesting is learning about modern Indian American dating customs. The levels the parents go through to provide for their children. That is what an average viewer will appreciate about this documentary.

Ravi’s story on its own is…well, predictable. If you know how stories work, you can probably figure out how this thing will end already. I hope it was actually a real story and not a scheme done by the brother/sister to make it seem like a better story. But who can really say?

Meet The Patels is the type of documentary you might want to put on while working on other projects, not bothering to pause it if you need to run to the water closet. An average story about average people, with some nice culture aspects occasionally thrown in.

2 out of 4.
Tags:2 out of 4, Documentary, Geeta Patel, Meet The Patels, Ravi Patel, Romance