So, I think Mean Girls 2 was a made for TV movie, on ABC Family or something like. It is also a stand alone film. You don’t have to know anything about Mean Girls, because the two films are nothing alike. Okay, it does happen to be the same high school. Oh, and the popular people are “Plastics” again, but hey, whatever.

Picture: Some Plastics. A girl no one likes. And the main character. Can you guess who is who!?

This movie is about a girl named Jo (Meaghan Martin). She moves around a bunch because her dad does work for…something. I dunno, it involves fixing cars. She is good at working with tools too. Yes, I realize she is a woman, weird right? She has rules at new schools. Befriend no one, avoid girl drama, avoid dumb boys. Usually works out. But this is her last stop before college. She wants to be an Architect! She wants to go to Carnegie Mellon, but she also needs money. Especially since she has impossible tasks to get a scholarship like “over 2300 on the SAT, verbal and math”, a completely nonsensical statement which proves the writes don’t know how to get into college.

Despite already kind of making friends with Jennifer Stone (or at least hating the popular kids with her), her super rich dad offers her money to be her friend. As they are stupid wealthy (and why the rich girl hates her. Because she is slightly more wealthy, yet not as pretty) they want to buy her happiness, and realize she needs friends. So reluctantly, she takes it, since she needs to pay for college, and well, you know where this is going.

She becomes popular, and so does her new friend (Who she really befriends). They have a rival group! The Anti-plastics. By the title of Mean Girls, you realize that the only really big mean things that happen are a result of Jo, not the “mean girls”. They eventually retalliate, but a bit too far. So ired of all the shit, tired of being a “girl”, Jo (leader of the Anti-Plastics, if you forgot) wants them to settle it like men! Footballllllllllllll. 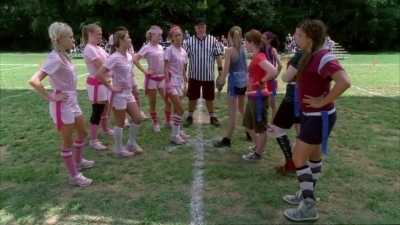 So yeah. Nothing like the other mean girls. BUT. Tim Meadows in this movie, and his role is a bit funnier than the last. Still the principal, of course. That’s why this can be a sequel.

I think a lot of the hate comes from the fact that it is “2” and therefore compared to Mean Girls. On its own, this is an okay movie. It has some funny parts, expected parts. Is it a lot worse than the first? Heck yeah. But it doesn’t mean it automatically is one of the worse movies ever. It is okay and decent. This just goes to show, movies can be better than their name or cover. Except for Mars Needs Moms. That one cannot be.