Hell yeah, this movie has either a vague metaphor title, or a very specific title.

Mao’s Last Dancer, is it really about the last dancer for Mao in China? Or is it about the fall of communism, with art? Who knows! It can go either way. I already feel like I know a lot about the movie before it starts, on title alone. So exciting. 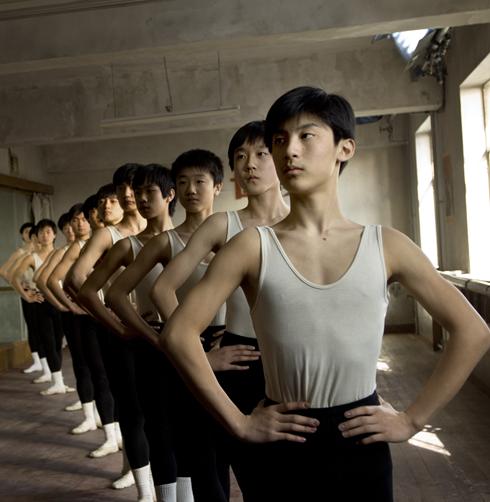 “All together now kids, one, two, three, ‘Fuck your metaphors!'”

Li Cunxin (Chi Cao) is just a young boy living in a rural part of China. But when officials from Beijing come to visit the school, they are only told they are looking for a few special students, but not told why. After some pleading, the teacher gets Li picked, and he passed some cultural tests and performance tests. His parents, Dia (Shuangbao Wang) and Niang (Joan Chen) are super proud, having seven kids, that at least one of them will potentially go on to do great things. Hooray cultural revolutions.

And where do they go? To a ballet school. Whaaaa. Li ends up being the least skilled of the dancers, and gets called names more so because of his mess ups. He does training at night to get better, when he should be sleeping. Shame on him. Eventually he kicks the most ass, and becomes a stand out performance, even in the weird mix of ballet that exists in China, between normal Russian stuff to weird revolutionary imagery. Ben Stevenson (Bruce Greenwood) is the owner of an academy in Houston and requests Li to come to America as a foreign exchange student for three months.

While there, at first reluctant of Western Culture (from his years of training and learning how backwards the Capitalist system was), he eventually grows to love it, and also begins to have interest in another dancer Liz (Amanda Schull), whom he is a far better dancer than, but hey whatever, she’s cute.

Obviously time eventually passes, and he has to go back to China. But what if he doesn’t want to now? There has to be a way to stay in America, with out full on defecting and potentially harming his family. Afterall, he still likes China, and would like to return, but wants to go back and forth. And maybe eventually move to Australia. Because fuck everything.

Living the American dream. Come to the country, and fall in love with a white woman.

This is obviously a biographical movie, of this dude who came to America from China and kicked some ass at some ballet. So if you like ballet, there is a lot of good ballet in this movie, for you to enjoy. Like Step Up, but not really.

Definitely an interesting story, and interesting that they spliced his childhood and American travels back and forth. So we knew where they were going with the movie, and explain things in a good pace. The latter parts of his life seem to have been a bit swept under the rug (with the and then later!…title cards), like moving to Australia, after divorcing Liz, and finding an Australian girl. But hey, at least he eventually got to go back to China and perform for his village. Just had to wait for Mao to keel over first.

Interesting story, good dancing, potentially some propaganda, and a decent family movie, if you want to show a bit of history (but not much).