I’ve finally done it. But my money where my mouth is.

I can make a claim, “sure I will watch anything”, and prove it by watching a bunch of shit you’ve never heard of. Hell, half those movies could be fake for all you really know. A huge conspiracy!

But what about things that are often considered very bad, that everyone knows about. Stuff that takes me out of my comfort zone, and in uncharted waters? Yeah, that is really what you want to see.

Well I have actually tried to watch a Madea movie before, Madea’s Big Happy Family. But halfway through, I realized I still had no idea what was going on and just turned it off. I rarely stop movies. So with Madea’s Witness Protection, it was time for try two. And I would watch it in a theater so I couldn’t just shut it off without getting arrested. 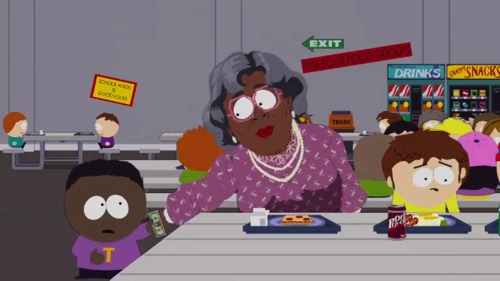 My only actual Tyler Perry knowledge is what South Park has told me. Apparently black people can’t help but give him money!

George Needleman (Eugene Levy) finds himself quickly in a pile of shit. Sure, he is ‘happily married’ to his second wife (Denise Richards), has a daughter from the previous marriage (Danielle Campbell) and a boy from his current (Devan Leos), but his job is about to make things a lot more difficult. From an accountant to CFO, he was placed ahead of a charity department of a company, and clearly under qualified. Turns out it was intentional, because through the charities they were doing that ponzi scheme stuff. His boss (Tom Arnold) set him up as a fall man in case they ever got caught, and guess what, they did!

Turns out the local mobsters also were heavily involved, and don’t want George ratting them out (Even if he knows nothing). Shit violence. Well it turns out George is more than willing to cooperate as long as he and his family, including his delirious mother (Doris Roberts) are protected.

Agent Joe (Tyler Perry) who has to quickly find a place for them to stay ends up convincing his aunt Madea (Tyler Perry) and father Brian (Tyler Perry) to take them in, for the cool cost of $4,000 a month. He just didn’t tell them they were white people. Oh man!

Awkward shenanigans and racial stereotypes occur, along with the plot of a local man Jake (Romeo), who invested all of their churches money in the company and now find that they are probably going to lose the church. That would be, uhh…bad? 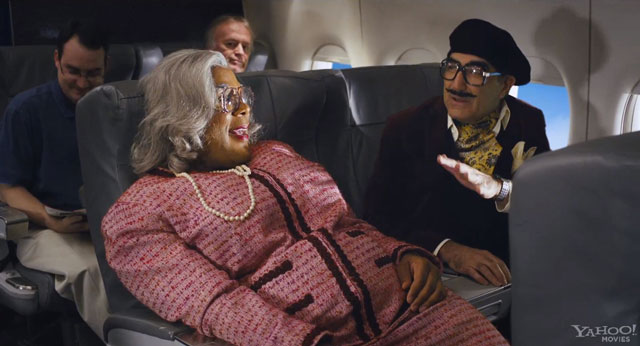 Everyone quick, look at Eugene Levy dressed like a fake frenchman. Look at him.

So this movie has a lot of hate (probably mostly the series of movies not this one in particular), but is it justified? Well I guess its a comedy, lets look at the jokes! A lot of easy jokes are made in the movie. Unreasonable social awkward person going through TSA and being on a plane for their first time. That stuff isn’t new at all. Differences between white people and black people, poor people and rich people, and real family values. Ehh. Man in a dress? Happens a lot.

I did laugh at a few scenes, mostly at the absurdity of it them, but it was mostly a silent reaction movie from me.

In fact, it took me awhile to realize, but a lot of the film began to feel unnerving. I couldn’t put my finger on it, until about halfway through, but I realized that the conversations never felt real. There was always just a little bit extra pause before the next person talked. Not sure if that was for a quick audience guffaw or what, but it felt like everyone was alone. This just seems like bad splicing probably, since they could have shortened a lot of that downtime. And yes, obviously, when Tyler Perry talked to Tyler Perry, he didn’t have Tyler Perry to talk to, but seriously, could have been edited better.

Also the ending? Total crap ending. Everything wraps up quickly and magically, and an extremely illegal act goes overlooked. Fuck any morals.