Machete started out as a fake trailer in front of the Grindhouse movies, Death Proof and Planet Terror. Robert Rodriguez decided that the fake trailer needed to be made into a real movie and Machete was born! A movie that was made on purpose to be bad, it had plenty of potential, but to me just felt boring. I wasn’t impressed.

I basically forgot about the franchise until they announced both a sequel and a third film coming down the pipelines. The sequel, Machete Kills just hit theaters, but the third film really caught my eye thanks to its title of  Machete Kills Again…In Space. With a name like that, this franchise can’t be that bad!

Yeah, it looks like he is about to kill it here.

After the death of his partner (Jessica Alba), Machete (Danny Trejo) finds himself at the wrong end of the law, blamed again for a murder he did not commit. To get out of the jam, the President of the United States (Charlie Sheen / Carlos Estivez) has asked him to go on a suicide mission into Mexico. His mission? To stop revolutionary/mad man Mendez (Academy Award Nominated Demian Bichir) from sending a nuke straight to Washington DC.

Sure, a simple enough mission, but there are a lot of factors that stand in his way. Million dollar bounties, crazed heart monitors, multiple personality disorders, priests seeking redemption, a hitman called El Camaleon, brothels, space scientists that know the future, a madam with a grudge, former friends, and clones stand between him and his goal.

There are so many celebrities, trying to list them all would be insane, but I will do it anyways. Telling you their role in the film almost seems like a disservice, and plus, you probably wouldn’t believe me. The movie includes Mel Gibson, Amber Heard, Michelle Rodriguez, Sofia Vergara, Lady Gaga, Antonio Banderas, Walton Goggins, Cuba Gooding Jr., Alexa Vega, and Vanessa Hudgens! 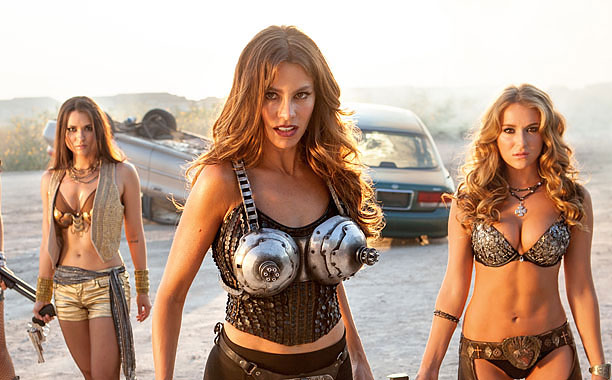 One of the best “jokes” in this movie is having Alexa Vega in close to nothing. Since he worked with her on Spy Kids 12 years ago.

As I mentioned before, Machete was trying to make a good/entertaining “bad movie,” in honor of all the poor quality B-movies of the 70s/80s. It is pretty hard film type to make correctly, the last one I really enjoyed being Black Dynamite. The first film had a lot of appropriate jokes for genre, but the overall plot and tone bored the crap out of me.

Machete Kills corrects these mistakes and more. First off, it was actually entertaining. Over the top action from start to finish and nonsensical plot lines that will cause you to stare at the screen in confusion. Normally that would sound terrible, unless terrible was the goal, in which case it sounds great! Machete Kills put a lot more detail into purposefully editing the film in a sloppy way to increase its humor potential. The film has a rampant disrespect for obeying the natural laws of our reality: where a broken car can drift 500 miles in mere hours, and where several days can pass in only 20 minutes.

Most of the jokes are smaller references or in the background, outside of the absurd characters themselves. Despite how outrageous everything is, the characters themselves for the most part are incredibly serious. After all, their lives are on the line. The movie sports a lot of death and violence, which is all packaged in creative ways.

Machete Kills improved a lot from the first film, but I think it still has a lot of untapped potential that it just hasn’t reached yet. Assuming the third film actually gets made, it might finally cross into the “So Bad, It’s Amazing!” territory that the series is striving for. As for now, it is not a must watch, but more of a watch eventually (maybe) type of movie.