If you know a bit about reality television, you might be familiar with Hell’s Kitchen. A show where Gordon Ramsey yells at people who aren’t good cooks, and eventually someone wins a job as a line cook. It is also the longest running reality show to not have a celebrity season. It is so bad, but I can’t stop watching it. Clearly most of the issues are forced, including bringing in people who clearly wont win. I am not saying certain people are staged actors, but…

Either way, yeah, this movie is called Love’s Kitchen. Clearly a play on that. Mostly because Gordon Ramsey is in this movie as well. 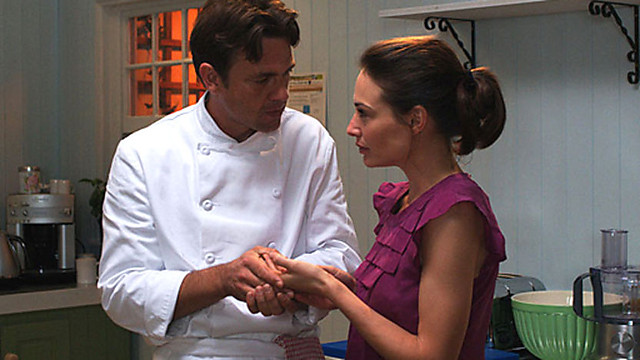 But most notably, he is not at all an important part of the movie.

Instead we got Dougray Scott, a famous chef. But his wife dies. That makes him sad, and his restaurant declines in quality. A famous food critic gives him a now bad review, and he loses business. Well shit. Once your restaurant has a bad review, it is pretty hard to ever come back from that. Gotta have a new place. Thanks to an idea from Mr. Ramsey, who yes plays himself and his friend, he decides to find an old diner way far away and make that diner a new great restaurant.

With hard work, dedication, and rehiring his entire old staff, eventually the restaurant is ready to go. But when right away a food critic who just got divorced, hates me, shows up, Claire Forlani (yes, the chick from Mallrats, what what), she is about to do a negative review. But is seduced by the good food. Yes. She was going to be a bad critic and give a negative review because of it being a man.

So what is the movie about? Him getting over his wife, and falling for the critic (who hangs around still). Oh yeah, and dealing with the small town locals who don’t want increased traffic in their area for some fancy new restaurant. Yes. The biggest dilemma is upsetting the people who were there first, and kinda saying screw you to them. Eventually another, better food critic, Simon Callow, comes by and they try to impress him too. They do. The End?

No. Even though the screen freezes on the two kissing AND goes to black and white, which I actually boo’d out loud for being so cheesy, it actually continues on. Ramsey is talking to someone on his laptop, and once he is done, he closes the laptop, stares at the viewer, and tells them shows over and to get back to work.

Actual last scene. For serious. Why not break some 4th wall for no reason?

Besides the cheesy story, the film was not really that funny. It was an obvious story, but also a bit boring.

No one was really relatable, no real development. Nothing. Just a restaurant that bugs the locals, but is very tasty. And that is about it. Although I disliked the cheesy ending, I wasn’t mad that I watched this movie. I was just bored. I guess I just had high expectations, since Hell’s Kitchen is such high quality Fox programming.