In 2013, our main Doppelganger films were Olympus Has Fallen and White House Down. The former was mostly serious with some jokes, the latter, full on action comedy in the middle of summer.

And you know what? I liked both of them. They had their charms and were unique enough from each other that I didn’t mind their similarities. They both worked and did what they needed to do to make an entertaining product.

But the Movie Gods have spoken, and Olympus Has Fallen has a sequel now, London Has Fallen, meaning it must have been the superior film. After all, the best films always get sequels, right?

And that was with Olympus Has Fallen having a shitty president. I could write a whole review on just why his character is stupid, but no one wants me to rant about fiction. The real presidential situation is crazy enough for us to not need that in our movie lives. 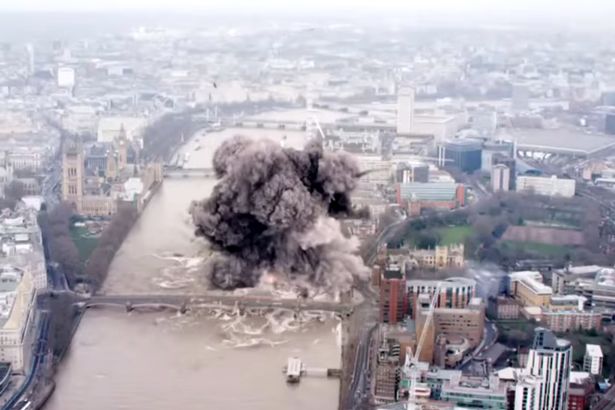 In order to take over London, you first must kill its rivers.

Two years before the events of this film (probably before Olympus Has Fallen? Or right after? Who knows), America did something stupid, as they tend to do. Aamir Barkawi (Alon Aboutboul) was a weapons dealer in the middle east, and he sold big boomers to lots of bad guys. He was a high target and so we drone striked his ass. Of course we also did it at his daughter’s wedding, during a huge celebration with a bunch of bad guys, but who cares, we got him!

And now, a prime minister in London is dead. He died young in his mid-40’s, with a heart attack over night. So now world leaders from all over are heading to London for his funeral with not a lot of time to plan it out. Mike Banning (Gerard Butler) is thinking about quitting the secret service, because his wife (Radha Mitchell) is about to give birth and he wants to be there for his kid. The president is still Benjamin Asher (Aaron Eckhart).

Guess what? Terrorists! They had killed the prime minister and set a huge trap throughout London to kill most of the world leaders. This is of course orchestrated over two years by Barkawi, who didn’t die, just all of his family. Joy. Leaders from France, Italy, Japan, Canada, and more all die, but they can’t knock America down. Now Banning has to lead Asher underground and around London, until the bad guys can all be shot and he can be extracted. Barkawi wants Asher, and he wants to execute him live on the internet for the whole world to see.

Returning characters are still played by Morgan Freeman and Angela Bassett. Jackie Earle Haley is a dude in the war room, and we have MI-6 agents now to help and hurt, featuring Patrick Kennedy, Colin Salmon, and Charlotte Riley, who happens to be married to Tom Hardy! 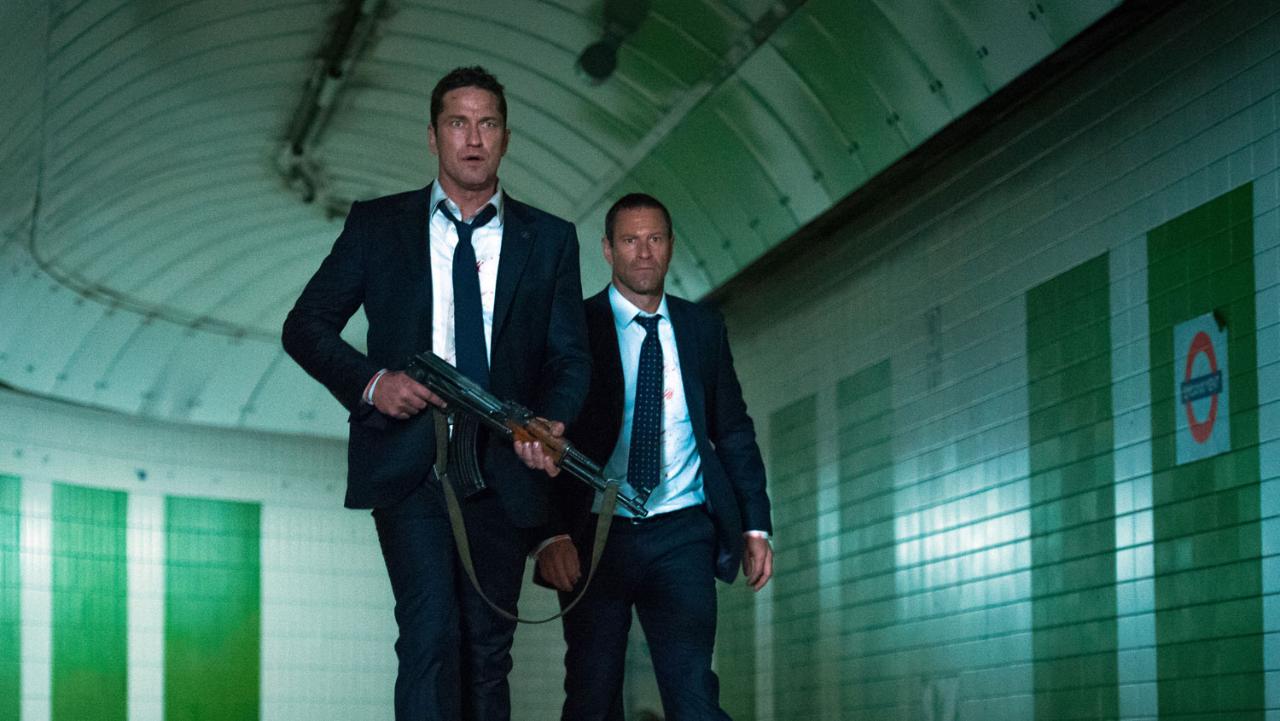 I bet if Tom Hardy was here, they would have escaped right away without all the death.

It is clear that London Has Fallen isn’t as good as Olympus. The terrorist attack in the first film was plausible, given enough time, sure. But the terrorist attack in this film was make every police, EMS, service worker a bad guy in disguise (all of which totally end up being Middle Eastern, cheers), and blow the fuck out of every major landmark. Not all of the landmark, just parts, to show they mean business. In fact, all of the world leaders who die seem to die mostly by accident, not by planning.

All of the destruction and wanton death happens early on with the President narrowly escaping each time. And then it just turns into a simple man hunt for him. This is after they contacted the White House and said they would stop killing everyone if they had the president. They obviously didn’t turn him over, and guess what? The random killing stopped anyways. There weren’t later attacks, or more death, so the good news is America didn’t have really any more death on their hands. The bad news is the movie is full of scenes like that. They sound intimidating, seem like they will lead to somewhere and don’t do shit.

The worst part about all of this is the drone strike that started the whole thing. One would imagine that this would bring some sort of discussion about drone strikes, killing civilians and responsibility of America overseas. That would make sense. It did cause this horrible event to happen in London as a response, and America gets away with it scott-free (spoilers?). But no. It ignores it. It doesn’t discuss the morality of any of this. Not only that. NOT. ONLY. THAT. But it ends the damn movie (again, spoilers), with another fucking drone strike to get the bad guy again. Literally. No lessons learned. No sign of change. Just a nice fuck you, it’s America time.

The only scene I really enjoyed was when Banning and MI-6 agents were storming the bad guys base. It was full of long shots and shooting and was well choreographed. Everything else was lack luster.