Lies are really fun. I am not even talking about big lies, or little white lies. I am talking about minor invisible lies, lies that don’t hurt anyone and can’t possibly come back to harm you. A lie you tell that no one would ever question the need for it to be a lie, because why would anyone lie about it?

“I saw another vehicle give a homeless guy $20 today!”
“An SUV cut me off on I-10, I was so angry.”
“Back in college I once met Michael Jordan. He was at a publicity signing for some new shoe.”

See, these are all lies you can tell your friends and family and they’d have no reason to believe you are lying (as long as you both have a vehicle and went to college years ago, that is). They are the best.

Sometimes “little white lies” can come back to harm you I guess, like saying a dress is not ugly, or something like that, but that is rare.

Little White Lie, however, is not about a standard little white lie, but instead about a big white lie.

If you don’t get my hint, this lady told her daughter she was totally white. 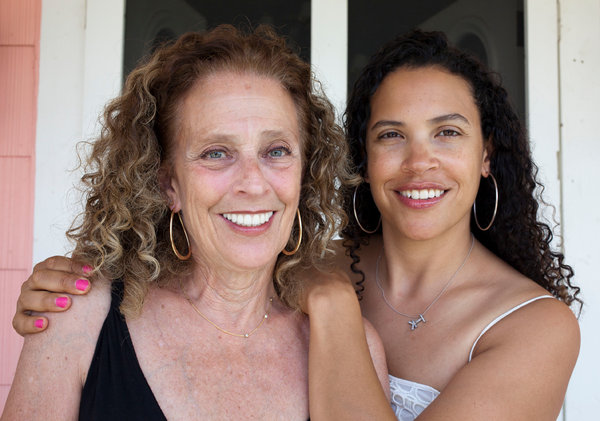 If you squint your eyes, you might see it.

Little White Lie is actually a self made documentary by Lacey Schwartz, about growing up believing herself to be a white Jewish girl, and finding out years later it wasn’t completely true. To explain the darkness of her skin, there was an Italian grandfather, who was super darker and European and it must have came out in poor Lacey. But everyone knew, and no one talked about it. It wasn’t until years later in her teenage years, when Lacey’s folks got divorced did she even really think that much about it.

In case you were wondering, yes, of course, the mother did have an affair with a black man and it was a secret for decades. But this documentary is more than just finding out who her real daddy is. That would be a boring mystery unless it was someone famous. No, his is her own self discovery, on whether or not she can feel accepted in the black community without growing up black. Whether her own family relationships can ever be repaired. Whether she can do any of this before her father, dad, or mother, end up kicking the bucket and find themselves unwilling to talk about their past.

At only an hour long, Little White Lie has a good amount of time to tell the story of learning to accept ones self and tell the story that Lacey wants to tell. However, it never really gets as deep as the topic really required. There were moments of intensity that one would expect when she was talking to her non-biological father near the end and things didn’t go as smoothly as a movie would allow. But they never maintained that intensity enough, giving us only splashes of really interesting story.

Add in the fact that these uncomfortable conversations between a child and their parents were all done in front of cameras leads its own awkwardness, wondering if the conversations are real and heartfelt, or potentially staged with multiple takes.

Either way, Little White Lie does a decent job of telling an okay story over an hour. Just a bit more in depth and raw emotion would have made it truly wonderful.

2 out of 4.
Tags:2 out of 4, Documentary, Lacey Schwartz, Little White Lie