Leap Year has been a very popular topic this year, 2012. A lot more popular than it was the last three years at least.

I like that a lot of different pop culture things seem to be trying to say Leap Day more now, to refer to it like an actual holiday, instead of making the rest of the year participate.

I personally hated the synopsis of the movie when I first heard about it, and kept putting it off. But I have been on an Amy Adams spree lately so might as well watch it now. 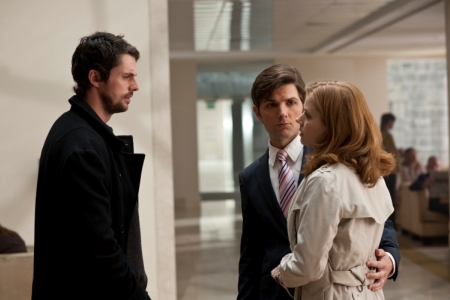 I heard there might be a three way involved.

Amy Adams has been dating Adam Scott for awhile. Her job is to make apartments/houses look good enough for people to want to buy them. Even using such clever tricks as baked cookie smell. Because that is very original.

She thinks the boyfriend is about to propose, but nope, just some nice earrings. Oh well. He is going to Dublin for a business meeting, while they are waiting to find out if they are getting a condo or not. Because of the ravings of her father (John Lithgow), she is reminded of the Irish tradition that “allows” women to propose to men on the 29th of Feburary. And he is going to be in Ireland on Leap Day! Yes! Perfect timing! She is going to take it on her own and fix it, because she is a woman and woman can do their own things. So first, a flight to Dublin!

But weather sucks in the UK. Bad weather. She got /most/ of the way there. Wales. Pretty much made it I think. But whatever. Also she cannot get a boat to Dublin. She has to stay in the village (and somehow finds herself the only traveler there) and hopefully get a taxi to Dublin (is that doable..?).

Seriously. Geographically speaking, is there a way to drive from Wales to Dublin, Ireland? I don’t think so. Because in her travel to Dublin, there is never a time being on a ship. The train she tries to get on she misses, so the main means of travel are hitching, cars, and a bus. So uhh. What the fuck?

Seriously. Why not go on a road trip from Texas to Australia?

So in the village she meets Matthew Goode, who eventually agrees to take her along the way. Problems occur, transportation changes, and the trip keeps taking a lot longer to do. Somehow she realizes she doesn’t like Adam Scott. Who proposes to her when she gets to Dublin (fuck your leap day role reversals!). Why does he do it? Apparently helps them get their condo.

But when a fire alarm happens, she is mad that he grabs a bunch of electronics and leaves him and goes back to the guy she has known for 2 days and made out with some (cheating on her long term boyfriend).

But besides all that shenanigans, and random role changes. WHAT THE FUCK HOW DID SHE GET TO DUBLIN. Seriously did you see that map??

They never got on a damn boat or train. I just checked. No bridge between the two islands. I really have no idea. She also constantly says she doesn’t believe in all the travel superstitions and stuff that characters keep bringing it up, despite basing her whole journey off of one.

I also hate the concept, just like I did before I saw it. ESPECIALLY since the whole point of her doing it was because he was never proposing. But then what happened? He did it. Partially for condo reasons but he obviously loves her enough to be with her that long time.

So then she leaves him after getting everything she wanted. Whatta bitch.