I could never really get into Red vs Blue, but I also never really got into Halo. There could be a correlation there! I tried probably three times to start Red Vs Blue, but never finished season 1 despite liking it. Then years later I would try again, and of course start over to understand the “plot”, eventually stop before season 1 ended, and it continued on and on.

That being said, I am not entirely familiar with anything else Rooster Teeth has done. But they did make a movie, Lazer Team, and after being in theaters for only two weeks, it was released on YouTube Red. YouTube Red is a subscription based YouTube service that has no ads and lets you run it in the background on your phone as a music player. And hey, it has some original shows and movies on there as well, with Lazer Team being one of its first major films to be released on the platform.

I mean, none of this says anything about how good it is. But it does show how neat it is. 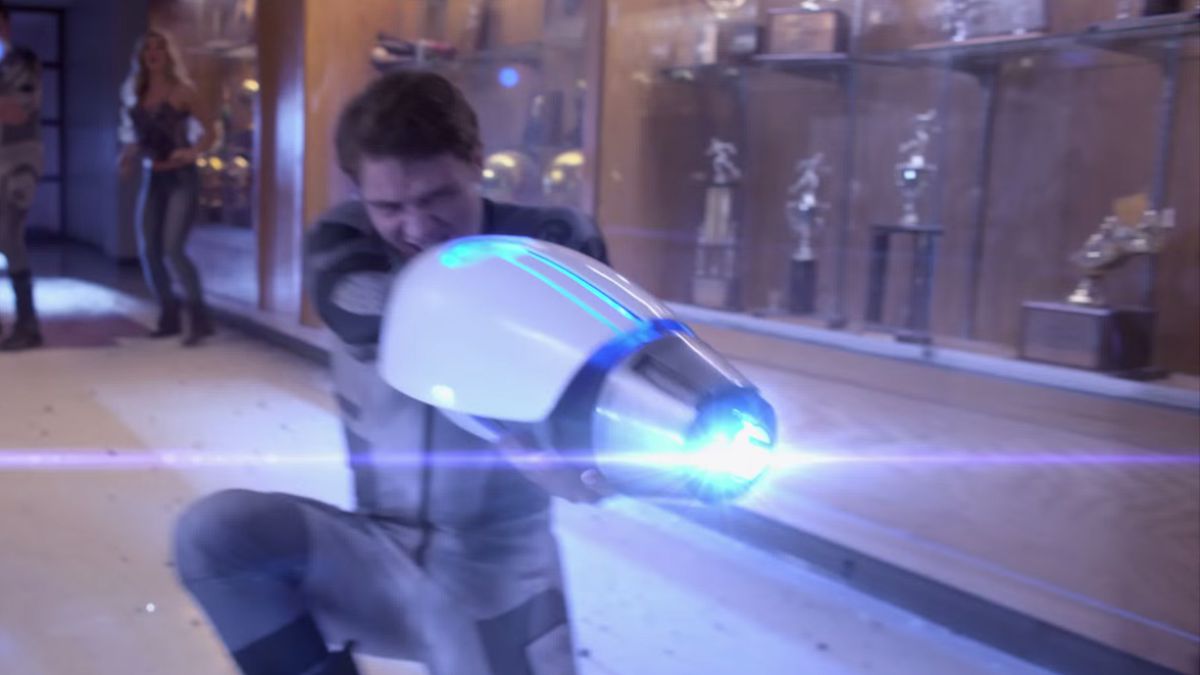 I expect a piles of lasers in a movie with this title. All kinds too. Especially the pew pew variety.

In the 1970’s, the US government received a message from aliens and were able to secretly decode it. They found out that eventually an alien race would come to destroy the Earth. But in order to help them, the Antareans would send them a single power suit a few days before they get there so they would have a chance. So they found a gifted baby and raised him to be the perfect man. Adam (Alan Ritchson) would be the strongest, fastest, and smartest person they could develop, and he would save the Earth one day!

Or not. Now in modern day, after a series of events, we have a few modern slackers and dummies in the same spot. Hagan (Burnie Burns) is a low level sheriff in the small town and hasn’t ever done anything great with his life. He has in his custody Zach (Michael Jones), a talented high school football quarterback, who has the hots for Hagan’s daughter (Alexandria DeBerry) and is an idiot. Herman (Colton Dunn) used to be a quarterback at the high school, but couldn’t go on to college or pro because Hagan missed a block in their last game, giving him a permanent leg injury. And Woody (Gavin Free) is Herman’s dumb friend.

Due to alcohol and arguing, they accidentally end up shooting a UFO out of the sky, before it can make it to the military base. They discover the suit and begin to put the pieces on. Hagan gets a glove that makes a shield, Zach a glove that can shoot lasers, Herman some boots that can make him fast, and Woody a helmet that will eventually make him smarter. They of course don’t know any of this at the time, but eventually the pieces once activated merged themselves permanently to their body.

Which of course means, this group of losers have a few days to figure out how to work as a team, because they are now the only hope the world has. Also featuring Steve Shearer as the main military commander.

Only one of them even has a laser! How sad.

Lazer Team is a small budget sci-fi comedy, and knowing that helps lower your expectations going in. This is not going to be Turbo Kid, which is also an indie film, but had a lot behind it to make it something special. No, this is a movie where plot and effects are secondary, what the creators and actors are really after are the laughs. They want to make you giddy and smile.

And on that note, they still only do just an okay job.

The main character by Burnie Burns (aka one of the greatest names ever), the writer of this film and main member of Rooster Teeth, is playing the straight man so he rarely has the better moments. He is extremely passive and throughout the film I never really get behind him to root for him. No, the only character I care about is Zach, the dumb ass quarterback, because he is the funniest one. Michael Jones looks like a poor mans Adam Devine, but he works well in this film.

They had one character who isn’t smart, get the helmet to make him super smart. Unfortunately, a lot of those jokes don’t have a huge effect, because we barely knew him as a dumb character before the changes started. It did lead to some nice jokes, but most fell flat given the lack of history with him.

Even though the jokes were only just okay, I did end up liking the ending of the film. Some good action and explanation happen and it is an ending that can make one look forward to future films. Just disappointed that some of the action scenes earlier on didn’t seem to pack as much punch.

Oh well. Okay film, good first try, do better next time or I will come down on you with the rage of a lower-tier film critic!