There is a lot going wrong in Syria, and shit, it definitely sucks. It sucks a lot and is still being ignored by regular media. Well, in America it isn’t ignored, but its focus is wrong. It is on ISIS and the the other large forces fighting in Syria, including Russia and America. It is on refugees, but rarely in a positive light. And it is almost always never on the regular Syrian citizens, brought into this war against their wills and fighting for their lives just to exist in the home they have known all their lives.

That must be why there are so many documentaries about it. Hell, we had City of Ghosts come out in 2017 as well, I reviewed it halfway through the year. It was the true story about the Syrians who became journalists to reveal the problems with ISIS to the world, the torture and brutality of their regime.

And two years ago we had The White Helmets, which was nominated for and won Best Documentary Short. It was about the civilian group of volunteers, The White Helmets, who run to blast sites to check for injuries, look for survivors, and help those who were hurt. They are heroes!

And this movie, Last Men In Aleppo is about…um, The White Helmets again. 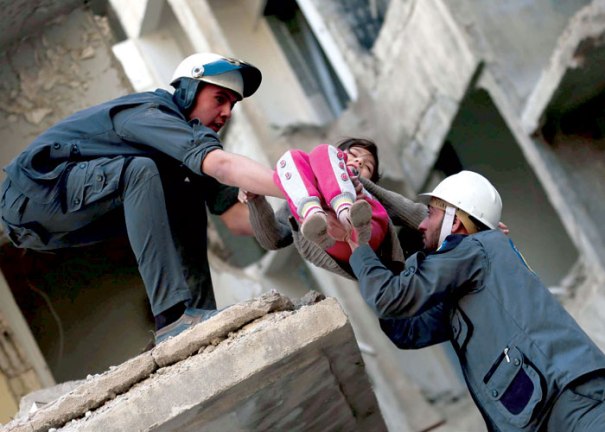 For real. This documentary ends up following along members of The White Helmets, as they hang out with their family, as they save other families, and as they put their lives on the line and die to help others.

It is a life of messes and chaos and sadness. And yet, unfortunately, I have already seen it all before.

Thanks to the docuemntary short, this group is already known. They won a goddamn award for it. And this documentary just told more of their story. It didn’t give me really new information, just new people doing the same things.

And maybe that is a bad way to grade this. Doesn’t matter though. I want to see documentaries to learn things, and this one didn’t really let me learn anything.