When I saw the poster for Lars and the Real Girl years ago I assumed it had to be some sort of joke. If not a joke, then some sort of horribad movie, that was on the levels of Epic Movie and other such trash. Some comedy where they have a guy buy a sex doll, and treat her like a real person? Go bowling with her maybe? That sounds stupid.

And it would have been. If it was a straight comedy “oh look at how silly that guy is!” type of thing. Instead it treats the subject way more seriously, involving social disorders, and a whole small christian town coming together to help one person. 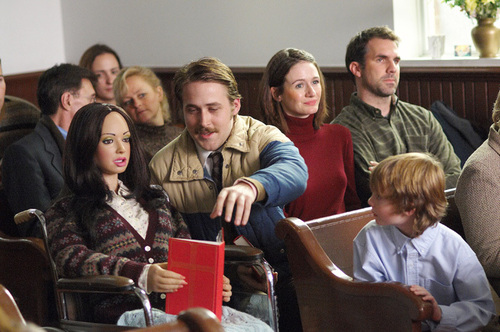 You know. If that bitch Bianca would stop talking so loudly in Church.

Lars (Ryan Gosling) is a weird guy. He lives in the garage of his brother (Paul Schneider) and sister-in-law (Emily Mortimer). He tends to keep to himself, goes to work, rarely talks to the cubicle-mate, goes to church, sits in the back trying to not make a sound. Never goes to the parties that people throw, or special occasions. Work, church, home. Hell, despite Emily’s best efforts, most of the time he refuses to come eat meals with them. She really wants to break him out of his shell.

Well at work he finds out about the anatomically correct love dolls. Next thing you know, he is telling his family he has a girlfriend, who flew in from Brazil, but she doesn’t speak much English, and is in a wheel chair. They are excited! Sure she can stay in one of their rooms! Sure she can come to dinner. And yeah, Bianca the love doll.

They convince him to take her to a doctor, Patricia Clarkson, who also is a psychiatrist, who lets Lars know she has to come back every week, mostly so she can talk to Lars and work this stuff out. From his social disorder, she realizes no one could convince him that she isn’t real, so she makes the family go along with it. And this spreads to the church, work, and whole town. Perhaps most upset is Kelli Garner, who plays Margo, the office worker who really liked Lars, but not that he has a woman. If she looks familiar, it is because she was in Pan-Am, but that had 12~ episodes, so she probably doesn’t look familiar.

Soon the whole town is using Bianca, and she is volunteering at more and more places, with the help of Lars. Lars begins to come out of his shell, hold better conversations with people, even when Bianca is not around. But how will he cope when Bianca’s sickness turns deadly? 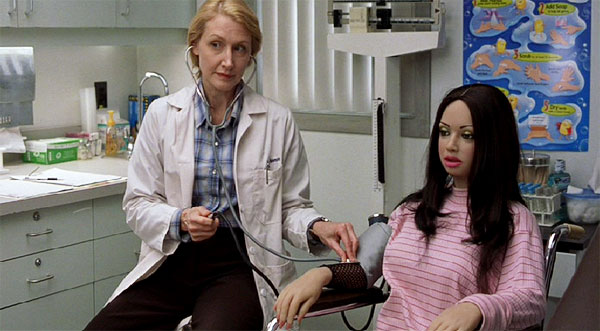 “This woman has no pulse!”

Overall, I was astounded at how good this movie was. The acting was phenomenal on all parts, and it seemed to capture the essence of a small Northern/mid-west Christian town. Or at least what I imagine what those are like from the movies.

This is years before Ryan Goslings more famous performances from 2011, Crazy Stupid Love, Drive, and The Ides Of March, yet it turns out he kicked ass back then too. A lot of his acting had to come from facial tics, and the way he spoke, but the whole time you felt bad for the guy and hoped he could eventually himself become a real man.