The easiest way to describe Land of the Lost is that it is nothing like the TV Show Land Of The Lost. Going in, I expected it to be very similar, in terms of characters, rough plot, etc, but instead all that really happened were the obligatory shout out references to the old show, without taking anything really that deep. But what else would you expect? That is an old show, and this is a new movie!

Will Ferrell is a scientist who believes in different alternative dimensions, and people make fun of him. After a few years of “laying low” another doctor, Anna Friel has some more information to test his theory! She found a fossil with a cigarette lighter imprint. They go to get readings at this lame water raft ride lead by slacker Danny McBride where she found the fossil. Somehow, though, it opens a portal to a different land! Ahh dinosaur!

They meet Cha’ka (Jorma Taccone), a monkey hybrid thing. After more dinosaur trouble, they run into the Sleestaks, weird lizard people. The one they meet says the others are trying to take over the world. So they help him. Lalala adventures, dinosaurs, mosquitos, drug like fruit, and betrayal. Eventually they get back though, and all is right. 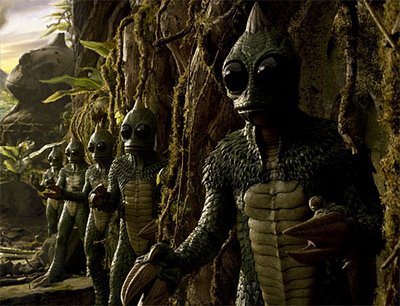 Well. All is right in the movie. But the movie still exists, so real world-wise it is not all right.

I guess I can start with the positives! This movie is a lot more risque than I thought there would be. With a long drug scene, and experimentation, and other sexual jokes, I realize now why it got PG-13. Danny McBride wanted to be himself, and they let him push the limits. His final scene too was pretty shocking. Technically not a kids movie!

But they still tried to make it way too kiddy. The CGI is horrible, very low budget, the plot was weak and boring. And overall it just was not satisfying. Just a mess on the screen, and every once and awhile a chuckle (but is it out of humor, or thinking “Oh they said that in a kids shoW!”? We will never know.)

1 out of 4.
Tags:1 out of 4, Anna Friel, Comedy, Danny McBride, Jorma Taccone, Land Of The Lost, Will Ferrell