Dreamworks is known as the CGI-animation company that is not Pixar. More or less, everything Pixar does is instantly praised, while everything Dreamworks does is hated on. Sure, Pixar has more good movies, but damn it, Dreamworks has some good ones too.

Like the first Shrek. And Kung Fu Panda. The first one got about fifty sequels, the latter so far only has Kung Fu Panda 2. And it is more epic than the first. 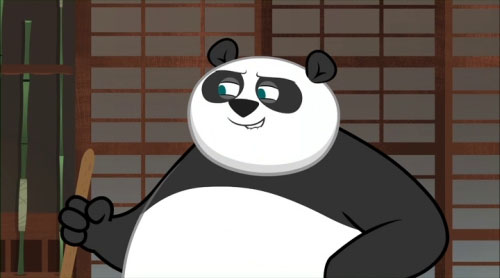 But Kung Fu Panda also lead to the worst rip off in recent years.

The plot of the movie is similar to the first. Someone is kicking a lot of ass and is evil, and needs to be stopped. This time, instead of training montages and noodle shops, Po (Jack Black) starts out as a kick ass warrior. The dragon warrior! Which we all know he became later in the first film. Now we get to ignore all of that, and go straight into lots of fight scenes.

One of the central plots is that Po realizes the goose is not his real dad! Shocking, I know.His parents were killed as a boy and he was orphaned. Killed by who? A peacock. Or at least an evil peacock (Gary Oldman). While they originally thought his threat was dealt with, he has been hiding away, building an army of wolves and gorillas, and making a weapon that renders kung fu and other fighting types useless. (Its based on fireworks, aka pretty).

Speaking of pretty, the CGI in this movie is fantastic on Blu-Ray. Everything was wowable, and noticeably better than the effects in the first movie. In addition to the normal CGI, during flashbacks to Pos youth, they used a more traditional style of Asian cartoon work, and it was pretty damn nifty. I’d have liked it if the beginning had a story similar to the one Po made up in the first to open the film. Had some of the better lines.

The end of the movie also does what a lot of movies try to do and fail. Give us both a full story, and set up a possible sequel. I have reviewed numerous movies that have focused more on setting up a sequel than giving a satisfactory ending. But this one does a nice job and I want there to be a Kung Fu Panda 3. 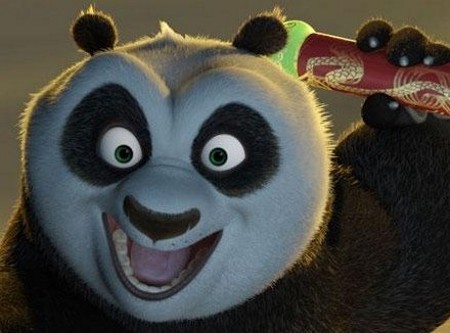 Oh don’t look so shocked Po. I will let you wait at least three years first.

Overall? The fight scenes are pretty great and creative. I am sure Chan had a lot of influence on how they were developed, since he has a knack for that sort of thing. They were also comedic enough to laugh without taking away the seriousness of the fights/plot. Everything was weaved together well, plot, action, backstory, effects. Just the “inner peace” plotline seemed forced. Or Po is just that awesome. Not sure.