I have no idea why Kingsman: The Secret Service got moved from November 2014 to February 2015. February/January are generally deader months where a lot of shit goes, so it feels like the studio just didn’t think it would be good enough to make it. So they put it at the beginning of the year to hide it.

That is clearly what is going on with Jupiter Ascending, which got pushed out of Summer to February, which means they don’t think it will succeed as a blockbuster.

But this is Kingsman, and the trailer actually looked interesting. Damn it. WHY DID THEY MOVE IT? 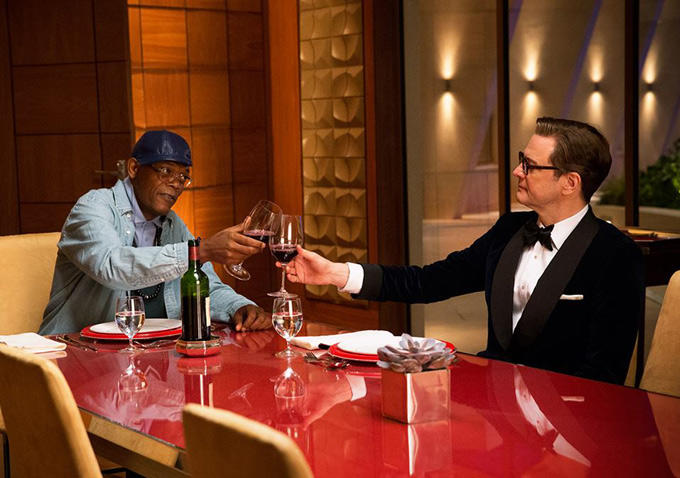 I can only hold on to my butts so long in anticipation!

Back in the day, Great Britain decided it needed to protect the world. That is a bit of paraphrasing. Either way, they made a secret service, based on the Knights of the Round Table. Each soldier is incredibly well trained, combat, spy gadgets, code names, Gentleman as FUCK, and lives a thankless life as they can never let their existence be known.

Galahad (Colin Firth) didn’t notice a bomb one time, and one of the new recruits died saving his life. He wanted to help out his family, so he gave them a medallion with a number on it to call if he ever needed help.

Now, seventeen or so years later, Eggsy (Taron Egerton) is in trouble. Sure, he is a smart lad (British terminology), but he has wasted his life living on the streets. His mom never got over his dad’s death and is now dating an alcoholic. He is involved with gangs. He runs from the cops!

And guess what, he needs help. Quite obviously, Galahad thinks he has what it takes. They need a new member as one of their own was slashed down by rich tech billionaire Valentine (Samuel L. Jackson) and his assassin Gazelle (Sofia Boutella).

So you know, training, spy stuff, gadgets, a shit ton of action, and everyone talking super funny.

Also with Jack Davenport as Lancelot, Mark Strong as Merlin, Michael Caine as Arthur, Sophie Cookson as the female main lead/training rival, and Mark Hamill as a professor. I normally wouldn’t even bring him up, but I mean, come on. Mark Hamill.

“I came here to drink tea and give someone a good going over, and the Americans dumped all of my tea.”

Right before the movie started, I found out it was 129 minutes and thought it was way too long. Now that it finished, I found myself only wanting more.

Kingsman is based on a comic by Mark Millar, the same man who wrote Kick-Ass. Hey. Matthew Vaughn, the director, also did Kick-Ass! How quaint! Matthew Vaughn had to leave Days of Future Past to do this movie, and that is fantastic, because it made it so we got two pretty awesome movies instead of maybe two terrible ones. I can’t believe how entertaining Kingsman ended up being. The action was high octane and firing on all cylinders, and the movie built a bigger body count than you would probably expect.

Samuel L. Jackson was in it, and of course he kicked ass as the villain. He had so much personality, I was almost rooting for him by the end. Colin Firth is usually fantastic when he isn’t in a super serious role as well, and I wonder if he backed out of Paddington to build up his R-Rating persona. Another movie with questionable things going on.

I mean. Honestly, the only thing I found super disappointing, was some really awkward stuff that happened at the end. It just felt so forced and childish. It felt like a 13 year old wrote the last minute, almost. It will be very off-putting to people, even if they enjoy it.

Kingsman may be truly the first very entertaining movie of 2015, and it helped kick start my hope for some unique things to come through the pipeline this year.