Thanksgiving movies really don’t exist, so in general, my Thanksgiving reviews have had one theme. Parts of Thanksgiving dinner. And no, I haven’t reviewed a movie called Turkey yet. But I did review both Butter and Milk, so my dairy should be done. Let’s start with some of the main sides.

King Corn is a slightly older documentary now, 2007, which is the old limit for reviews from my website. I try not to do anything before 2009 now, unless there is a special occasion. Like…a holiday!

King Corn is a decently famous early documentary about corn and how it has infiltrated our very existence. I am willing to wager before this documentary, it wasn’t as common knowledge what was happening in the corn industry and how it affected everyone in the United States. And maybe, just maybe, how it made us fat. 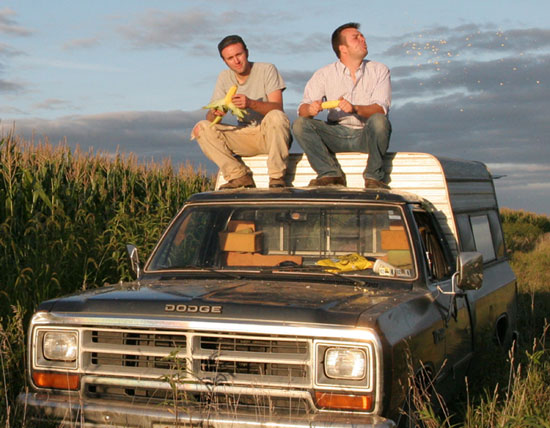 Those two boys are going to eat the entire field on that truck. That’ll do it.

The two main guys are Ian Cheney and Curt Ellis, two friends who moved from Boston to Greene, Iowa to have an experiment. They both have family roots back to this area, and they asked to borrow one acre of someones land, to grow corn, to see how the whole process works, and see how much money they can make.

Of course, once they do, they find out how everything is paid out to them by the government, and purely in terms of how much land they produce. But the farmers and now have much bigger farms than ever before, and produce way more than is necessary, but the flat rate from the government makes it okay to do that. They don’t have to worry about the economy fluctuating, just the growing and production of corn.

And now corn is in everything in terms of high fructose corn syrup. Literally everything. Pure sugar. Maybe making us fat? Definitely doesn’t help.

Either way, this was a very eye opening documentary at the time, but given in such a simple way. It is about two guys farming, so of course it is a simple story, but it isn’t able to go hard after anyone driving the factors. It can’t get us into a corn syrup factory, we don’t get to hear from any policy makers. Just farmers farming, mostly. And so a simple documentary, although interesting, gets a simple grade.