Is Kindergarten Cop good? I honestly don’t remember. My memories of it are fond, but that is based entirely on the 2-3 jokes I can actually remember. It came out 26 years ago and is probably objectively bad, but since it starred Arnold Schwarzenegger and was directed by Ivan Reitman we can look back on it with some sweet ass nostalgia glasses.

So why the sequel? Fuck if I know. The rights were there, the plot was easy to put forward, and it would involve a large man dealing with kids. Basic 90’s comedy gold. I mean, that is when we also got Mr. Nanny! Nothing funnier than seeing someone with muscles do woman work and deal with shit head kids.

This would be the world gone mad should there ever be a KC3.

Agent Reed (Dolph Lundgren) is your typical tough guy, no nonsense, detective. His current worries involve getting a Zogu (Aleks Paunovic) into jail. Just your normal bad guy. They have someone in witness protection, Katja (Rebecca Olson), who was a part of his organization and is going to tell everything to put him behind bars.

Thanks to some Zogu shit, we find out that the servers may have been hacked in some way, and now a flash drive exists with the names and locations of everyone on the witness protection program. Zogu wants that flash drive to kill Katja and then no case can be made against him (outside of him killing Katja). But the flash drive was in the possession of a kindergarten teacher who is now dead.

Apparently the kids would know where it was, but after interviewing a few of them they find nothing. So they feel the only thing they can do is for Reed to go undercover and find the flash drive by interrogating them in a friendlier setting. But those darn kids are just so damn annoying.

Argh! Worst assignment ever, am I right?! 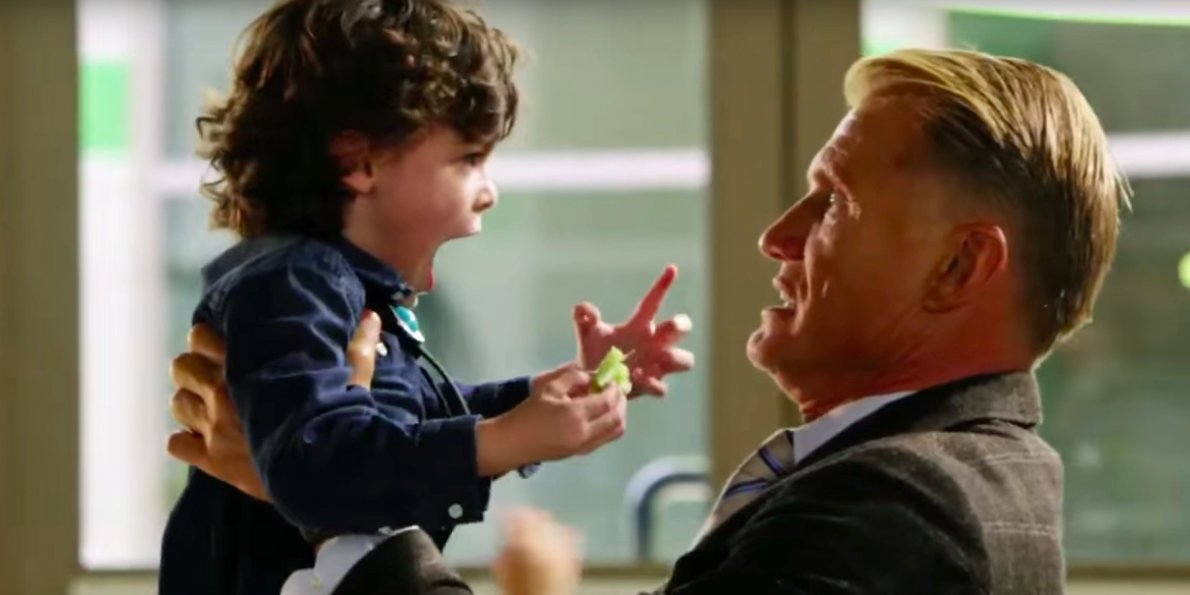 To be fair, this movie is probably very similar to the first one. I don’t remember. KC ended with the night scene at the radio tower or something right? Only one kid mattered. In this film the whole class was involved at the end, because then you can see little kids pummeling a bad guy. Hilarious!

But I found out the point of this movie. It was to complain about kids these days. That is about it. Schools coddling kids, not allowing things like peanut butter, or chocolate, and being nice and equal and shit. That is where half of the jokes come from. Like it was written by some old geezer who just doesn’t understand change.

The action? Not important or exciting. The Lundren/kid interactions? Not too great. Predictable. Standard.

Kindergarten Cop 2 isn’t even the type of film you would want to put on Netflix while cleaning your house. It is the type that you never watch. Ever. Just don’t.