Jennifer’s Body is listed in the Comedy section at Blockbuster. I think that statement is enough to show how the general public perceives this “supposed to be horror but also kinda not ish” movie.

But this movie is brought to us by the same girl who wrote Juno! It must be good! But if the same level of writing was used in both movies, it is clear what made Juno work was the actors and actresses involved, not the script. 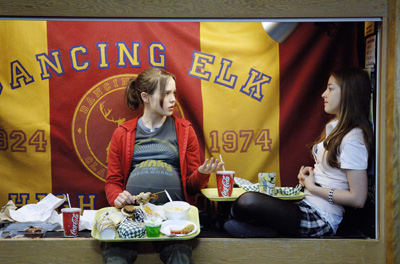 Both movies cater to a different fetish group though.

But they go to the only bar in town to see some indie band play a gig, named Low Shoulder, with the frontman being played by Adam Brody. I have been told he was trying to imitate the lead singer of The Killers with his performance, but I really couldn’t say! Anyways, a FIRE happens, and a person dies in it at the bar! Next thing Needy knows, Jennifer has disappeared with the band, and has no idea whats going on. Then later she appears at her door, all being creepy and covered in blood!

Then some people die in the school, namely boys. Who is doing it? Well, Jennifer is. Because she is some demon now, and only Needy seems to realize it. It is like the girl she used to know, is no longer there, but what has remained is Jennifer’s…body. Oh yeah, if you want to see both JK Simmons in his ugliest and worst role ever, this would be a great thing to pick up. In a movie that has gore, death, Megan Fox acting, this is still the grossest thing.

So, somehow, according to the writer, this is a movie about women empowerment. But I get absolutely nothing like that. All I see is a movie trying to use T&A to sell tickets/dvds, with a pretty dumb and badly acted plot. Oddly enough, one of the reasons Megan Fox didn’t like working in Transformers is because she thought she was being exploited for her looks. Huh. Then she did this movie? Glad you have your priorities straight.

I need Amanda Seyfried to get out of these dumb teen movies right away. She was funny in Mean Girls, and was one of the stars in Mamma Mia!, but then she did this and Red Riding Hood? Stop it right now Amanda.

I have also heard this referred to as “Twilight for Boys” in the good way. What?? That would be assuming that guys only care about “hot” looking womens in their movies, nothing more. Clearly this is just offensive to guys (which may be pro women empowerment? Who knows.