Whoops! I may have accidentally watched two “indie” movies on the same day. Whoops! Both of them happened to have Kate Mara in them! Maybe it was an accident, or maybe I did it on purpose. 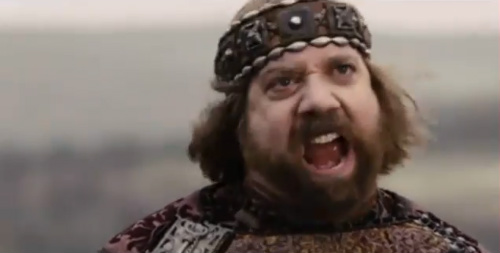 Or maybe I did it for this face.

I actually thought that this movie had something with heavy metal and medieval knights. Turns out, Ironclad is actually a very historical based film. This is the “True” story of post Magna Carta signing England. It involves siege stuff! According to other people, most of it is is correct, including how the fights happened and the armor used. Even though I am a ancient history major, I tend to dislike medieval based history or films. They always seem so full of themselves. This kind of did that as well. It had some larger boring parts, because parts of history are boring. Also it became a bit hard to follow at certain parts, as I continued to forget where they were at that point.

Paul Giamatti plays King John. Big shoes to fill, but also means he gets to play an asshole, which is 95% of his roles anyways. Similarly James Purefoy was a great protagonist. Lots of blood and fighting in this. Kate Mara plays the Purefoy crush, which is understandable. Apparently she sings the anthem some times are NY Giants games. Her grandparents founded the Giants and the Steelers, but fuck the Steelers.

And fuck the Penguins too.

I was super tired during the first half. So I may have missed a few things. It is surprisingly well done for a smaller budget, but unless you are a fan of the times probably won’t enjoy many rewatches.