In America, it is Father’s Day. Which means absolutely nothing, really. Most dad’s want the same thing. To be left alone and relax. And thus my movie review for today is Iron Sky, a movie about relaxing.

And not about fathers.

And all about Nazis. 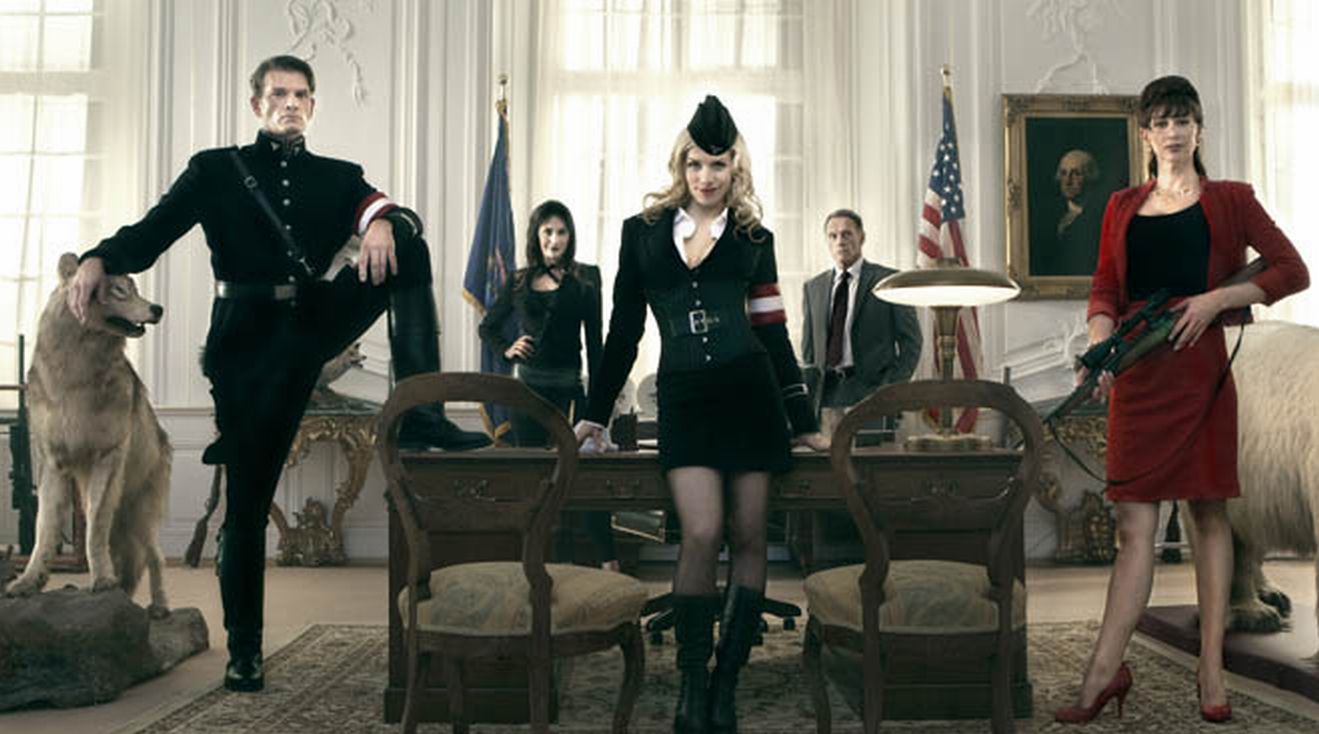 Look at them. Nazing all over the place.

The year is 2018, the future! And the president of the united states looks a lot like Sarah Palin, but she isn’t given a name (Stephanie Paul). Well err, alright. So she had the idea to send man to the moon again, because it would help gain her some positive votes and stuff. Well, when they reached the dark side of the moon, the astronauts found a huge base! And one was shot in the head, the other captured and their shuttle destroyed. The astronaut is James Washington (Christopher Kirby), a model who is also black, and put on the moon with no real experience. His captures? Nazis!

The Nazis are confused by him, because he isn’t even white. What the hell is USA doing? They must have found them out and he must be scouting ahead. But he refuses to give up the information. The head Nazi (Udo Kier) agrees to send Klaus Adler (Gotz Otto) down to earth to speak to the President and potentially find information before war is declared. They have to find out about this new computer technology, allowing James to have a damn phone.

Klaus is sent down to Earth secretly (not discovered?) with a transformed James Washington (they made him Aryan), and also the local teacher snuck aboard as well. Renate Richter (Julia Dietze) knows English, and also might like James, despite his clearly non perfect genetics. They are able to meet with the white house PR lady (Peta Sergeant) who actually uses the Nazi messages of unity and turns them into a campaign for the Presidents upcoming election.

Can these Nazis escape the lavishes of the modern world, and reign destruction? And when the Nazis do come attack full force, can they actually stop them? Also, how the fuck are they living on the moon and shit? Hopefully the answer doesn’t start World War III.

Dude doesn’t even know he is white yet.

This film is actually foreign made, and produced by the Finnish, Austrians, and yes, the German. Germany making fun of their own past? The future is now folks.

The film isn’t a traditional comedy, but more comedic in the unrealistic nature of the whole plot and characters. Some jokes are made, but most of the laughs will just come from how over the top it is. Not only that, but the film is already planning both a pre and a sequel. Ridiculous Europeans.

I did enjoy a lot of the movie, but really can’t see sitting down and watching it again unless it is with a bunch of people who haven’t seen it. I am glad the movie agreed with me, that the USA owns the moon as well. I mean hell, we got there first (well not in the movie’s universe) and put up a flag. Putting up a flag is the universal sign of ownership. Go in knowing what it is, a ridiculous science fiction movie. Yet also entertaining, and better than the bad SyFy movies.