In Time is a movie with a great science fiction plot, but going more the yay action movie route. This disappointed me, I will tell you up front. I think this movie could have been a LOT better had it focused more on some of the cool aspects of the world. Only thing we really know is that it is the future and somehow, the time stuff happened.

What time stuff? When people get 25 in this world, they stop aging physically…somehow. At that point they have a year on their time that counts down, they can accumulate the time, or spend it. No currency, people just spending and selling their own time. So some people who were born into wealth have thousands to millions of years available, so they can live forever. And stay young to boot.

Which is why this should make you uncomfortable. This is a rich guys mother in law, wife, and daughter, in that order.

Justin Timberlake is your everyday average guy. Living with his mom, because his dad died long ago, he is working with other people at the factories in a lesser time zone. His friend, Johnny Galecki (who they don’t even try to make look 25) is also struggling. Him and his mom, Olivia Wilde, are living day to day. That is until…

Some hot shot with a century of time hangs around the bar! JT saves him and, while he is asleep, the mysterious guy gives him most of his 100 years, except for the last 5 minutes. When he walks away to die, they assume it is JT’s fault. They being the time keepers, aka the police, and especially Cillian Murphy, who has been doing this for over 50 years.

Eventually, after some plot points, and questionable actions, JT decides its time to go all the way up to the big times. The best Time Zone. He is good at gambling, so he wins himself a lot more years. He also gets to meet Vincent Kartheiser, who is kind of the richest man ever, apparently. He also meets his daughter, Amanda Seyfried, if you know what I mean. It takes awhile to recognize that it is Seyfried too. In case you didn’t know, the chick on the right in the earlier picture is her.

So yeah. More stuff happens. Run from the law. Down with the man. Destroying the society. More people die. Questionable ending. And done! 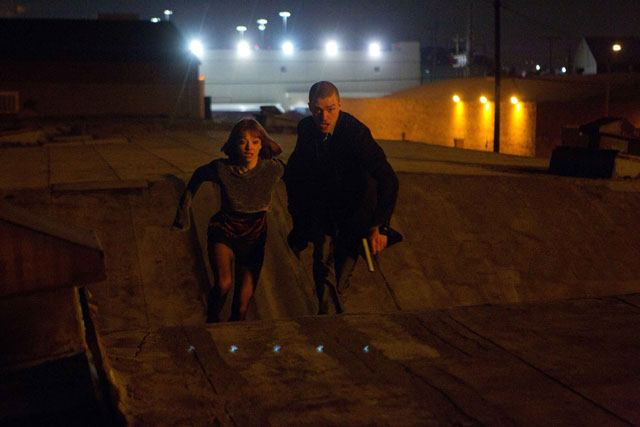 I really wanted this movie to be awesome, but I had some issues with it. One was the lack of any real information to how this society could be formed. It also seems pretty unstable. For some reasons these people in the poor areas are just going to keep having kids, despite the fact that they will be pushing them into a life of poverty that they cannot climb out of, and early death, so to speak. So eventually the “workers” should all die out, and pretty quickly, leaving only the rich and no way for their society to work.

Also, the motives of JT were questionable. After an early “oh man, sad!” event, movie watchers couldn’t even dwell on the sadness. Because the next scene was already happening. The evidence the timekeepers have that makes them initially question JT is crap, because it also shows his innocence. Then every once in awhile, I didn’t know what was going on. The final “running scene” which also involved a very unwarranted death of a character, was confusing because we had no reason what they were running too.

Unless they were just running into confusion. So I think a lot of the film could have been better, but as it is, pretty disappointed.